Catch up with Football Gossip Live on the BBC Sport Facebook page. We discussed all the big transfer news, including the twists and turns of Philippe Coutinho's future at Liverpool and Danny Rose's comments about Tottenham.

Borussia Dortmund and France forward Ousmane Dembele remains Barcelona's top target, with the Spanish side set to return with an improved 140m euro (£127m) bid for the 20-year-old. (AS)

If Barcelona fail to sign Dembele or Coutinho, they could pursue 28-year-old Inter Milan and Croatia winger Ivan Perisic, who is a long-term target for Manchester United. (Sport Italia via Football Italia)

Paris St-Germain midfielder Angel di Maria, 29, has emerged as a surprise target for Barcelona as they seek to replace Neymar following his move to the French club. (Sport)

PSG have offered 18-year-old forward Kylian Mbappe an annual salary of 18m euros (£16.4m) over five years to convince him to leave Monaco. (L'Equipe - in French)

Mbappe is keen on a move to PSG but no deal has been reached and the transfer may not happen this summer. (ESPN)

Real Madrid have ended their interest in Mbappe and could turn to Chelsea and Belgium attacking midfielder Eden Hazard, 26. (Don Balon via Daily Star)

Chelsea have yet to return with an improved bid for Leicester midfielder Danny Drinkwater, 27, after the Foxes rejected a £15m offer earlier this summer. (Telegraph)

Tottenham are in talks to sign Ajax centre-back Davinson Sanchez, 21, for £35m. (Mirror)

Real Madrid and Spain midfielder Isco, 25, now has a release clause of 700m euros (£637m) after signing a four-year deal with the option of a further season. (AS)

Burnley will submit a £15m bid to sign Leeds and New Zealand striker Chris Wood, 25, to replace Andre Gray, who left for Watford this week. (Sun)

Leeds have rejected a £12m offer - believed to be from Burnley - for Wood. (Yorkshire Evening Post)

Leeds have lined up Hamburg striker Pierre-Michel Lasogga, 25, as a possible replacement for Wood. (Bild - in German)

Swansea will offer £20m for former midfielder Joe Allen, 27, despite Stoke saying the Wales international is not for sale. (Mirror)

Tottenham have made an approach for 20-year-old Celta Vigo midfielder Pape Cheikh Diop, but face competition from French side Lyon. (Daily Mail) 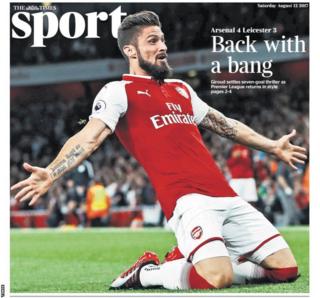 Most of Saturday's back pages have a theme - first up, The Times

Star Trek and X-Men actor Sir Patrick Stewart says he turns up to filming in his Huddersfield shirt when the club are playing and also gets sent a recording of the side's matches by the Premier League newcomers. (Times - subscription required)

Paris St-Germain defender Thomas Meunier has posted a photo of himself with fellow right-back Serge Aurier - who is reportedly set to leave the French club - with the caption 'se queda' ('he stays') in a parody of Gerard Pique's photo with Neymar before the latter left Barcelona for PSG. (Twitter)

Meunier himself is pushing for a move to Real Madrid as he does not want to be second choice to Dani Alves. (AS)

Likely competition from Amazon could force Sky to pay an extra £600m each year to retain the rights to the majority of Premier League matches. (Guardian)

Everton have been one of the big-spending sides in the Premier League this summer but manager Ronald Koeman says his side are not yet on the same level as the top-flight's top six. (Daily Telegraph)

Arsenal have offered Chile forward Alexis Sanchez, 28, a new contract worth £300,000 per week, to make him the Premier League's highest-paid player. (Daily Mail)

Juventus are prepared to offer £23m to try to persuade Liverpool to sell German midfielder Emre Can. (Gazzetta dello Sport via Daily Mirror)

Rose got a "heroes' welcome" from the Spurs dressing room, with team-mates threatening to speak out. (Sun)