Catch up with Football Gossip Live on the BBC Sport Facebook page. We discussed all the big transfer news - including the twists and turns over Philippe Coutinho at Liverpool and Danny Rose's comments on Tottenham.

But manager Arsene Wenger has admitted Arsenal are "not super optimistic" that they can convince the 28-year-old forward to extend his contract. (SFR Sport - in French)

Juventus are prepared to offer £23m to try to persuade Liverpool to sell German midfielder Emre Can. (Gazzetta dello Sport via Daily Mirror)

Rose got a "heroes' welcome" from the Spurs dressing room, with team-mates threatening to speak out. (Sun)

Tottenham stars are lining up to leave because of the club's rigid pay structure. (Daily Mail)

Manchester United manager Jose Mourinho has prioritised signing a first-choice left back with Tottenham's Rose, 27, one of the players under consideration. (Daily Record)

Everton boss Ronald Koeman has told Spurs they will not be able to sign midfielder Ross Barkley, 23, on the cheap. (Daily Star)

Arsenal believe they have made a breakthrough in the negotiations to keep Mesut Ozil at Emirates Stadium, with the 28-year-old Germany midfielder giving the impression that he is preparing to accept the £225,000-a-week deal on offer. (Sun)

PSG could be willing to offer 28-year-old Argentina midfielder Javier Pastore to Atletico Madrid as part of a deal for Slovenia goalkeeper Jan Oblak, 24. (AS)

Arsene Wenger says Chelsea boss Antonio Conte should call back some of his loan players if he is worried about the size of his squad. (Times - subscription required)

Samir Nasri's hopes of leaving Manchester City could be scuppered by the club's £10m-plus valuation of the 30-year-old French midfielder, in addition to the player earning £9.6m in wages. (Daily Telegraph)

Leicester City boss Craig Shakespeare says he is not losing sleep over the threat of losing players before transfer deadline day. (Daily Star)

Newcastle boss Rafael Benitez fears he will miss out on Arsenal striker Lucas Perez, who would prefer a move to Deportivo La Coruna. (Daily Express)

Stoke City are trying to complete the £7m signing of Porto's Dutch defender Bruno Martins Indi, 25, in time for him to be eligible to play against Everton on Saturday. (Sky Sports) 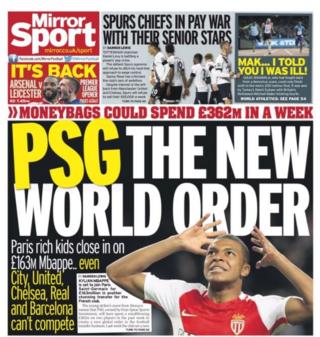 Manchester United boss Jose Mourinho says he will be off social media "for a while" to concentrate on the Premier League. 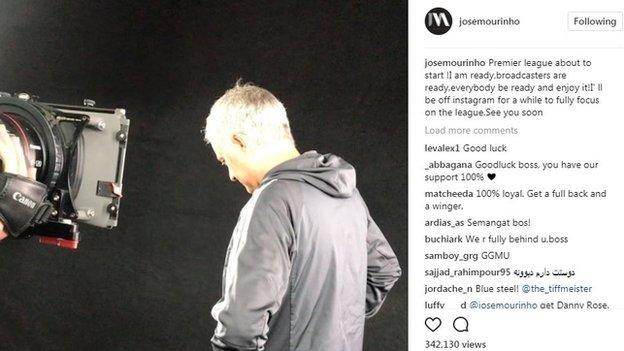 Vinicius Jnr, 16, who is set to join Real Madrid in 2019 for £38.7m, scored his first professional goal after just 30 seconds for Brazilian side Flamengo. (Marca)

Zlatan Ibrahimovic has posted a video of his gruelling workout as he returns from injury. (Instagram)

Petr Cech has proved he is not just an able goalkeeper on the football pitch, but also on the ice. (isportTV)

Marouane Fellaini's facial expression when he was hit by a ball in the Super Cup on Tuesday has been immortalised in a mural in Australia. (ESPN)

Liverpool are stepping up their interest in Gremio's Brazilian forward Luan, dubbed 'the new Ronaldinho', by sending a scout to watch the 24-year-old. (Daily Mirror)

Middlesbrough manager Garry Monk is adamant that 24-year-old defender Ben Gibson, who has been the subject of interest from Southampton and West Brom, is not for sale. (Daily Mail)