Barcelona want to sign Liverpool's Brazil playmaker Philippe Coutinho, 25, by the end of the week. (Mirror)

But Liverpool are refusing to sell Coutinho, as a Barcelona delegation flew to England to negotiate a deal. The La Liga club are willing to up their bid to £120m. (Star)

Real Madrid president Florentino Perez has told the media in a public statement that the club have no plans to sell Gareth Bale, 28, following interest from Manchester United. (Star)

But privately Perez has told Jose Mourinho that he would be willing to let the Welshman leave. (Diario Gol via Daily Express)

Manchester City have made enquiries about the availability of Barcelona's 29-year-old midfielder, Sergio Busquets. (Onda Sera via Manchester Evening News)

Inter Milan have joined the race for Leicester's playmaker Riyad Mahrez, after Roma had a £32m bid for the 26-year-old turned down. The Foxes want £50m for the Algeria winger. (Mirror)

Paris St-Germain are ready to offer £80m for Chile forward Alexis Sanchez, 28, as they try to beat Manchester City for the Arsenal star. (Independent)

Chelsea and Manchester United have received encouragement to pursue a deal to sign Serge Aurier after PSG decided to put the 24-year-old Ivory Coast right-back up for sale. (Telegraph)

Southampton are prepared to let Virgil van Dijk, 26, 'rot in the stands' than sell the Dutch defender. (Express)

Negotiations between Everton and Swansea over a deal for Iceland midfielder Gylfi Sigurdsson, 27, have broken down but any suggestion the deal is completely off is nonsense. (Sky Sports)

Brighton are prepared to break their transfer record again this summer to bring in a striker, having paid PSV Eindhoven £10m for midfielder Davy Propper, 25. (Brighton Argus)

Liverpool are set to turn down a request from Hannover to take 17-year-old forward Ben Woodburn on loan. (Mail)

Birmingham have rejected a £3m bid from Derby for striker Che Adams with Blues boss Harry Redknapp keen to hang on to the 21-year-old. (Birmingham Mail)

Marseille are hoping to finalise a deal to sign defender Jordan Amavi, 23, from Aston Villa before the end of the week. (L'Equipe - in French)

Newcastle manager Rafael Benitez has been told to offload players before he considers adding to his £30m summer spending. (Times) 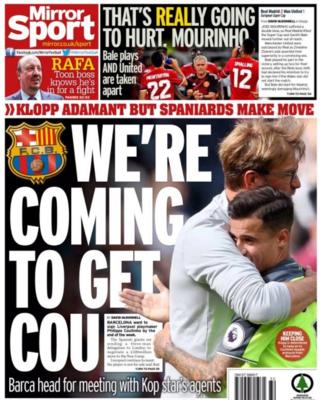 Barcelona's pursuit of Coutinho is the Mirror's top story

Marouane Fellaini saw the funny side of a perfectly timed photo taken during Tuesday night's Uefa Super Cup defeat by Real Madrid as he posted this reply to fans on social media. (@Fellaini) 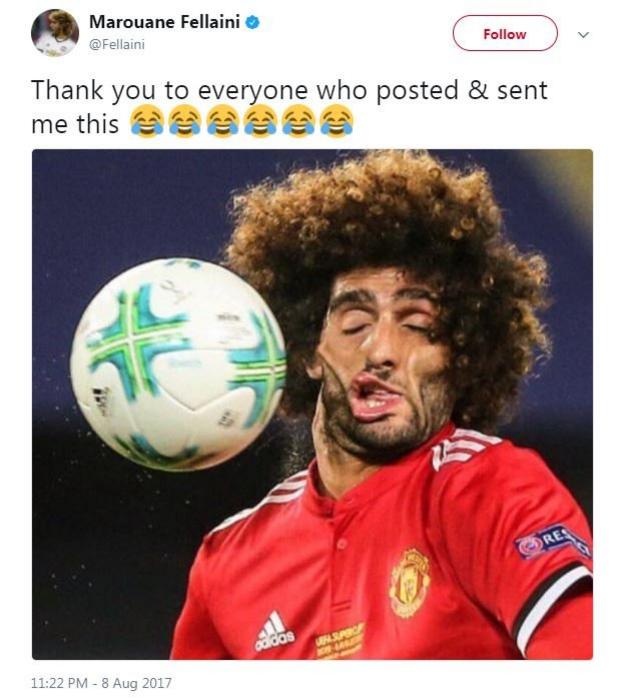 Watford midfielder Valon Behrami has unveiled a tattoo on his leg that gives an insight into his troubled upbringing in war-torn Kosovo. (Daily Mail)

A Manchester United fan at the Super Cup has gone on a rant about his "horror show hotel" in Skopje. (Manchester Evening News)

Cristiano Ronaldo escaped a nasty fall after slipping on a towel as he stepped off the Real Madrid team bus. (Telegraph)

Barcelona are "a matter of hours" away from signing playmaker Philippe Coutinho, 25, from Liverpool after their representatives travelled to Liverpool on Tuesday to conclude the deal. (Sport via Metro)

Portugal midfielder Andre Gomes could join the Reds as part of the Coutinho deal. (Mundo Deportivo via Sun)

Chelsea are hoping for up to four more arrivals before the end of the transfer window, with Leicester City midfielder Danny Drinkwater, 27, high up on Antonio Conte's list. (Standard)

Crystal Palace chairman Steve Parish has denied the club is on the verge of being sold to a consortium led by former Arsenal defender Tony Adams. (Mirror)

Tottenham's £30m midfielder Moussa Sissoko is "keen on joining" Turkish club Trabzonspor but Spurs will only sanction a permanent deal rather than loan. (Mirror)