Barcelona are "a matter of hours" away from signing playmaker Philippe Coutinho, 25, from Liverpool after their representatives travelled to Liverpool on Tuesday to conclude the deal. (Sport via Metro)

Portugal midfielder Andre Gomes could join the Reds as part of the Coutinho deal. (Mundo Deportivo via Sun)

Chelsea are hoping for up to four more arrivals before the end of the transfer window, with Leicester City midfielder Danny Drinkwater, 27, high up on Antonio Conte's list. (Standard)

Crystal Palace chairman Steve Parish has denied the club is on the verge of being sold to a consortium led by former Arsenal defender Tony Adams. (Mirror)

Tottenham's £30m midfielder Moussa Sissoko is "keen on joining" Turkish club Trabzonspor but Spurs will only sanction a permanent deal rather than loan. (Mirror)

Liverpool will not be able to hold on to 25-year-old Coutinho this summer, says club legend Graeme Souness. (Sky Sports)

Madrid boss Zidane has dismissed speculation over a possible move back to the Premier League for Bale.(Mirror)

25 years of the Premier League in numbers

Liverpool are set to resurrect their £60m move for Virgil van Dijk after the Southampton defender, 26, handed in a transfer request. (Daily Star)

Chelsea are also interested in Van Dijk, with the Blues hoping poor relations between Liverpool and Southampton will work in their favour. (Telegraph)

Arsenal should have signed Van Dijk as well as midfielder Nemanja Matic, who moved from Chelsea to Manchester United for £40m, because the club lacks leadership on the pitch, according to former Gunners striker Ian Wright. (BBC Radio 5 live)

Leicester City are set to announce the signing of Coventry City's Leicester-born forward George Thomas, 20, for £450,000 plus add-ons. (Coventry Telegraph)

Our second in five five-yearly reviews of the Premier League 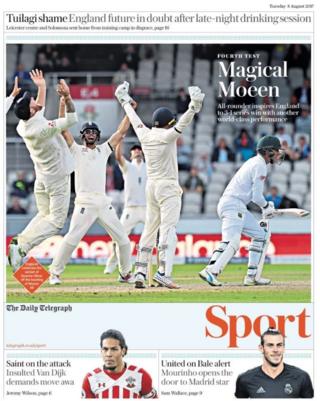 The Telegraph leads on England's cricket success, but also has the transfer stories involving Virgil van Dijk and Gareth Bale

Theo Walcott says Arsenal's new signing Sead Kolasinac is "an absolute animal" and believes the defender could become one of the best in the Premier League. (Guardian)

Chelsea striker Michy Batshuayi has denied suggestions he laughed at team-mate Alvaro Morata, who missed a spot-kick, during the Blues' penalty shootout defeat by Arsenal in the Community Shield. (Daily Mail)

Former Arsenal and England defender Tony Adams is leading a consortium which has struck an agreement to buy Crystal Palace for £200m. (Daily Star)

Liverpool are making a mistake refusing to bring French defender Mamadou Sakho, 27, back into the first-team squad - according to former midfielder Momo Sissoko. (Liverpool Echo)

Leicester City's former Manchester United midfielder Matty James, 26, is set to play for the Foxes for the first time in 825 days. (Leicester Mercury)

Manchester United boss Jose Mourinho will argue against a pre-season tour of China proposed for next year as he would prefer to return to the United States. (Sun)

Tottenham fear right-back Kieran Trippier, 26, will miss the start of the season because of the ankle injury he suffered in a friendly against Juventus. (Telegraph)

Liverpool attacking midfielder Philippe Coutinho, 25, would like to move to Barcelona if a deal can be done amicably with his club. (Sky Sports)

Barcelona will face competition from Paris St-Germain for the Brazil international's signature with the Ligue 1 club ready to bid £100m for the player. (Le Parisien - in French)

Manchester United have had a £36m bid for Barcelona's Sergi Roberto rejected and Chelsea could soon join the race for the 25-year-old right-back. (Mail)

Chile forward Alexis Sanchez, 28, is ready to accept Arsenal's refusal to sell him and will see out the final year of his contract before leaving on a free transfer next year. (Mirror)