Liverpool attacking midfielder Philippe Coutinho, 25, would like to move to Barcelona if a deal can be done amicably with his club. (Sky Sports)

Barcelona will face competition from Paris St-Germain for the Brazil international's signature with the Ligue 1 club ready to bid £100m for the player. (Le Parisien - in French)

Manchester United have had a £36m bid for Barcelona's Sergi Roberto rejected and Chelsea could soon join the race for the 25-year-old right-back. (Mail)

Barcelona will offer Liverpool £120m for Coutinho following the sale of his compatriot Neymar, 25, to PSG. (Star)

Despite Liverpool boss Jurgen Klopp saying Coutinho will not be sold, Barcelona are increasingly confident of finalising a deal this week - potentially for £90m. (Sun)

Barcelona could also use some of the funds from Neymar's sale to target PSG and Germany attacking midfielder Julian Draxler, 23, whose agent has been spotted in Barcelona. (Bild - in German)

News app users should select this link to vote

Liverpool manager Klopp is prepared to give up his pursuit of Southampton and Netherlands defender Virgil van Dijk, 26, and put his trust in his current centre-backs. (Mirror)

Arsenal manager Arsene Wenger says more players will be leaving the Gunners before the end of the transfer window, because the squad is too big. (Telegraph)

Chile forward Alexis Sanchez, 28, is ready to accept Arsenal's refusal to sell him and will see out the final year of his contract before leaving on a free transfer next year. (Mirror)

Barcelona have agreed a contract with 20-year-old Borussia Dortmund and France forward Ousmane Dembele but now have to agree a fee with the German club, whose asking price will be close to 100m euros (£90.2m). (L'Equipe - in French)

Barcelona are also in advanced talks to sign Brazil and former Tottenham midfielder Paulinho, 29, from Chinese side Guangzhou Evergrande. (Sport - in Spanish)

Chelsea are ready to challenge Manchester United for the signature of Real Madrid and Wales forward Gareth Bale, 28, who will cost about £90m. (Express)

Chelsea, Manchester United and Monaco are all interested in a move for 25-year-old Barcelona full-back Sergi Roberto, who could be available for 40m euros (£36.1m). (Don Balon - in Spanish)

AC Milan sporting director Massimo Mirabelli has not ruled out the prospect of 35-year-old striker Zlatan Ibrahimovic, who is out injured and a free agent after his contract with Manchester United expired, returning. (Sun)

Manchester City midfielder David Silva, 31, has started negotiating a move to Spanish side Las Palmas in his native Gran Canaria, but only for when his contract at Etihad Stadium expires in 2019. (Elgoldigital, via AS)

Premier League debutants Brighton are closing in on a £3.5m deal for PSV Eindhoven and Netherlands midfielder Davy Propper, 25. (Mail)

Stoke have agreed a three-year deal for Cameroon forward Jean-Eric Maxim Choupo-Moting, 28, who is out of contract at German side Schalke and will join on a free transfer. (Mail)

Leicester City have rejected a third bid - this time of about 35m euros (£31.6m) - from Roma for Algeria winger Riyad Mahrez, 26. (Sky Sport Italia, via Talksport)

Crystal Palace and Everton are interested in a permanent deal for 20-year-old Newcastle keeper Freddie Woodman, who is expected to go out on loan this season. (Chronicle)

Gabon striker Pierre-Emerick Aubameyang, 28, says he held talks with the Borussia Dortmund board about leaving this summer but is now happy to stay at the Bundesliga side. (Welt - in German)

Sunderland insist they have got a higher fee for 29-year-old midfielder Jeremain Lens from Besiktas than the £4m reported by Turkish media. (Chronicle) 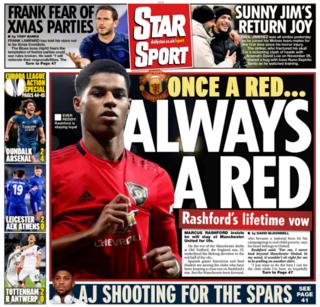 Friday's back pages: Star Sport: 'Once a red, always a red'

Neymar's former club Santos are seeking a percentage of the Paris St-Germain forward's world record 222m euros (£200m) transfer fee from Barcelona because the Spanish side failed to honour one of the two friendlies stipulated in their deal to sign the Brazilian in 2013. (Marca)

PSG fans have mocked Barcelona defender Gerard Pique by getting the phrase 'se queada' - Spanish for 'he stays' - printed on the back of their shirts, in reference to the photo the Spaniard posted on Twitter with Neymar, prior to the Brazilian's transfer. (Telegraph)

Barcelona are preparing to make a bid for England and Tottenham midfielder Dele Alli, 21, after selling Neymar for £200m. (Sunday Express)

Alli's Spurs team-mate Eric Dier, 23, has attracted interest from Bayern Munich and the Bundesliga champions are ready to make a £50m offer for the England midfielder. (Sun on Sunday)

Everton will move for Arsenal striker Danny Welbeck, 26, if they cannot persuade his French team-mate Olivier Giroud, 30, to leave the Emirates. (Sunday People)

Real Madrid have assured Wales midfielder Gareth Bale, 28, he is "the future of the club", in a move that will disappoint Manchester United.(Observer)