Barcelona are preparing to make a bid for England and Tottenham midfielder Dele Alli, 21, after selling Neymar for £200m. (Sunday Express)

Alli's Spurs team-mate Eric Dier, 23, has attracted interest from Bayern Munich and the Bundesliga champions are ready to make a £50m offer for the England midfielder. (Sun on Sunday)

Everton will move for Arsenal striker Danny Welbeck, 26, if they cannot persuade his French team-mate Olivier Giroud, 30, to leave the Emirates. (Sunday People)

Real Madrid have assured Wales midfielder Gareth Bale, 28, he is "the future of the club", in a move that will disappoint Manchester United. (Observer)

But Juventus manager Massimiliano Allegri has told Chelsea they have "no chance" of signing Brazilian left-back Alex Sandro, 26. (ESPN FC)

Liverpool have been dealt a huge blow in their pursuit of 27-year-old Rennes midfielder Benjamin Andre. (Sunday Express)

A mystery ­Chinese buyer has expressed an ­interest in buying out some of Manchester United's shareholders. (Sunday Times - subscription required)

Stoke City are closing in on Cameroon forward Eric Maxim Choupo-Moting, 28, who is a free agent after leaving German club Schalke. (Sentinel)

Premier League newcomers Brighton want a forward and a goalkeeper before the transfer window closes. (The Argus)

Aston Villa's French defender Jordan Amavi, 25, is wanted by Marseille on loan with a view to a permanent move. (Birmingham Mail)

Bolton manager Phil Parkinson is close to signing a new contract with the Championship club. Parkinson, 49, has been in charge since June 2016.(Bolton News)

Southampton manager Mauricio Pellegrino has played down suggestions that Saints are about to complete a £16m deal for Juventus midfielder Mario Lemina, 23. (Daily Echo) 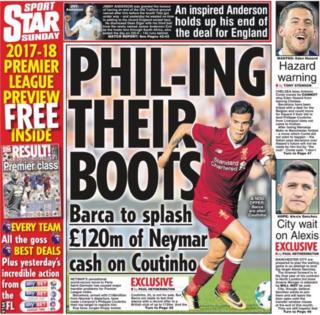 Neymar's father has revealed the "attitude of the board" at Barcelona lost his support and he wanted his son to complete a move to Paris St-Germain. (Sunday Mirror)

But the Brazilian may not have been entirely honest about when he chose to leave the La Liga side for France according to fellow countryman Dani Alves. (Metro)

Leroy Sane to sign for Monaco? Or Kylian Mbappe to Manchester City? 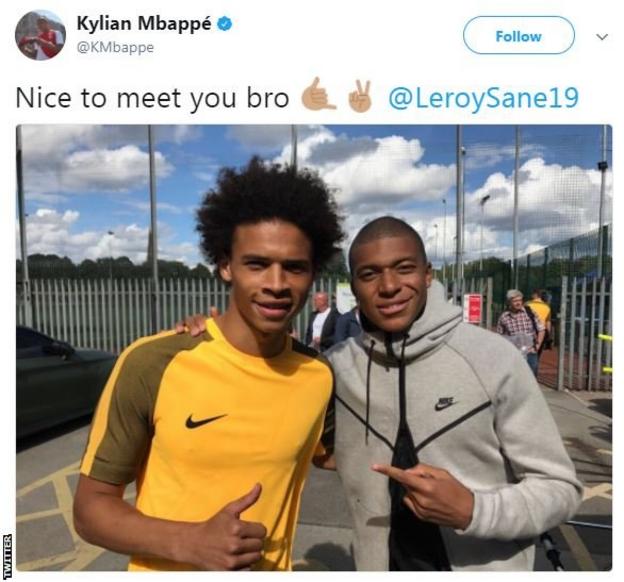 Whatever it means, the tweet has got City right-back Benjamin Mendy teasing his own fans.... 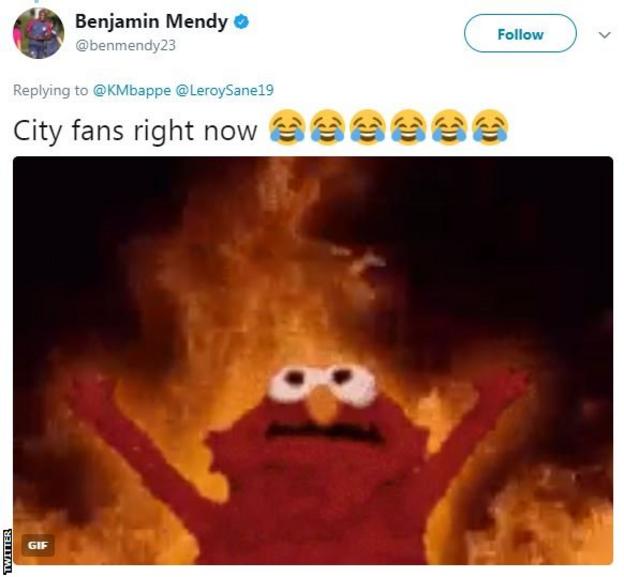 And after England suffered semi-final heartache against the Netherlands in the Women's Euros semi-finals, defender Laura Bassett has now lost her luggage...

Monaco manager Leonardo Jardim has hinted that 18-year-old striker Kylian Mbappe - targeted by a number of clubs including Real Madrid, Manchester United, Barcelona and Arsenal - could leave before the close of the transfer window for a big enough offer. (Independent)

Philippe Coutinho has been left out of Liverpool's squad for Saturday's friendly against Athletic Bilbao because of a back injury. The 25-year-old midfielder is wanted by Barcelona as a replacement for Neymar, who has joined Paris St-Germain. (Daily Mirror)

Barcelona have wasted no time in finding a replacement for Neymar after making contact with Borussia Dortmund over French forward Ousmane Dembele, 20. (Daily Mail)

Dembele says he welcomes the transfer speculation linking him with the club at the moment. (Metro)