Monaco's 18-year-old forward Kylian Mbappe has decided to leave the club, with Real Madrid, Manchester City and Paris St-Germain in the race to sign him. (L'Equipe - in French)

Barcelona have already made contact with Monaco over a move for the highly rated French forward. (Le10Sport - in French)

The Spanish league will not accept PSG's payment of Neymar's release clause with Barcelona because of the 25-year-old forward's loyalty payment dispute with Barca, and concerns over PSG breaking Uefa's Financial Fair Play rules. (Sport)

European governing body Uefa will ask PSG to explain how they intend to finance the transfer. (Daily Telegraph)

Barca will not try to sign Atletico Madrid's 26-year-old forward Antoine Griezmann despite Neymar's impending departure. (AS - in Spanish)

Borussia Dortmund have rejected a bid from Arsenal for Dembele.(Mundo Deportivo - in Spanish)

Neymar's former representative Wagner Ribeiro says: "PSG will pay the release clause and Neymar will be presented in Paris this week."(Marca)

The Brazilian passed his medical with PSG on Wednesday in Portugal.(L'Equipe - in French)

Barcelona will use the money from Neymar's sale to fund moves for Chelsea attacking midfielder Eden Hazard, 26, and Liverpool forward Philippe Coutinho, 25. (Sun)

The Catalan club will bid £100m for Coutinho, but Reds boss Jurgen Klopp says the playmaker will not be leaving Liverpool. (Daily Mail)

Atletico Madrid boss Diego Simeone has told his club's board that they must sign striker Diego Costa, 28, who Chelsea value at £50m.(Evening Standard)

Chelsea are in no hurry to sell Costa and are determined to hold out for their asking price.(Daily Star)

Everton's £50m deal to sign Swansea attacking midfielder Gylfi Sigurdsson, 27, is likely to be completed over the next few days. (Guardian)

Defender and Liverpool target Virgil van Dijk, 26, is close to forcing through his departure from Southampton. (Daily Mirror)

Arsenal midfielder Jack Wilshere, 25, wants to stay and fight for a place at the club, despite interest from Italian side Sampdoria. (Daily Telegraph)

Leicester forward Demarai Gray, 21, is happy to stay at the club after talks over his future.(Leicester Mercury)

Winger Stewart Downing, 33, is training with Middlesbrough's under-23 side after his transfer to Birmingham stalled. (Evening Gazette)

Sunderland are hopeful of signing Aston Villa's 30-year-old forward Ross McCormack on loan before the start of the Championship season.(Team Talk)

Manchester United manager Jose Mourinho says he will be "happier" if the Red Devils can secure a fourth signing of the transfer window. (Daily Express)

Mourinho says France forward Anthony Martial, 21, will not be leaving Manchester United this summer, despite being linked with a move to Inter Milan.(Daily Star) 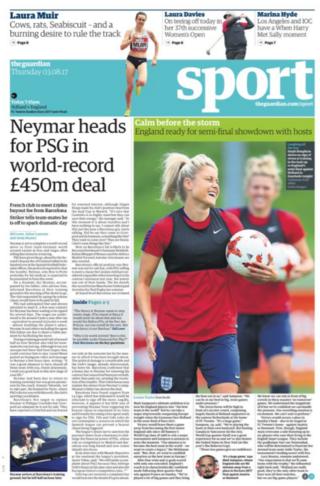 Barcelona have already removed Neymar's image from posters around their stadium. (Marca)

Zlatan Ibrahimovic says he has "taken over the zea", as he posed for a picture on a yacht. (Instagram)

Tottenham's Harry Kane took time to pose in front of the green screen. We look forward to seeing the out-takes... 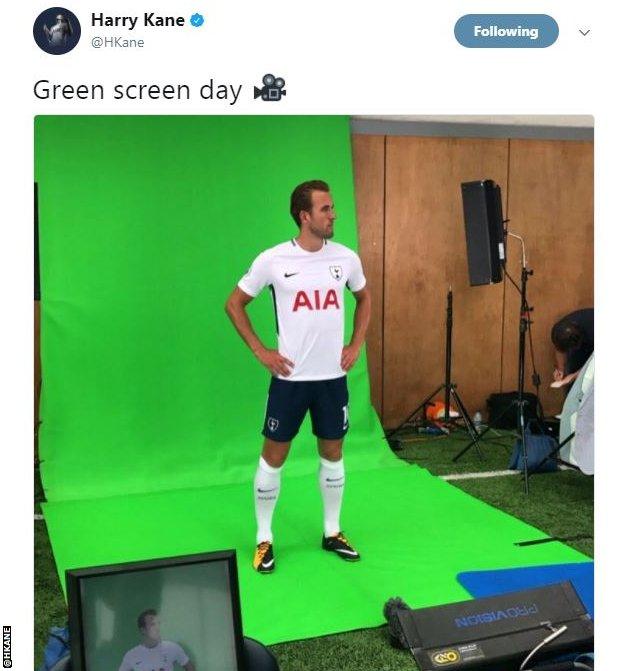 Tottenham manager Mauricio Pochettino has revealed he spoke to Chelsea striker Alvaro Morata about joining Tottenham but the 24-year-old did not want to compete with Harry Kane. (Daily Mail)

Arsene Wenger has told Arsenal striker Alexis Sanchez, 28, he will not be sold to another English club this summer. (Times - subscription required)

United have also made an enquiry about Anderlecht midfielder Leander Dendoncker, but are not expected to sign the 22-year-old this summer. (Manchester Evening News)

Liverpool are not interested in Barcelona midfielders Rafinha or Andre Gomes, both 24, who have been mentioned as part of a possible swap deal for Philippe Coutinho. (Liverpool Echo)