Barcelona forward Neymar sent Whatsapp messages to Liverpool midfielder Philippe Coutinho, 25, in a bid to persuade his fellow Brazilian to join him in a move to Paris St-Germain. (Sport.es)

Midfielder Nemanja Matic, 28, has completed a medical as he looks set to complete a £40m move from Chelsea to Manchester United. (Manchester Evening News)

Watford manager Marco Silva has stressed the need for more signings before his side's opening fixture of the new season. (Hertfordshire Mercury)

The Hornets have stepped up their chase for 27-year-old Arsenal full-back Kieran Gibbs, after West Brom withdrew their interest in the England defender. (Watford Observer)

American businessman Michael Eisner will complete his purchase of Portsmouth before the start of the EFL season. (Sky Sports)

Tottenham are "a little bit behind" other clubs in making signings this summer but are "working hard" to bring players in, says manager Mauricio Pochettino. (Evening Standard)

Everton midfielder Ross Barkley will have to lower his wage demands to join Tottenham, who are not willing to pay the £120,000-a-week wages the 23-year-old England international turned down at Goodison Park. (Daily Mirror)

The Toffees are also prepared to hold out for a fee of £35m for Barkley, despite him having less than 12 months on his contract. (Daily Mail)

Barcelona will make a £53m move for Arsenal playmaker Mesut Ozil, 28, if they are unable to sign Philippe Coutinho, 25, from Liverpool. (Don Balon, via Express)

La Liga will report Paris St-Germain for a breach of Uefa's financial fair play rules over the signing of Neymar from Barcelona, even if the French side do not pay the 25-year-old Brazil forward's 220m euros (£197m) buyout clause. (El Larguero, via AS)

PSG are so confident of signing Neymar they are already planning how to unveil him. (ESPN)

Chelsea are willing to meet Bayern Munich's demands to sign midfielder Renato Sanches, 19, on loan for the season.(Corriere dello Sport, via Star)

However, new Barca boss Ernesto Valverde is keen to give Vermaelen more playing time this season, after being impressed by the Belgian in pre-season. (AS)

Leicester and Algeria winger Riyad Mahrez, 26, is hoping Italian side Roma return with a third bid after offers of £20m and £32m were rejected by the Foxes. (Daily Mirror)

Arsenal boss Arsene Wenger says players such as Sanchez and Ozil staying, despite entering the final 12 months of their contracts, is an "ideal" situation because everyone "has to perform". (Sun)

Watford are keen to sign Arsenal left-back Kieran Gibbs, but the 27-year-old would have to take a significant pay cut to join the Hornets. (Sky Sports)

French left-back Massadio Haidara, 24, is the latest Newcastle player to be told to find a new club, and is in talks to join Ligue 1 side Saint-Etienne. (Chronicle)

Guardiola also says midfielder Samir Nasri has no future at the club, even though he has praised the 30-year-old's pre-season displays. (Star)

Elsewhere, Guardiola is on course for a row with City's board over plans for a pre-season tour in China next summer, with the Spaniard preferring to return to the United States. (Daily Express)

Manchester United boss Jose Mourinho no longer intends to loan out 21-year-old midfielder Andreas Pereira, after being impressed by the Brazilian during pre-season. (Sun)

Liverpool midfielder Adam Lallana, 29, says it "would be like having two new signings" if Reds striker Daniel Sturridge, 27, can stay fit and "firing on all cylinders". (Daily Telegraph) 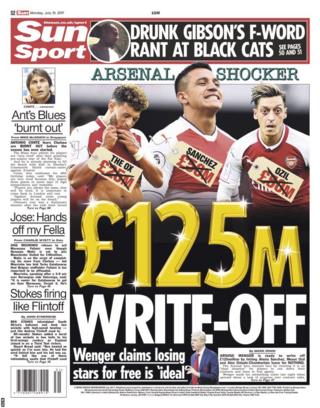 Liverpool boss Jurgen Klopp has joked he is returning with a 300m euros (£260m) offer for Naby Keita after the 22-year-old midfielder's club RB Leipzig rejected a third bid from the Reds. (Sky Deutschland, via Independent)

Lionel Messi wanted to join Manchester City last summer because the Argentina striker, 30, felt trapped at Barcelona, according to a new documentary. (Sun)

Neymar's father asked Paris St-Germain to delay formal negotiations with Barcelona over a £450m deal for his son until after 31 July - the day he earns a £23.3m commission for his part in persuading the 25-year-old forward to sign a new contract last October. (Sunday Times - subscription required)

If Brazil international Neymar does leave to join PSG, Barcelona could target Atletico Madrid and France striker Antoine Griezmann, 26, as his replacement. (Marca)

Once a deal is done for Neymar, PSG will then lodge a £35m bid to sign 28-year-old striker Alexis Sanchez from Arsenal. (Sunday Express)

But Chile forward Sanchez is also ready to submit a transfer request to force through a move to Manchester City. (Sunday Mirror)