Barcelona and Brazil forward Neymar, 25, has agreed a five-year contract with Paris St-Germain and could complete a 220m euros (£197m) move to the French side next week. (RMC, via Metro)

PSG will offer former Manchester United winger Angel di Maria, 29, as part of the deal to reduce the taxes they will have to pay by triggering Neymar's buyout clause. (AS)

But Barcelona fear Liverpool will price them out of a deal for Coutinho. (AS)

Barcelona midfielder Andres Iniesta, 33, says only Neymar can clarify his future and added "I do not think 200-300 million [euros] will be more beneficial for Barcelona than having Neymar". (Marca)

Monaco are adamant they will not sell Thomas Lemar, despite Arsenal making their third bid - of about £45m - for the 21-year-old France midfielder. (Telegraph)

Manchester City will offer Arsenal forward Alexis Sanchez, 28, a deal worth £320,000 a week to join them this summer. (Mail)

Sanchez can expect to be welcomed with "open arms" if he joins City, says Chile team-mate and Manchester City keeper Claudio Bravo. (24 Horas, via Metro)

Southampton are determined to keep centre-back Virgil van Dijk, 26, and reintegrate him into the first-team squad, despite the Dutchman being left out of a training camp in France this week. (Telegraph)

Liverpool have ended their pursuit of RB Leipzig midfielder Naby Keita, 22, but may return next summer, when it is believed Keita can move for £48m.(Liverpool Echo)

Etienne Capoue's future at Watford is in doubt after the 29-year-old French midfielder was involved in a row with boss Marco Silva following a pre-season friendly defeat by Rangers. (Mail)

Striker Troy Deeney could follow Capoue in leaving the Hornets after Silva refused to confirm the 29-year-old will continue as captain. (Sun)

Arsenal are interested in signing 21-year-old midfielder Jakub Jankto from Udinese, according to the Czech international's agent. (Sportitalia, via Express)

Chelsea would have to offer about £17.9m if they want to sign Inter Milan midfielder Antonio Candreva, 30, in a move which could allow the Italian club keep hold of Perisic. (Daily Star)

Wales international Bale will resist any attempts by Real Madrid to sell him to Manchester United as he has no plans to leave the Spanish club. (Times - subscription required)

Inter manager Luciano Spalletti considers a deal for Perisic to be off after a lack of discussions between Man Utd and Inter in recent weeks. (Premium Sport, via Star)

Everton will look to sign 26-year-old Nice midfielder Jean Seri, believed to be a target for Arsenal, if the Toffees cannot agree a fee for Swansea midfielder Gylfi Sigurdsson, 27. (L'Equipe, via Sun)

Newcastle United have been linked with a move for Udinese goalkeeper Orestis Karnezis, 32. (Tutto Udinese, via Chronicle)

Brazilian Gabriel Martinelli, 16, is on trial at Manchester United as he looks to seal a permanent move from Ituano. (Manchester Evening News) 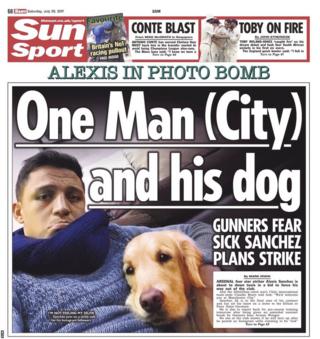 Tottenham's players took part in an after-dinner sing-song during which players sang the names of Mousa Dembele and manager Mauricio Pochettino. (Instagram)

Chelsea boss Antonio Conte claims he loses up to 3kg every match because of his frenzied movement on the touchline. (Telegraph)

New signing Alvaro Morata impressed his Chelsea team-mates in training by scoring a goal from a remarkable angle. (Daily Star)

Manchester City striker Sergio Aguero swapped one type of football for another as he tried out the American version with NFL side Houston Texans. (Instagram)

Barcelona forward Neymar, who has been heavily linked with a 220m euro (£197m) move to Paris-St Germain, was involved in a training ground clash with team-mate Nelson Semedo on their pre-season tour. (Daily Star)

Real Madrid coach Zinedine Zidane has said he cannot guarantee that Wales forward Gareth Bale, 28 - who is a target for Manchester United - will stay at the Bernabeu this summer. (Daily Mirror)

Read more on Dismal West Ham knocked out by Baggies