Arsenal forward Alexis Sanchez has revealed he is struggling with illness before his return to training with the Gunners this weekend. (Metro)

Barcelona have cancelled a promotional event in China because forward Neymar, 25, is instead "busy dealing with his transfer". (Express)

Brazil international Neymar, who has been heavily linked with a £199m move to Paris-St Germain, was also involved in a training ground clash with team-mate Nelson Semedo on their pre-season tour. (Star)

Arsenal are closing in on a £45m deal for Monaco's 21-year-old France midfielder Thomas Lemar. (Sun)

Real Madrid coach Zinedine Zidane has said he cannot guarantee that Wales forward Gareth Bale, 28 - who is a target for Manchester United - will stay at the Bernabeu this summer.(Mirror)

Tottenham boss Mauricio Pochettino wants to sign Barkley this summer to convert him into a central midfielder.(Times - subscription required)

Liverpool are ready to make a final attempt to sign RB Leipzig's Guinea midfielder Naby Keita, with a bid in excess of £70m likely for the 22-year-old.(Mirror)

Meanwhile, the Reds remain unmoved in their stance that Brazil forward Philippe Coutinho, 25, is not for sale amid interest from Barcelona.(ESPN)

Inter Milan boss Luciano Spalletti says he wants 28-year-old Croatia winger Ivan Perisic - a Manchester United target - to stay at the club, but that he "can't say for sure" what will happen. (ESPN)

AC Milan chairman Marco Fassone has revealed the club have spoken to the agent of Chelsea and Spain striker Diego Costa, 28. (Sky Sports)

Striker Karim Benzema, 29, is expected to re-sign with Real Madrid for the upcoming season, regardless of whether the club sign his 18-year-old France team-mate Kylian Mbappe from Monaco.(Marca)

Argentina forward Paulo Dybala, 23 - a target for Manchester United and Barcelona - has no plans to leave Juventus this summer.(Talksport)

Former Arsenal and Liverpool winger Jermaine Pennant, 34, is set to sign for Billericay Town despite interest from Scottish Premiership side Hibernian. (Sun)

Brighton are ready to break their transfer record again with an £8m move for Leicester forward Tom Lawrence, 23.(Mirror) 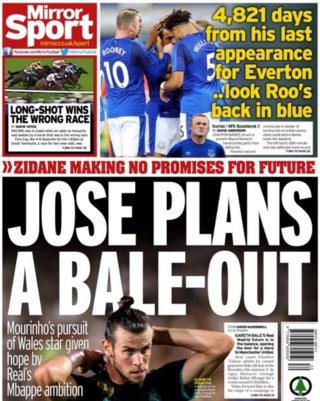 Liverpool have been cooling down after training by having a dip in an ice-cold lake in Germany, but striker Daniel Sturridge was not very keen. (Liverpool Echo)

Arsenal midfielder Mesut Ozil is spending time in an ice chamber as he prepares for the new season. He posted a picture on Instagram and joked: "They said, 'Mesut you have to be ice-cold in front of goal'. Ok, I'll try my best ...".(Instagram)

Chelsea's players were put through their paces by a Shaolin monk. (Chelsea Youtube)

Barcelona hosted former US president Barack Obama as they beat Manchester United in a friendly in the United States. (Twitter)

Chelsea failed in a late bid to buy Kyle Walker, 27, from Tottenham. The England right-back moved to Manchester City for an initial £45m. (London Evening Standard)