United are willing to offer the Ligue 1 side 70m euros (£58.6m) for the Brazil international. (Goal)

Manchester United are hopeful of signing midfielder Eric Dier from Tottenham, who could be persuaded to sell the 23-year-old if they can bring in Burnley centre-back Michael Keane, 24. (Sunday Telegraph)

Keane is not planning to make a decision on his future until the end of the season, with Everton, Liverpool, ex-club Manchester United and Tottenham interested in him. (Sunday Times - subscription required)

The Toffees are set to offer Sunderland keeper Jordan Pickford £90,000-a-week in order to beat Arsenal and Manchester City to the 23-year-old's signature.(Sunday Express)

Real Madrid will drop their interest in Chelsea winger Eden Hazard, 26, in order to give 21-year-old midfielder Marco Asensio a chance to develop.(Marca - in Spanish)

Manchester United forward Zlatan Ibrahimovic, 35, will visit one of the world's top knee specialists in America to try to rescue his career following a ruptured cruciate.(Mail on Sunday)

United target Andrea Belotti will be allowed to leave Torino if the right offer comes in for the 23-year-old forward, says boss Sinisa Mihajlovic.(Manchester Evening News) 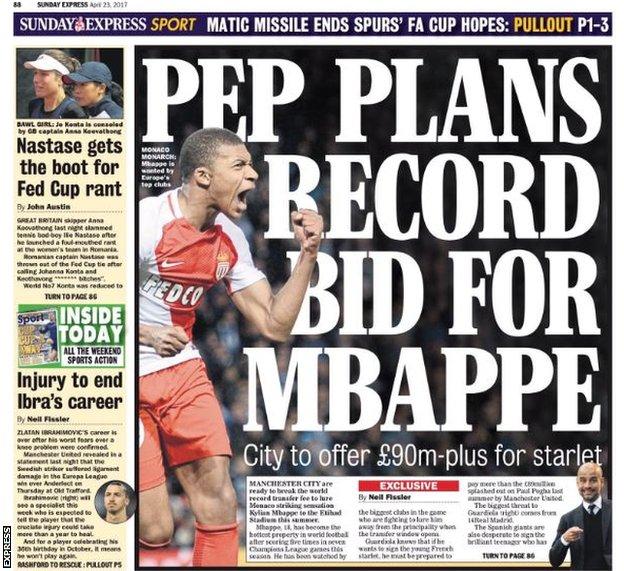 Chelsea and Manchester United are keen on Monaco midfielder Bernardo Silva, but the 22-year-old's agent is in talks with Real Madrid.(Don Balon - in Spanish)

Liverpool target Lorenzo Insigne has signed a new deal with Napoli. The 25-year-old forward has scored 14 league goals this season.(Goal)

Chelsea players were delighted with their 4-2 victory over Tottenham in the FA Cup semi-final.

Marc Pugh made his 250th appearance for Bournemouth in the 4-0 win over Middlesbrough and celebrated with a goal.

Bojan Krkic, on loan from Stoke, scored for Mainz against Bayern Munich on Saturday to complete this goalscoring feat...

Tony Adams' moves in his first training session as coach of Granada got everyone talking, and the former Arsenal defender has been at it again on the touchline.(Sunday Telegraph)

Manchester United goalkeeper David de Gea has put his house up for sale for £3.85m - and it comes complete with a glass trophy cabinet. (Sun on Sunday)