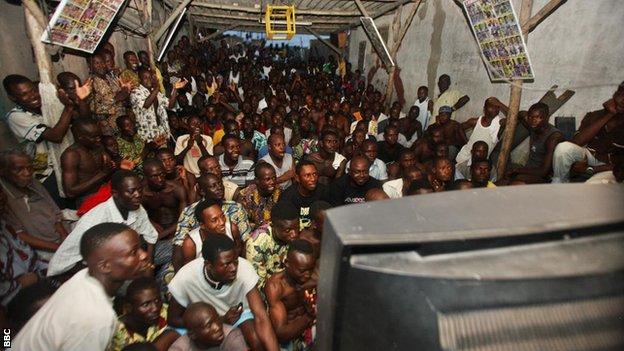 Another mammoth sporting weekend is here.

Here's some things you'll only understand if sport rules your life...

Never mind 3pm, tea-time is the perfect time for an FA Cup semi-final

Whether you've binged on sport all day long, or you've been forced to be out and about and been glued to your phone, a tea-time FA Cup semi-final at Wembley is THE perfect end-of-day, before you go out pick-me-up.

And they kick off with Chelsea with Tottenham - on the Beeb (THE home of the FA Cup). Cue Match of the Day music and montages of Dele Alli, Harry Kane, Diego Costa and Eden Hazard (67 goals between them this season!).

Yes, some people love a 3pm kick-off, but if you can't be there, you want it on the telly at a time that suits you - and that's tea-time, slap bang in Celebrity Pointless land.

Read: Coverage times from the best of this week's sport action on the BBC

You wish people would only talk to you at half-time or full-time - or even better, Monday

There's nothing worse, is there? You've prepped for the game, got comfy, found that packet of hidden biscuits, and your girlfriend, boyfriend, mum or dad* (delete as appropriate) chooses that very moment to tell you about their week or their day, in the most minute of details. Listen, it's simple, I DON'T CARE. I'm not bothered about your feelings right now.

I'm not bothered about your job. Just LEAVE ME ALONE. The best sport to watch if you do have to smile, and nod and pretend to listen? The snooker - there's barely any commentary, and it's slow, so there's plenty of time to look away and smile, while you listen and watch. Even better, it's on the telly and your phone. All weekend.

Watching sports you know absolutely nothing about is better than any chore, ever

OK, so you don't know much about gymnastics - other than you vaguely remember that Amy girl missed her exams for the Olympics and you've heard of Simone Biles (who's got her own move) - but you know that landing on two feet after some whizzy routine in mid-air is bloody good. Great in fact.

Get it on. Beats cleaning up after last night's takeaway or tackling cleaning your room. Your pile of mucky pants can wait. Simone Biles isn't in action (she's American and this is the Euros #geography). It's red button and online across lunchtime Saturday and Sunday.

You've seen Wimbledon for at least 35 minutes for the last three years - and it's on again soon, so spare some time to gen up.

You need to know about more than Andy Murray, so here's your chance to get to know Britain's best female players.

Laura Robson was junior Wimbledon champion in 2008 but injuries have been a real pain for her since. Literally. Remember, you watch Wimbledon, so you can do this...

You could do it yourself if you really tried, but you really can't be bothered

Every year when you watch the London Marathon, you're tempted to dig out your old trainers and at least run to the shop - especially when you run out of biscuits. How hard can it really be to run, without stopping, for five hours?

You were pretty nifty at the 400m in the last year at school. Be warned like, the record is about two hours - that's literally two episodes of Game of Thrones.

This year's sweat-a-thon, including Batman (probably), starts on Sunday morning at 9am. And if you're only just awake, stick your headphones in, get on the wi-fi and watch it under the duvet on your phone.

And there are bags more sports besides on the BBC this weekend. All of the details and the timings and whatnot, are here.