Drug use at every level of sport is "fast becoming a crisis" according to UK Anti-Doping - responding to a BBC poll into doping in amateur sport.

It found more than a third (35%) of amateur sports people say they personally know someone who has doped, and 8% said they had taken steroids.

Half believe performance enhancing substance use is "widespread" among those who play sport competitively.

What do the statistics say?

According to figures from UK Anti-Doping (Ukad), the national body responsible for protecting clean sport, there are currently 52 athletes and coaches serving bans.

Of these, only 12% are professional sports men or women; 62% are amateurs, 21% are semi-professional, and 5% are coaches.

Of the 186 sanctions handed out across 22 separate sports by Ukad since it formed in 2009, 46% have been rugby union or league players - mainly at amateur and semi-professional levels.

What does the poll tell us?

Reacting to the ComRes poll for BBC Sport of more than 1,000 men and women who are members of sports clubs and teams, Sapstead said: "Certainly the figures as regards the prevalence of performance-enhancing substances at an amateur level are incredibly alarming.

"That said, it does confirm what UK Anti-Doping has long suspected and also seen through some of our intelligence-led testing.

"I don't think any sport can say that they don't have a problem at an amateur level.

"I think now is the time for everybody to sit up and acknowledge that this is a reality in every single sport and that you can't just be washing your hands of it or hoping that someone else will address it."

Why do amateurs dope?

Of the 79 people interviewed who had specifically taken anabolic steroids, 41% said improving performance was the main reason for taking them, followed by pain relief (40%) and improving how they look (34%).

However, when this is widened out to include those who admitted taking other performance-enhancing substances, boosting results was no longer the primary reason.

Only 25% of users overall claim they have taken substances with the intention of improving performance.

"I think there are clearly a group of individuals seeking to enhance their performance by taking prohibited substances," said Sapstead, "and then there are others who were taking these substances because they have a body image problem, or actually because they think it's the done thing."

Is doping a younger issue?

Younger people are the main users of anabolic steroids in amateur sport, according to the poll for BBC Sport.

Among sports club members aged 18-34, 13% say they have taken steroids to support performance or recovery while playing. Not one interviewee aged 55 or over said they had used anabolic steroids. 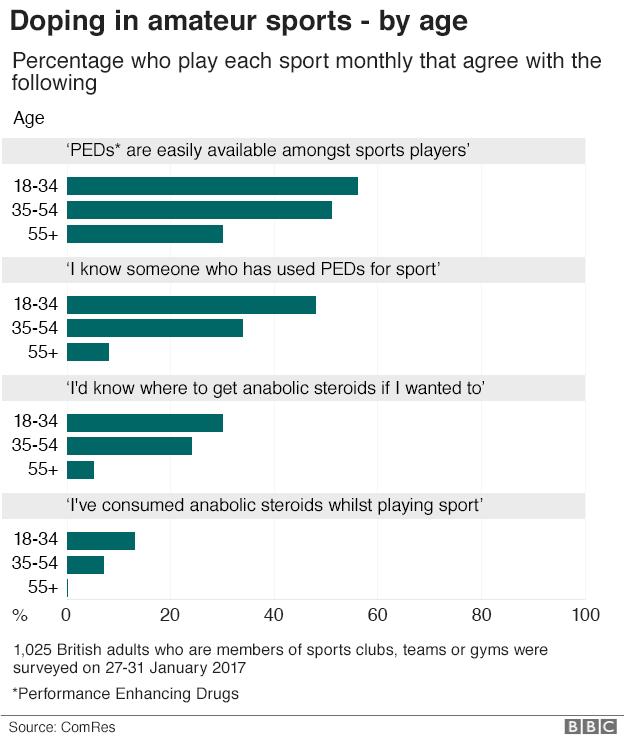 However, users aged between 35 and 54 are significantly more likely than those aged 18-34 to say pain relief is among the main reasons they have used steroids or other sports supplements.

But there is hardly any difference in gender, with 9% of men admitted taking steroids, compared with 8% of women.

And 71% of all those polled said they would not know where to get hold of anabolic steroids.

Using steroids for image reasons is a "worrying" problem among young people in Wales, according to the nation's social services and public health minister Rebecca Evans, who said in January: "It's not just a problem in sport - it is a wider societal issue."

What else are people taking?

According to the poll, a wide range of substances - both legal and illegal - are taken by amateur sports men and women to support their performance or recovery.

Performance-enhancing substances can also include recreational drugs and prescribed medications:

We also asked people about other substances they consumed while playing sport, including: energy drinks (68% had), pain-relief gels (60%), over-the-counter anti-inflammatory medicines (59%) and protein shakes (46%).

Case study: 'Curiosity not winning - why I doped'

Former amateur cyclist Dan Stevens was banned after refusing a test in 2014. He turned whistleblower but labelled Ukad's handling of his information "a catastrophic failure".

"I also think it is just a way of modern day life - we are living in a pharmacised world."

Stevens said he took thyroxine and testosterone on prescription, and EPO out of "curiosity".

"I'd always been a clean athlete and this situation happened to me when I was 39 years old. That was enough to see a huge, huge gain.

"But the real thing for me wasn't really about racing - I didn't do a lot of racing on these substances. The main thing was curiosity.

"I don't think in the amateur ranks it is about winning. You've got a situation where someone is overweight, a little bit fat, need to lean down, get in shape. And they get in shape.

"They then get railroaded into doing a marathon or a long bike ride or some kind of competitive event and they improve their fitness levels again and they become a healthier individual and become more body conscious and more health-orientated."

Which sports are most affected? 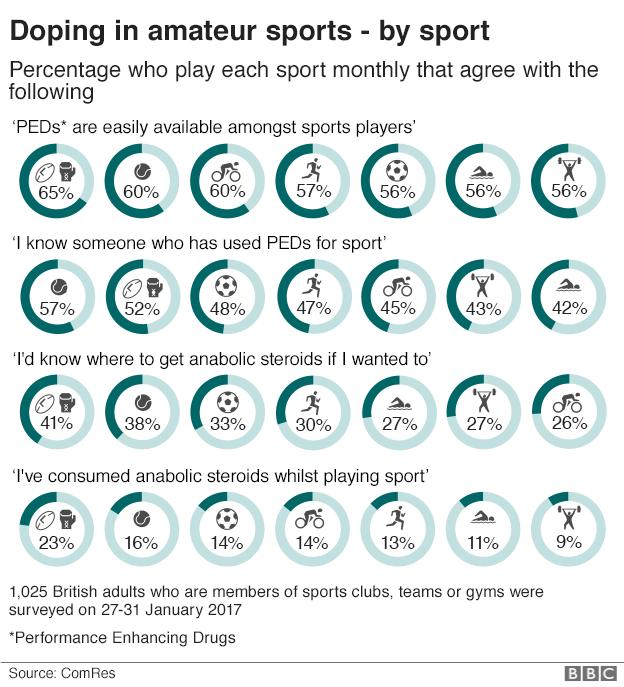 What is the 'gateway hypothesis'?

More than a third of people (36%) who report consuming recreational drugs to support their performance while playing amateur sport have also taken steroids.

Dr Lambros Lazuras, an assistant professor of social psychology at Sheffield Hallam University who studies doping behaviour, told BBC Sport that there is a "pill-taking culture" in amateur sport and general society, which can act as a "gateway" to stronger substances.

"There are people who engage in stacking practices, using as many as 10 substances at the same time," he explained. "For these people, it's not what they use anymore, it's what they want to achieve."

So what are the health risks?

"The use of steroids, for example, has been associated with problems like heart disease, kidney failure and even sudden death," said Dr Lazuras. "You're not just cheating, you're putting your life at risk.

"This is an emerging public health issue," claimed Dr Lazuras. "You're using substances that are meant to treat diseases, and you're actually misusing them without any prescription.

"We push people into exercise because we want to promote the health benefits. We forget that people in most exercise settings might consider using substances.

Case study two: 'You have to dope to be a good weightlifter'

A British weightlifter who has served a doping ban told BBC Sport steroid abuse is rife at all levels in his sport and that the culture starts at amateur level.

"It begins in the gym," the weightlifter, who wishes to remain anonymous, said. "In weightlifting it gets to the point where you're not growing anymore. You can train, train, train and not get anywhere.

"Every weightlifter will take steroids. Some of them are taking light stuff and some of them are really heavily using steroids - it all depends how much money you have.

"Is it easy to buy bread in the shop? That's how easy it is to get steroids in the UK.

"If you're not taking steroids, basically you're nowhere in the competition, you're not going to get anywhere really.

"I'm really proud of how they fight steroids in England. But the problem is, why are England losing? England won't cheat.

"I can't do something that I really love. Only because I've been cheating with steroids, come on. It's like I killed somebody. I'm not even an Olympic sportsman."

Lewis Conlin, 32, a publisher from Buckinghamshire, used a supplement containing the banned substance DMAA when he started weight-training in his early 20s.

DMAA is an amphetamine-derived substance banned from sale in the UK and named on Wada's prohibited list.

It has been linked with high blood pressure, tightening of the chest, stroke, heart attacks and even death, according to the Medicines and Healthcare Products Regulatory Agency.

"In terms of the energy and focus that I got, it was the best pre-workout supplement I'd ever had," Conlin, who was weight-training four or five days per week with friends, told BBC Sport.

"You felt invincible, you felt you could do anything, you were just completely zoned out. You'd stare at a weight and go and lift it. That was great. Afterwards wasn't so great.

"About three hours later you would have a crash and you'd have a real comedown. I'd be depressed and I'd be ratty, happy just to keep myself in isolation and then later on that day I was getting chest pains.

"I would have trouble sleeping and would have heart palpitations - but that didn't actually stop me from taking it the next day. The training I was doing was so high and so intense I just wanted to have that every day.

"Had I known at the time exactly what DMAA did to your blood pressure and your heart rate then there is no way I would have carried on taking it."

Should there be more testing in amateur sport?

More drug testing among amateur sports people is a "waste of time", according to one amateur cyclist who received a two-year ban for missing a post-race drugs test.

It would cost too much money and detract from focusing on drug use in the professional ranks, he added.

"I don't see the point at all," said the Briton, who asked to remain anonymous.

"What effect is it going to have on anything, unless it is something like a national championship where people can move on in the professional ranks and actually earn a living from it? It is a problem then because you're actually affecting people's lives.

"How far do you go - do you want to test people for doing a fun run? It's up to them if they want to do whatever they want to do, in my opinion," he said.

"If you want to catch someone then catch the right people - like the people that win the Tour de France and get away with it.

"But then that's too much politics and money involved. They would rather get someone that doesn't mean anything because it is easy."

How much does testing cost?

Ukad has an annual budget of around £7m, mainly state funding. A single drug test costs around £350.

Ukad directs the vast majority of its testing to elite sport, with Sapstead saying: "I would love to able to address the issues that we see at an amateur level, but the reality is we just don't have the resources to do that.

"I strongly believe a further investment needs to be paid from sport, whether that's from a levy on ticket sales - some contribution into a greater integrity pot of money, that's distributed not just to anti-doping, but anti-corruption bodies.

"Someone somewhere needs to put their hand in their pocket and their money where their mouth is, and start to help pay for us to do this job, and do it as effectively and efficiently as possible.

"Actually, you're competing, and therefore it absolutely matters that everyone is toeing the line and playing a fair game."

How the poll was done

BBC Sport - using ComRes to conduct the poll - interviewed 1,025 British adults, who are members of sports clubs, teams or gyms, online, between 27 and 31 January 2017. The data was drawn from a nationally representative sample of British adults aged 18 or over and the full tables are available here.

All sports played by those interviewed are regulated by UK Anti-Doping, apart from gyms.

Have you ever taken a performance enhancing substance? Does your sport have a problem with doping? Get in touch using this link.