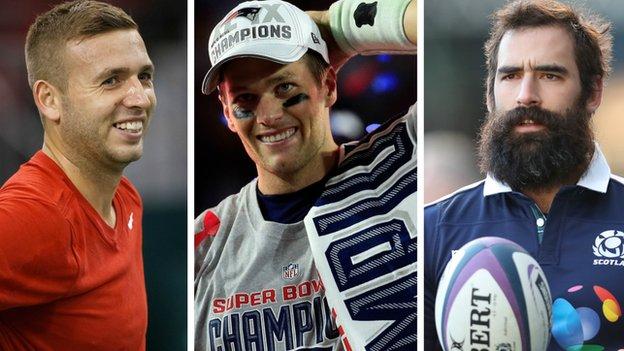 A selection of the biggest and best-attended sporting events in the world will be televised on the BBC and streamed online this weekend.

The Super Bowl, Six Nations and Davis Cup are all on your screens this weekend. As is sprint superstar Usain Bolt.

A full guide to BBC Sport's weekend offering across TV, radio and online can be found here.

For those who want to settle down on the sofa and indulge in sport, here are a selection of the weekend's highlights:

Can the 2015 champions repeat their success this year? Leon Smith's Great Britain side open their campaign with a first-round tie against Canada.

The wait is over. The Six Nations - which has the highest average attendance per match of any tournament in world sport - begins on Saturday. We'll be live at Murrayfield as Scotland begin their quest to give departing coach Vern Cotter the perfect send-off.

Tracey Neville's England have already beaten South Africa but lost to New Zealand. It's a must-win game between two countries with the ultimate sporting rivalry.

It's being hailed as a revolutionary event for athletics. And Jamaican sprinter Usain Bolt is the star attraction, so why not watch history being made? In the meantime, find out all about the new event with our handy guide.

One of the biggest sporting events in the world, which drew in 116 million viewers in the USA alone last year. And Lady Gaga is headlining the half-time show. Again, we've put together a handy guide explaining why it's worth throwing an all-nighter on the sofa.