Former athlete Sir Roger Bannister is made a Companion of Honour.

BBC cricket correspondent Jonathan Agnew is made a MBE, as are a host of gold medal winners from the Olympics and Paralympics in Rio, with more than 100 people in sport included on the list.

An extraordinary year for Murray

Scot Murray, previously honoured with an OBE in 2012, had said he was "too young" for a knighthood. 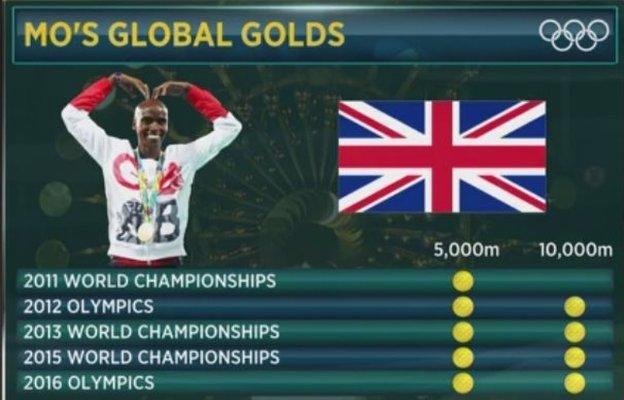 Mo Farah, 33, completed a 'double double' in Rio as he won his fourth Olympic gold and became only the second man to retain the 5,000m and 10,000m titles.

His knighthood completes a remarkable journey for the runner who moved from Somalia to England aged eight.

"Looking back at the boy who arrived here from Somalia, not speaking a world of English, I could never have imagined where I would be today - it's a dream come true," he said.

Dressage rider Lee Pearson carried the flag for Great Britain during the Paralympic opening ceremony and went on to win the 11th gold medal of his career.

The decorated Paralympian already held the MBE, OBE and CBE for services to equestrianism and to disabled sport.

"For me, born with a severe disability, I've had 15 major operations to iron me out and to be here today receiving this, it's just really, really surreal," he said.

At 87, Sir Roger Bannister has chalked up another significant achievement. The first man to run a mile in under four minutes, in 1954, he joins an elite group as a Companion of Honour - a special award for service of conspicuous national importance limited to 65 people at a time.

Recipients wear the initials CH after their name and members currently include Stephen Hawking and Desmond Tutu.

Jessica Ennis-Hill, 30, announced in October she was retiring from athletics after winning an Olympics silver medal in the summer.

She secured heptathlon gold at the London 2012 Olympics and will be awarded her third World Championship after Tatyana Chernova was stripped of the 2011 title.

"What a team to have been apart of. Dame...truly truly honoured!" she posted on Twitter.

Five-time medallist Katherine Grainger, who also becomes a dame, is Britain's most decorated female Olympian after taking silver alongside Victoria Thornley in the double sculls.

The 41-year-old won gold in London after silvers in Sydney, Athens and Beijing.

The pair, who boast 10 Olympic gold medals between them, were married in September.

There is also a CBE for British Paralympic Association chairman Tim Reddish.

Nicola Adams became the first British boxer to retain an Olympic crown for 92 years by winning the flyweight title in Rio.

Kate Richardson-Walsh is also given an OBE after captaining Great Britain's women to a first Olympic hockey gold medal.

It's an incredible honour. We've really put hockey on the map

In football, Chris Coleman guided Wales to the semi-finals at Euro 2016, their first appearance at a major tournament since 1958.

There are OBEs for cyclist Ed Clancy, part of the victorious team pursuit in Brazil, plus Pete Reed and Andrew Triggs Hodge, after rowing golds at a third consecutive Olympics.

John Gosden, who has trained more than 3,000 winners, is honoured for services to horse racing.

From TMS to MBE for Aggers

Among the MBEs are Northern Ireland football manager Michael O'Neill and former cricketer Jonathan Agnew, a regular on the BBC's Test Match Special, who temporarily switched to Olympic equestrian commentary in the summer.

It's such a prestigious award. How many 15-year-olds can say they have a MBE?

Swimmer Bethany Firth, who was ParalympicsGB's most successful athlete in Rio with three golds and a silver, is on the list along with Ellie Robinson, who claimed gold in the pool aged 15.

The author, who led the Hillsborough Independent Panel's research team, said he could not receive an honour, and had made that decision in protest "at those who remained unresponsive" to help families and survivors affected by the 1989 disaster in which 96 football fans died.

All the sporting honours

COMMANDERS OF THE ORDER OF THE BRITISH EMPIRE (CBE)

OFFICERS OF THE ORDER OF THE BRITISH EMPIRE (OBE)

MEMBERS OF THE ORDER OF THE BRITISH EMPIRE (MBE)

MEMBERS OF THE ORDER OF THE COMPANIONS OF HONOUR

MEDALLIST OF THE ORDER OF THE BRITISH EMPIRE (BEM)