Memphis Depay, who cost Manchester United £31m in May 2015, recognises his career at the club may be over. The 22-year-old is open to a loan move to Fenerbahce in January. (Guardian)

MLS side LA Galaxy are considering making a move for 35-year-old Manchester United striker Zlatan Ibrahimovic when his contract runs out at the end of the season. (Daily Mirror)

Sunderland manager David Moyes believes that the problems experienced by Jose Mourinho shows the criticism of his time at Manchester United was unfair. (Daily Mail)

Mourinho plans to sell at least eight of his Manchester United players over the next two transfer windows. (Daily Telegraph)

Arsenal defender Hector Bellerin, 21, has said he is flattered by interest from Manchester City and Barcelona but is happy with the Gunners. London Evening Standard

Liverpool and Tottenham are both tracking 25-year-old striker Moussa Marega - who is on loan at Vitoria Guimaraes from Porto and has a release clause of £35.5m. (L'Equipe, via Sports Witness)

Yaya Toure's agent Dimitri Seluk says he will not be apologising to Manchester City manager Pep Guardiola, despite the 33-year-old midfielder saying sorry for "misunderstandings of the past". (Talksport)

Interim England manager Gareth Southgate says he might reject the chance to take the job on a full-time basis. (Guardian)

Marseille have already taken up the option to sign on-loan 23-year-old winger Florian Thauvin from Newcastle. (La Provence - in French)

West Brom have sent 23-year-old striker Saido Berahino to a fitness centre in the south of France. (Birmingham Mail)

Liverpool are prepared to subsidise up to half of out-of-favour defender Mamadou Sakho's £100,000-a-week wage to ensure the 26-year-old leaves on loan in January. Stoke and Lille are interested. (Squawka)

Everton striker Oumar Niasse, 26, could move to Turkey in January after failing to make an impression at Goodison since his switch from Lokomotiv Moscow. (Liverpool Echo)

Fenerbahce's 27-year-old defender Simon Kjaer described Manchester United striker Zlatan Ibrahimovic as "arrogant" and "chest-puffing" after clashing with him in Thursday's Europa League game - a 2-1 win for the Turkish side. (Kanal 9, via Guardian)

Simone Zaza's agent - his father Antonio - will travel to London for talks about his son's future at West Ham. He says he cannot guarantee the 25-year-old Italian striker will still be with the Hammers come January. (Calciomercato - in Italian)

Fiorentina midfielder Milan Badelj, 27, is a possible January target for Chelsea as he nears the final 18 months of his current contract with the Viola. (Gazzetta dello Sport, via Talksport)

Former Manchester United and Chelsea midfielder Juan Sebastian Veron will come out of retirement at the age of 41 to play for Argentine club Estudiantes. (La Nacion - in Spanish)

Arsenal boss Arsene Wenger has urged midfielder Mesut Ozil, 28, to commit his future to the club by signing a new contract. (Daily Telegraph)

Wenger believes Ozil has reinvented himself as the new Dennis Bergkamp and can become an Arsenal legend. (Daily Express)

Kurt Zouma has not played for Chelsea since suffering a knee injury in February but is closing in on a first-team return. 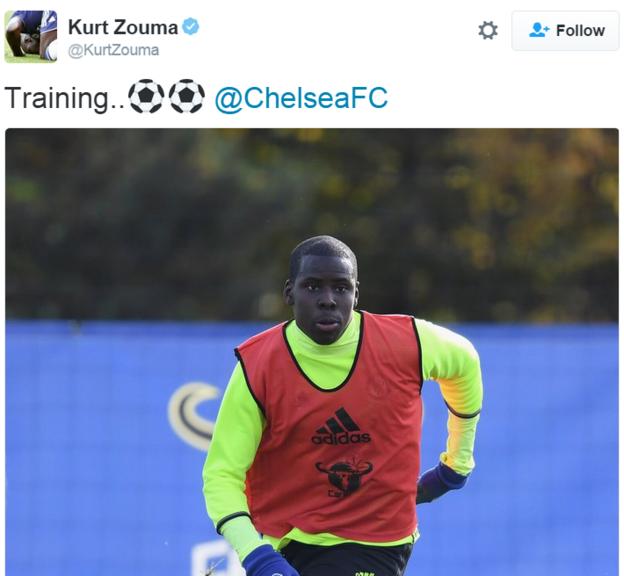 The agent of Manchester United striker Anthony Martial has admitted that the 20-year-old felt "disappointed" that the club's number nine shirt was taken from him and given to new signing Zlatan Ibrahimovic in the summer. (RMC Sport - in French)