Meanwhile, former Paris St-Germain manager Laurent Blanc is stalling on signing an agreement to replace Frank de Boer at Inter, because he believes he could replace Jose Mourinho at Manchester United.(Sun)

France defender Mamadou Sakho, 26, is set to be sold in January after falling out of favour at Liverpool.(L'Equipe - in French)

Wolves would like to speak to former England boss Sam Allardyce about becoming their new manager.(Sun)

Barcelona have been linked with Stoke's England international Glen Johnson, 32, as they search for an experienced right-back. (Mundo Deportivo - in Spanish)

Tottenham Hotspur have held talks with taxi company Uber over a naming rights deal for their new stadium worth £20m a year. (Squawka)

Schalke intend to activate an option to sign 21-year-old Tottenham midfielder Nabil Bentaleb - who is on a season-long loan at the German side - on a permanent basis for £17m. (Mirror)

Leicester's hopes of bringing former Stoke midfielder Steven N'Zonzi back to the Premier League have been dented as the 27-year-old has opened contract extension talks with Sevilla. (Leicester Mercury)

Juventus are poised to start the bidding for Borussia Monchengladbach midfielder Mahmoud Dahoud, 20, with a £13.5m bid in January. The Manchester City and Liverpool target's contract reportedly contains a clause allowing him to leave for £8.4m in the summer. (Talksport)

Arsenal and Everton are tracking Hull's 17-year-old Josh Tymon, and both clubs plan to make bids for the defender in January. (Mirror)

Paris St-Germain still want to sign Atletico Madrid forward Antoine Griezmann and would be prepared to pay the buyout clause of 100m euros (£89m) in the 25-year-old's new contract. (Fichajes.net - in Spanish)

Spanish club Real Sociedad have given a job to a homeless man who had been sleeping rough outside the stadium. (Marca - in Spanish)

Tottenham's 22-year-old midfielder Eric Dier believes his Spurs and England team-mate Harry Kane, 23, should have made the shortlist for the Ballon d'Or.(Daily Mail)

Liverpool are set to leave their historic Melwood training ground so that they can bring the first and youth teams together on one site. The club's academy is based six miles from Melwood, at Kirby.(Daily Express)

Dutch striker Robin van Persie tweeted pictures of the awards he received for reaching 100 caps for the Netherlands last month. 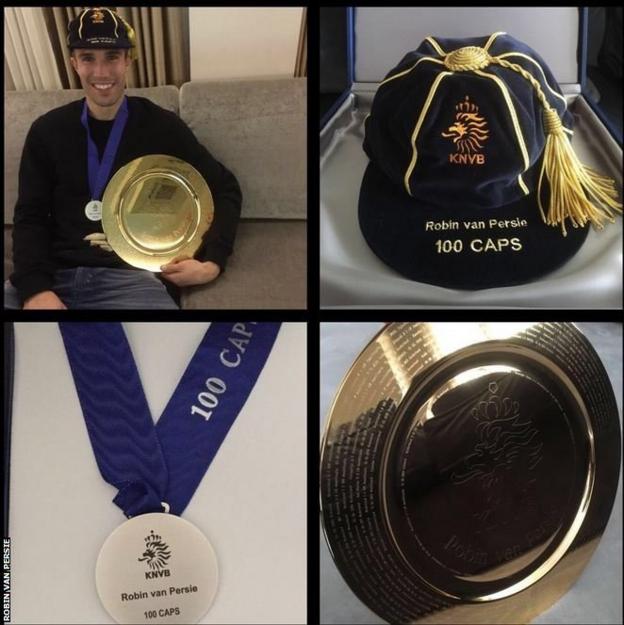 Midfielder Bastian Schweinsteiger may be exiled from Manchester United's first team but that did not stop him from attending Old Trafford to cheer on his side against Manchester City in the EFL Cup. (Twitter)

Referee Mike Dean appeared to sniff his assistant referee as the teams lined up for the Manchester derby in the EFL Cup. (Sky Sports)

Southampton poked fun at Sunderland, who tweeted about Nathan Redmond creating a chance in the EFL Cup match between the two sides, despite the Saints winger being on the bench. Southampton replied with this...

Tottenham plan to include a see-through tunnel wall in their new stadium that will give a select group of spectators the chance to watch the players walk out onto the pitch. (Sun)

Ciro Immobile's wife posted a video of the Lazio and Italy striker lost in a world of his own as he plays a game of Fifa. (Fox Sports)

The death of Brazil legend Carlos Alberto has given the Brazilian Football Confederation the chance to clarify that Wilson da Silva Piazza started the move that culminated in Carlos Alberto thumping home the fourth goal against Italy in the 1970 World Cup final. Many sources wrongly attribute Piazza's pass to centre-back partner Brito. (Times - subscription required)