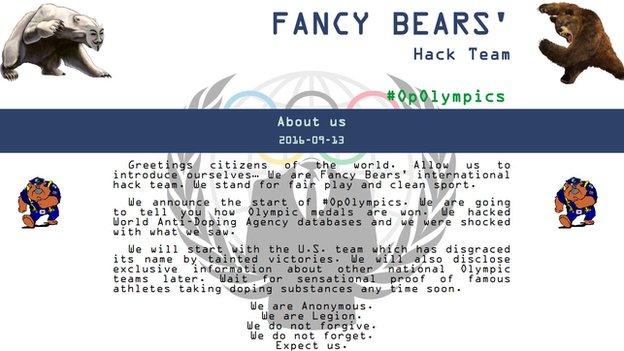 Hackers who leaked medical records of some of the world's biggest sports stars may have doctored some data, the World Anti-Doping Agency says.

The Fancy Bears published documents stolen from Wada, claiming they wanted to highlight doping in sport.

Most records showed when athletes had been given permission to take banned substances to treat medical conditions.

A Wada investigation has now found "not all data released by Fancy Bears accurately reflects" Wada's own data.

Britain's most decorated Olympian Sir Bradley Wiggins and Mo Farah, the two-time double Olympic 5,000m and 10,000m champion, were among those to have medical documents released by the cyber-espionage team.

The Fancy Bears described themselves as "an international hack team" who stood for "fair play and clean sport" when they published data from scores of athletes in six separate waves.

Almost all of those named by the hackers had been given permission by anti-doping bodies to take otherwise banned substances under the therapeutic use exemption (TUE) system because they had a medical need - many, including Kenny and Wiggins, have asthma conditions.

An initial Wada investigation questions the accuracy of some of the data the hackers claimed came from the anti-doping authority.

"We are continuing to examine the extent of this as a priority and we would encourage any affected parties to contact Wada should they become aware of any inaccuracies in the data that has been released," it said.

Wada employed cyber-espionage specialists to look into the data breach. They discovered hackers were able to access Wada's system "multiple times" in August and September after obtaining passwords and usernames with a 'phishing' attack on Wada and International Olympic Committee emails, tricking people into divulging personal information.

Wada added it had changed systems and procedures, introduced new IT measures and advised all users of its data system following the attack.