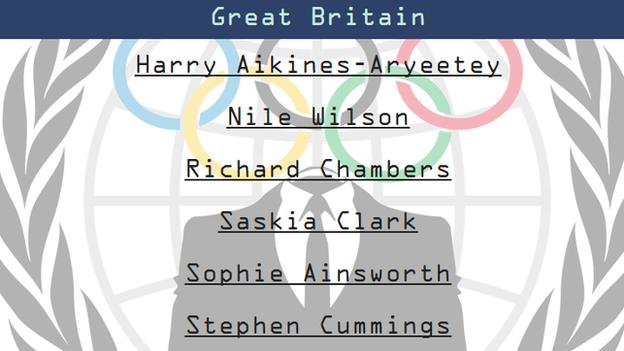 The medical records of six British athletes are among the latest to be made public by hackers.

The records mostly detail therapeutic use exemptions (TUEs), which allow banned substances to be taken for athletes' verified medical needs.

There is no suggestion athletes named are involved in any wrongdoing.

American golfer Patrick Reed, who will play in the Ryder Cup next week, is also on the list as is South African swimmer Cameron van den Burgh, who won gold in the 100m breaststroke at London 2012.

The files were stolen from a World Anti-Doping Agency (Wada) database.

Cummings won the Tour Of Britain in early September, having also claimed stage seven of this year's Tour de France.

Clark took gold in the 470 women's sailing at Rio 2016, along with partner Hannah Miles, while gymnast Wilson took bronze in the horizontal bar.

Aikines-Aryeetey was part of the GB relay team that finished fifth in the 4x100m at this year's Olympics. Chambers made the semi-finals of lightweight men's double sculls and Ainsworth was eighth in the 49ers FX sailing.

What are therapeutic use exemptions?

A TUE allows an athlete, for medical reasons, to take a prescribed substance or have treatment that is otherwise prohibited.

British athletes must contact their national governing body or follow UK Anti-Doping (Ukad) guidance before applying for a TUE.

There are strict criteria for one to be granted:

Ukad says it has "a number of robust controls in place to make it as difficult as possible" for athletes to misuse the system.