Paris St-Germain defender David Luiz could be in line for a shock return to Chelsea. The Premier League club have offered £30m plus add-ons for the Brazil international, who left for the French champions two years ago in a £50m deal. (Sky Sports)

England midfielder Jack Wilshere, 24, is set to complete a season-long loan deal with Crystal Palace. The Gunners received 22 offers from clubs in England and in Europe for Wilshere. (Daily Mirror)

Alternatively, Wilshere could join AC Milan with the Serie A club wanting to complete a season-long loan deal with a £30m option to buy the player. (Sun)

Chelsea will complete a £23m move for Fiorentina's Spanish full-back Marcos Alonso, 25, and will look to the loan market for another central defender. (Telegraph)

However, Tottenham have given up on signing Crystal Palace winger Wilfried Zaha, 23. (Sky Sports)

Burnley are close to signing Derby County midfielder Jeff Hendrick, 24. The Republic of Ireland international will cost the Clarets a club record fee in excess of £10m. (Daily Mail)

Valencia have made an offer to sign Manchester United's Argentina defender Marcos Rojo, 26, on loan. (Squawka)

West Brom will bid £32m for Watford's Nigeria forward Odion Ighalo, 27. Manager Tony Pulis will use the sale of English striker Saido Berahino, 23 - set to move to Stoke - to part-fund the purchase. (Mirror)

Manchester City's France defender Eliaquim Mangala, 25, is on the verge of a two-season loan deal back to Porto. (Manchester Evening News)

Mesut Ozil has tweeted a video of his new Arsenal team-mate Shkodran Mustafi dancing with fellow Gunner Per Mertesacker, while the trio were on international duty. He added the caption: "I hope to see more of those dance moves @Arsenal soon @MustafiOfficial @mertesacker #GermanGunners."

An Arsenal fan who on 12 August posted "Tell you what, if we sign Mustafi i'll give everyone that RT's this £20", received a reply from the Gunners after they signed Shkodran Mustafi. The tweet included a video of the German saying: "Hi, I hope you don't regret the tweet."

Roma goalkeeper Wojciech Szczesny, who is on loan from Arsenal, has welcomed Joe Hart to Serie A on Instagram, after the England number one arrived at Torino.

Calum Chambers tweeted his excitement at joining Middlesbrough on loan from Arsenal.

All was not what it seemed when Scottish League One side Queen's Park tweeted this.... 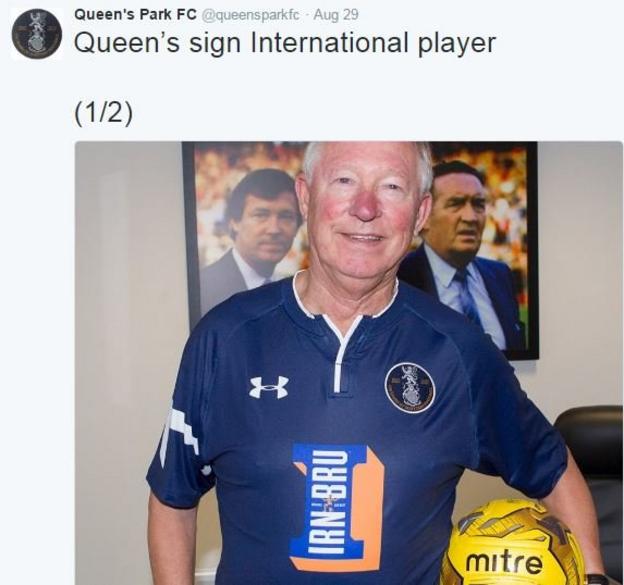 That is because former Manchester United manager Sir Alex Ferguson had returned to the first club he played for to launch their 150th anniversary kit.

Swansea City's new signing Alfie Mawson will be missed by one Barnsley fan. Mawson struck up a friendship with four-year-old Alfie Ledgeway, who suffers from a variety of illnesses, while at the Yorkshire club. (WalesOnline)