Chelsea have yet to make a bid for their former striker Romelu Lukaku, 23, with Everton having made clear they will not consider offers for their Belgium international, £28m club-record signing. (Daily Mail)

Arsenal and Everton target Julian Draxler has been fined by Wolfsburg after the 22-year-old Germany forward demanded a transfer. (Bild, via Metro)

An unnamed Premier League club has made a £72m bid for Real Madrid and Colombia midfielder James Rodriguez, 25. (Marca, via Daily Star)

Jose Mourinho says if he had been named Manchester United manager earlier, the club could have beaten Bayern Munich to the signing Portugal midfielder Renato Sanches, 18. (Sport TV, via Daily Star)

Liverpool manager Jurgen Klopp has warned Crystal Palace and any other clubs interested in signing Christian Benteke, 25, that the Belgium striker will not be sold below his value as a "present". (Evening Standard)

Leicester City could bid £25m for Brazil and Santos forward Gabriel Barbosa, 19, who is also a target for Juventus and Inter Milan.(HITC Sport)

Middlesbrough's hopes of signing Zinedine Zidane's son Enzo for the season have increased after Real Madrid told the 21-year-old midfielder he could leave on loan. (Daily Mail)

Bayern Munich want to keep Poland striker Robert Lewandowski at the club, but have refused to pay the 27-year-old "crazy" wages.(Bild, via Daily Mail)

Newcastle United's France midfielder Moussa Sissoko, 26, could be set for a move to Paris St-Germain, though the French champions will have to pay £35m to sign him.(Daily Mirror)

Liverpool will be forced to send 19-year-old Brazilian midfielder Allan Rodrigues de Souza out on loan this season because he does not yet qualify for a UK work permit. (Sun)

Defender Dani Ayala, 25, is the first of a number of senior Middlesbrough players who will sign new contracts over the coming weeks. (Teesside Gazette)

West Ham's move for Inter Milan's Italy defender Davide Santon, 25, has fallen through and the club will now look to other targets. (whufc.com)

Defender Tony Hibbert, who was released by Everton this summer after 25 years at the club, says they are "no longer the people's club" but instead "a ruthless, horrible business". (Daily Mail)

Midfielder Alex Pritchard, 23, said he "could not wait to get out" of Tottenham after signing for Norwich City. (Daily Mirror)

Chelsea midfielder Nathaniel Chalobah was less than impressed at being mistaken for new signing Michy Batshuayi on the club's pre-season tour, posting this tweet... 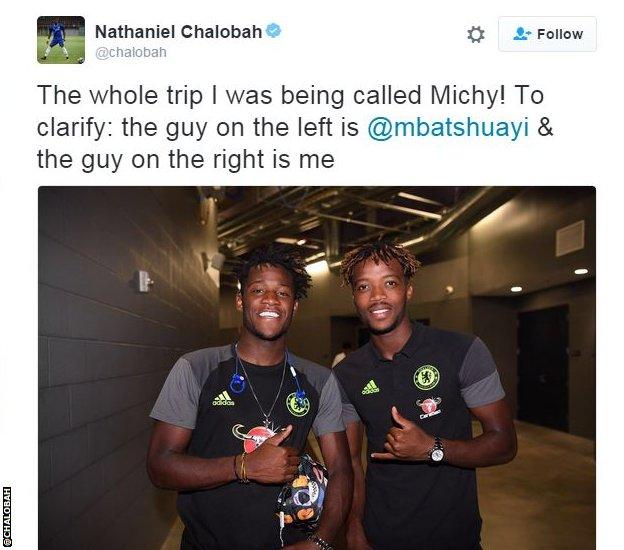 Though he did add...

Former Spain international Fernando Llorente was pleased to complete his switch from Sevilla to Swansea...

Arsenal manager Arsene Wenger got an unusual pre-match gift before his side's friendly against Viking FK - the Norwegian side handed the Gunners boss a sword. (Arsenal TV, via Daily Mirror)