Manchester United coach Ryan Giggs, who is expected to leave the club, is a contender for the manager's job at Championship side Nottingham Forest. (Mirror)

Giggs may be overlooked for the job at the City Ground with Forest's owners hoping to appoint a foreign coach. They have contacted Spaniard and former Olympiakos boss Michel. (Nottingham Post)

Manager Laurent Blanc will leave Paris St-Germain by the end of the week, says his agent. (Europe 1 via Guardian)

Liverpool are planning a bid for Newcastle and England winger Andros Townsend, 24. (Mirror)

Manchester City are also interested in Townsend, who has a release clause of around £10.5m. (Telegraph)

AC Milan striker Fernando Torres, 32, will sign a one-year deal with Atletico Madrid, where the Spaniard spent last year on loan from the Serie A side. (Marca)

Swansea are ready to offer midfielder Leon Britton and full-back Angel Rangel, both 33, new contracts as they look to retain two of the senior figures in Francesco Guidolin's squad. (South Wales Evening Post)

Sheffield Wednesday manager Carlos Carvalhal is not in the running for the vacant Southampton job. (Sheffield Star)

Burnley are yet to receive any bids for defender Michael Keane, 23, with Premier League champions Leicester and Everton interested in the player.(Burnley Express)

West Brom have made a £4m bid for QPR winger Matt Phillips, 25, a year after they were unable to agree a fee. (Birmingham Mail)

Manchester City striker Kelechi Iheanacho, 19, could miss the start of the season if he is called up by Nigeria for the 2016 Olympics in Rio. (Manchester Evening News)

Former Leeds and Rotherham boss Steve Evans, 54, is set to take over at League One Oldham. (Oldham Evening Chronicle)

Wales players were in a celebratory mood after their 3-0 win over Russia sealed top spot in Euro 2016 Group B. Gareth Bale posted this photo of him with midfielder Joe Ledley and goalkeeper Wayne Hennessey from the dressing room.

The players were not the only ones who enjoyed Wales' win. Former world champion boxer Joe Calzaghe tweeted "Get in Wales!!" while Wayne Rooney's favourite band the Stereophonics were even more effusive in their praise for Chris Coleman's side as they posted: "Wales I love you!!! Top of the table! Love you boys!!"

He was snubbed by Ronaldo after Iceland's historic 1-1 draw with Portugal, but Aron Gunnarsson has finally got his hands on the forward's shirt... 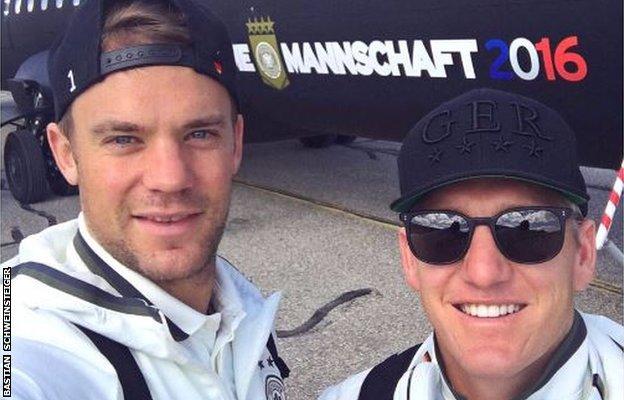 Injured Manchester City captain Vincent Kompany has been in the gym before the new season. He posted a picture on Instagram of him training on an exercise bike as he recovers from the thigh injury which ruled him out of Euro 2016.

'Will Grigg's on fire' might be the song of the summer, and England fans have now adapted the lyrics to honour striker Jamie Vardy. (Joe.co.uk)