Arsenal have sent a representative to see Borussia Monchengladbach midfielder Granit Xhaka, 23, play 30 times this season as they look to make a major signing this summer. (Daily Mirror)

England captain Wayne Rooney, 30, wants to play for Manchester United's reserve team to find his fitness before the finals in France as he recovers from injury. (Daily Star)

Liverpool striker Mario Balotelli, 25, has received an offer to play in China for Jiangsu Suning.(Il Milanista via Daily Star)

West Ham will turn to Manchester City striker Wilfried Bony, 27, if they fail to sign Michy Batshuayi, 22, from Marseille.(Daily Telegraph)

Tottenham, who are chasing the Premier League title, will agree a deal to play European ties at Wembley while their new stadium is built. (Sun)

Aston Villa may not appoint a new manager until the end of the summer - and they want someone with Premier League experience. (Guardian)

Gary Neville, who has been offered his old job as a TV pundit, remains in Spain considering his options after being sacked as Valencia boss. (Daily Mail)

Arsenal could miss out on being crowned Premier League champions even if they win all eight remaining games, says Spain full-back Nacho Monreal, 30. The Gunners are 11 points behind leaders Leicester City with one game in hand. (arsenal.com)

Newcastle United are set to rely on third-choice goalkeeper Karl Darlow, 25, to help keep them in the Premier League - even though he only has 90 minutes of top-flight experience. The Magpies are without the injured Tim Krul and Rob Elliot for the rest of the season. (Newcastle Chronicle)

Watford forward Troy Deeney, 27, deserves a chance to prove his worth at international level with England, according to the club's former striker Luther Blissett. (London Evening Standard)

Bournemouth midfielder Harry Arter, 26, says he will only remember the club's maiden Premier League campaign as "the worst season of my life off the pitch" after the death of his daughter. (Bournemouth Daily Echo)

Southend United manager Phil Brown, 56, remains favourite to take over at Bolton Wanderers although the Championship's bottom club are in no hurry to make an appointment. (Bolton News)

Blackburn Rovers, who are facing a fifth successive season outside the Premier League, are more than £100m in debt despite cutting their annual losses by more than half. (Lancashire Telegraph)

Goalkeeper Shay Given will become Stoke City's oldest-ever league debutant at the age of 39 years and 348 days if he plays against Swansea City on Saturday. First-choice Jack Butland is out for the rest of the season after fracturing his ankle. (Stoke Sentinel)

Striker Nicklas Bendtner, 28, had a 'crisis summit' with Wolfsburg, with the Dane no longer getting near the first-team squad. (Bild - in German) 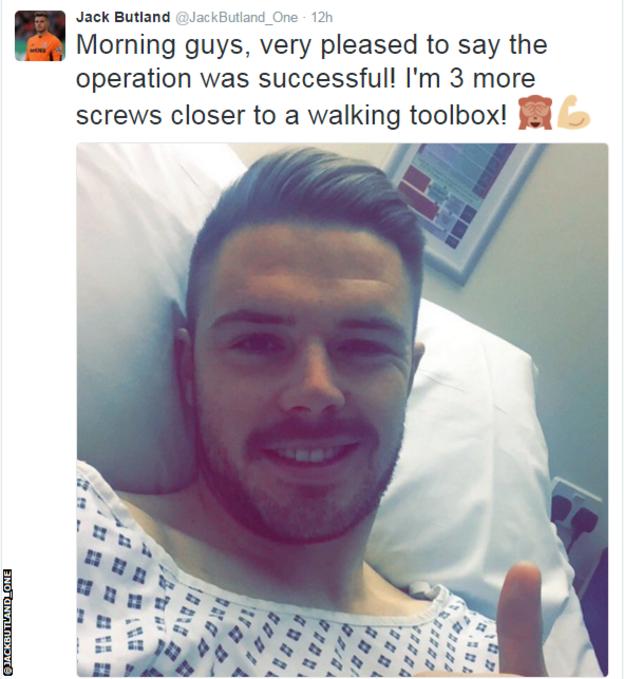 A smiling Jack Butland posts a picture of himself on Twitter after undergoing an operation on a fractured ankle which has ruled the Stoke City and England goalkeeper out of Euro 2016.

Liverpool forward Daniel Sturridge, 26, posted the following on Instagram after his first England game for over a year. "Good vibes to be back playing with @england last night but shame about the result. Big tings this weekend LFC vs Spurs."

Arsenal forward Alexis Sanchez says he has funded the construction of two artificial football pitches in his home town of Tocopilla in Chile. (arsenal.com)

Players from Aston Villa's Academy helped serve meals to the homeless as part of the club's pledge to support the community. (Birmingham Mail)