Chelsea could sack manager Jose Mourinho whether or not they beat Porto in the Champions League on Wednesday. (Daily Mirror)

Owner Roman Abramovich may act if the Blues lose to Porto and then against leaders Leicester in the Premier League next weekend. (Sun)

United boss Louis van Gaal's job is not under threat should they exit the Champions League on Tuesday. (Daily Express)

However, United will start their search for Van Gaal's successor at the end of the season if, as expected, the Dutchman confirms he will retire at the end of his contract in 18 months. (Daily Telegraph)

However, the club will sit down with the Dutch manager in the new year to determine whether the 64-year-old wishes to depart in the summer of 2017 or sign a fresh contract. (Guardian)

Bayern Munich boss Pep Guardiola could be prepared to take a 12-month break from football to make sure he lands the Manchester United job. (Sun)

Swansea have opened talks with former Everton and Manchester United boss David Moyes about taking over from Garry Monk, who will be sacked after a run of seven defeats in 11 league games. (Daily Mirror)

Alternatively, if Swansea decide to sack Monk, they could turn to former manager Brendan Rodgers, who has been out of work since his October departure from Liverpool. (Sun)

Spurs boss Mauricio Pochettino has warned off any potential interest for Hugo Lloris, 28, by saying the goalkeeper is key to the future of the club. (Express)

Crystal Palace chairman Steve Parish says the Eagles - who are set for American investment - can win the Premier League in the next 10 years. (Sun)

Arsenal target Adrien Rabiot, 20, has requested a loan move away from Paris St-Germain as he struggles to get game time at the Ligue 1 leaders. (Telefoot, via L'Equipe - in French)

Watford striker Odion Ighalo almost joined Chinese side Hebei China Fortune for £10m in the summer, but is delighted that he instead stayed with the Hornets, for whom he has scored nine goals this season. (Daily Mail) 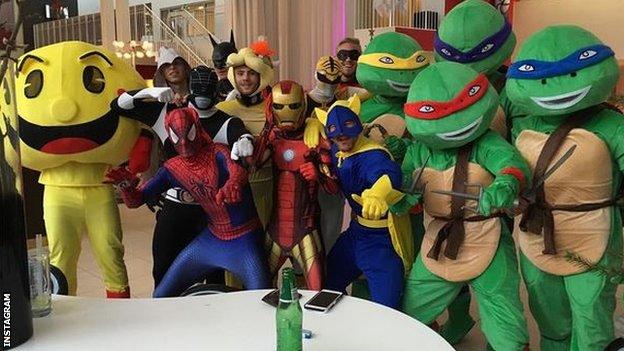 The Leicester City players seem to be enjoying their time as Premier League leaders, dressing up as characters such as Spiderman, Iron Man and Batman, with striker Andrej Kramaric posting a picture on Instagram.

Arsenal defender Nacho Monreal performed a trick shot in his kitchen to get an orange back in the fridge. He posted a video on his neat footwork on Twitter.

Tottenham's plans to build a new 61,000-capacity stadium have been described as "an act of pure vandalism" because of the planned demolition of three Victorian and Edwardian heritage buildings. (Evening Standard)