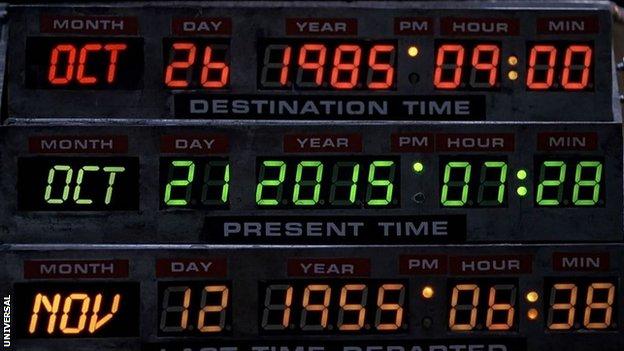 Hi, I'm pleased you could join us. It's been a hell of a long journey but I'm delighted to say we made it.

Welcome to the future.

Thirty years ago the Back to the Future movie franchise was unleashed on the world, at once capturing the imagination of a generation and holding it ever since.

One of the franchise's principal legacies is its famous depiction of the future, or more precisely, how the future looked when the central character, Marty McFly, was flung 30 years forward in time to 21 October 2015.

Which of course is today, if I haven't quite got your attention yet.

Hoverboards, self-drying jackets, power-lacing boots, dog-walking drones, flying cars and rehydrated pizza are just some of the things we find in this version of 2015 that haven't quite come to fruition, but then neither has Jaws 19, which is a bonus.

Sport also famously features in this snapshot of the future, with baseball's most heroic losers, the Chicago Cubs - who have not won the biggest prize in their sport since 1908 - the unlikely winners of the 2015 World Series.

But more on them later.

For now we're going to take a leaf out of the Back to the Future manual and indulge in a little prognostication of our own.

A job for life

Picture the scene. It's 2045. A Friday morning. Football season. A news conference is under way.

After seeing his team beaten a few days earlier by reigning Premiership League and Eurasia champions Salford City, the pressure is very much on the Arsenal manager.

Sitting in his usual seat facing the world's media, the 95-year-old Arsene Wenger is now in his 50th year at the helm and boasting a record of 48 successive Champions League group-stage qualifications without actually winning the damn thing.

But it's his failure to land a league title for 41 years that has increased the pressure a tad. And, as the questions get ever more probing, Wenger's internal circuits freeze, causing him to 'ak ak ak' like a martian from the Smash adverts.

You see, this isn't quite the Arsene Wenger we know today. To borrow a quote from another famous film franchise for a moment: "He's more machine now than man."

Even as we sit here now in 2015, boffins employed by the 2045 Initiative are eagerly hacking away at the coalface of immortality.

According to its website, the "mega-project" of the 2045 Initiative is to "create technologies enabling the transfer of an individual's personality to a more advanced non-biological carrier, and extending life, including to the point of immortality".

So you see it's not such a stretch to imagine Wenger holding court at the Emirates 30 years hence, assuming he gets in line for the 2045 Initiative treatment. And it works.

But of course not everyone's happy, and if we return briefly to that news conference in 2045, somewhere at the back of the room a brain in a jar marked 'Piers Morgan' bubbles and froths in apparent fury.

A cleaner future in store?

We can't have a prediction of the future without considering the environment and dwindling fossil fuels, which leads us to Formula 1.

The demise of F1 has been predicted for some time, with critics arguing the world's most sophisticated motorsport series must one day soon ditch the internal combustion engine, which remains a vital component of the sport's modern hybrid power units.

In truth, to predict the internal combustion engine will still be with us in 2045 is probably more outlandish than the alternative, especially when the future of motoring is already humming merrily among us.

Electric motor technology has advanced to a point where we already have an all-electric motorsport series - Formula E - and it seems inevitable this technology will have usurped F1 in its current guise as we approach the middle of the century.

But don't take my word for it.

Sir Richard Branson, who bankrolled an F1 team in 2010 and backs the Virgin Racing team in Formula E, knows a thing or two about innovation and said earlier this year he was in no doubt of the future direction of motorsport.

"If you turn the clock forward 30 years we will be powering the world with clean energy. We won't be polluting our children, or our grandchildren," he said.

"Formula E is going to grow as clean energy generally is. Twenty years from now there will be no new cars being built that do not run only on battery power. Internal combustion technology is antiquated, it will disappear over the next 20 years.

"The future is going to be a fascinating one, and I'm taking my pills so I can live to see it."

There's a general feeling among sports scientists that human beings are more or less at the limit of what can be achieved over 100m.

A recent study by the International Association of Athletics Federations (IAAF) stated that 9.27 seconds might be the quickest a man could be expected to cover the distance in, shaving about three tenths of a second off Usain Bolt's existing record.

But Mark Jarvis, the director of performance solutions at the English Institute of Sport, believes even that time is unattainable - and predicts that by 2045 the nature of sprinting will have changed out of sight, with races between pure "flesh and bone" athletes little more than a "novel throwback".

"Most attempts to model the limits to sprint performance typically make predictions in the region of 9.4 seconds," he told BBC Sport.

"However, this is based on restricted thinking which assumes that we will still rely solely on the tissues provided by mother nature. We have already reached the point whereby interventions such as prosthesis, which have previously been intended to allow disabled athletes to perform in the same manner as able-bodied athletes, are now able to outperform human limbs.

"For example, the blades used by Paralympians replicate the elastic return which the Achilles tendon provides without the inconvenience of fatiguing calf muscles."

Jarvis explains the reason some people expect the 100m record to progress below nine seconds is down to misleading data.

"Looking through the record books over the 20th Century would certainly lead one to wonder where human performance could go to by 2045," he says. 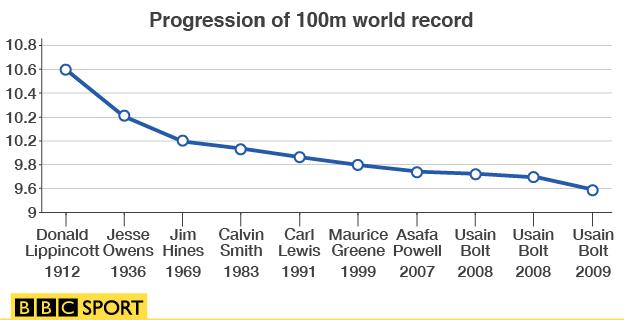 Jarvis points to a 2014 study that found the difference in distance travelled over 100m between Jesse Owens' 10.2 in 1936 and the times set by Usain Bolt in in recent years amounts to about 14 feet.

"But when we allow for technical equipment advantage through the introduction of starting blocks and high-tech track surfaces, this gap is reduced to a single stride," he adds.

"So humans have advanced, for sure, but the pace of this march may be somewhat overplayed."

'Doping is much bigger than just drugs'

Doping is rarely out of the headlines these days, but what will it actually mean to be a 'doper' in 2045?

Already 'gene doping' - the practice of altering a person's genetic make-up in order to make them stronger or faster - is being spoken of as the next great challenge to the world's anti-doping authorities.

Yet in 30 years' time the race to gain an advantage in sport may have morphed into something else entirely.

"In the modern era doping is much bigger than just drugs," says Jarvis. "Genome engineering is starting to emerge, at least as a concept.

"By 2045, we may well have reached the age of 'information doping'. Right now, the sports world is clamouring over the competitive advantages potentially offered by data analytics. In 30 years the growth of artificial intelligence (AI) may be dominating information doping.

"A huge number of sports are underpinned by decision-making. The difference between winners and losers is the decisions they make. As AI advances there is a very real possibility that the ability of the human brain to detect stimuli, process them and produce a solution may be exceeded by machines."

A prophesy destined to be realised?

Before we dismiss these predictions out of hand, it's probably worth considering one last thing.

When Back to the Future II crowned the Chicago Cubs as 2015 World Series champions, it did so with a nod and a wink. In 1989, when the second film was released, the Cubs had gone 44 years without an appearance in the World Series, and over the 26 years that have followed they have grimly clung to those underwhelming standards.

But in 2015 they are on the brink of reaching the World Series as one of the final four teams left competing in the MLB post-season.

Although they trail in their ongoing best-of-seven series with the New York Mets, few are writing them off just yet.

Of course making the World Series and actually winning it are two very different things, but the prophesy is tantalisingly close to becoming reality.

Speaking recently about the possible accuracy of his "joke" prediction, Back to the Future writer Bob Gale said: "Whether the Cubs make it or the Cubs don't make it, the joke will still be funny.

"And if the Cubs do make it, then I'm a visionary."

OK we don't have hoverboards yet - well, not proper ones - and talking jackets aren't blow-drying their wearers, but it's just possible that one of Back to the Future's most famous and outlandish predictions will be realised right on cue.