The odds on Chelsea boss Jose Mourinho leaving the club before the end of the year have been shortened following his side's loss to Everton on Saturday.(Evening Standard)

Van Gaal does not want United fans to expect too much of Anthony Martial just yet, despite the 19-year-old's goalscoring debut against Liverpool.(Manchester Evening News)

Former Liverpool midfielder Steven Gerrard, 35, says he felt insulted by then-England caretaker manager Stuart Pearce when he was told he was being replaced as captain by Scott Parker in a toilet before a training session.(Mail on Sunday)

Manchester City are set to miss out on summer transfer target Paul Pogba with the French midfielder, 22, poised to join Barcelona when the Catalan club's transfer embargo comes to an end.(Sunday Express)

But Tuesday's Champions League tie with the Italian club could give Manchester City a chance to further assess Pogba's talents with another bid for his services possibly in the offing. (Independent)

This despite City boss Manuel Pellegrini saying that Pogba has a long way to go to match current City midfielder Yaya Toure, 32.(Mail on Sunday)

West Brom striker Saido Berahino, 22, is determined to leave the Hawthorns and will turn down a lucrative new offer from the West Midlands club following his near-departure at the end of the summer transfer window.(Sunday Mirror)

Free agent Kevin Nolan could re-join Bolton as the midfielder, 33, looks for a new club following his departure from West Ham in August. (Sunday Mirror)

Newcastle have dismissed reports linking striker Papiss Cisse, 30, with a move to the Middle East in January.(Newcastle Chronicle)

England manager Roy Hodgson says he will not give Liverpool midfielder Jordon Ibe, 19, an England debut just to keep him from playing for Nigeria. (Sunday People)

Bayern Munich are among the clubs watching Birmingham's England Under-20 international winger Demarai Gray, 19. (The People)

Ex-Man United striker Andrew Cole was deeply impressed by the impact made by Martial in his debut for the Red Devils. 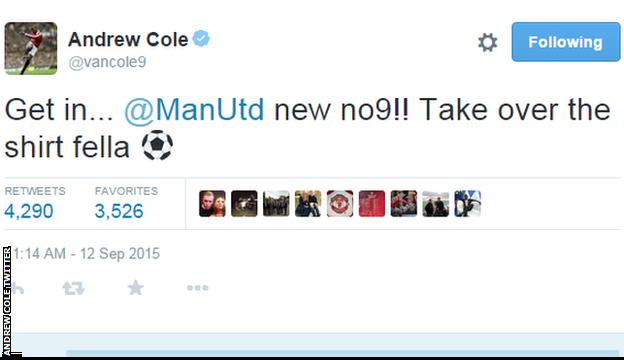 Jose Mourinho evaded a question about Everton defender John Stones, a summer transfer target for the Stamford Bridge club, by cutting short his pre-match television interview before his side's loss to the Toffees. (Independent)

Arsenal and Everton were among a number of clubs who showed their support for refugees caught up in the current crisis in Syria by unveiling 'refugees welcome' banners at their home games on Saturday.(Daily Mirror)