After opening talks about a new contract, Manchester United goalkeeper David De Gea, 24, is poised to see his income rise to £200,000 a week.(Mirror)

QPR striker Charlie Austin, 26, says there was no truth in reports linking him with a summer move to Manchester United.(Talksport)

Former Liverpool midfielder Steven Gerrard, 35, says he would have stayed at the Reds had they offered him the right job.(Mail)

Chelsea goalkeeper Thibaut Courtois, 23, is set for an extended spell on the sidelines after injuring a knee in training.(Evening Standard)

Some Manchester United players are unhappy with the club's performance analyst, as they think they spend too much time reviewing videos.(Mail)

Many United players were also angered by manager Louis van Gaal's treatment of Rafael. The 25-year-old Brazilian defender was sold to Lyon in August.(Telegraph)

England international Shaw says he read too much into the criticism and his form suffered as a result.(Star)

Barcelona forward Neymar, 23, is to open contract talks with Barcelona over doubling his salary after being linked with a move to Old Trafford. (Mirror)

Former Liverpool winger Steve McManaman feels both the Reds and Manchester United have "lost their identity" as the two sides prepare to meet in the Premier League on Saturday. (Independent)

Manchester United striker James Wilson, 19, will be sent out on loan next week, with 14 Championship clubs keen to sign him. (Telegraph)

Derby manager Paul Clement says his club are interested in signing the England Under-21 international, describing the move as "a possibility but not a certainty". (Guardian)

Manchester City midfielder Fernando, 28, is pain-free for the first time in about a year as he nears full fitness from a groin injury. (Manchester Evening News)

Toffees boss Roberto Martinez says he holds no grudge against Blues counterpart Jose Mourinho over the pursuit of the England defender.(Guardian)

Aston Villa manager Tim Sherwood has likened midfielder Idrissa Gana, 25, to a robot, saying "when you cut him wires come out of him."(Star)

Swansea manager Garry Monk says Ashley Williams, 31, is one of the best defenders in the Premier League.(South Wales Evening Post)

Sunderland striker Fabio Borini, 24, admits he had a "very difficult time" at Liverpool and feels "good to be back" at the Stadium of Light.(Sunderland Echo)

Black Cats manger Dick Advocaat feels he has brought in enough quality to see the club rise from the bottom of the Premier League.(Mirror)

West Brom director of football Richard Garlick has called for the club to recruit lower-league players at a younger age to give them more time to become ready for the Premier League.(Birmingham Mail)

Leicester City have taken full-back Dwight Tiendalli, 29, on trial after the Dutchman was released by Swansea on transfer deadline day.(Leicester Mercury)

Stoke captain Ryan Shawcross, 27, has started jogging and swimming as he looks to recover from back surgery.(Stoke Sentinel)

Bournemouth manager Eddie Howe says there is no animosity between the Cherries and Norwich following their reported pursuit of 27-year-old striker Lewis Grabban. (Bournemouth Echo)

Watford manager Quique Sanchez Flores says striker Matej Vydra, 23, went out on loan because he did not adapt to the Spaniard's style of play.(Watford Observer)

Norwich striker Ricky van Wolfswinkel, 26, is aiming to resurrect his career while on loan at La Liga side Real Betis.(Norwich Evening News)

Brighton manager Chris Hughton is surprised by the club's strong start to the season, winning four out of five games to sit top of the Championship.(Sky Sports)

Chelsea midfielder Cesc Fabregas was in nostalgic mood on Thursday, posting this photo of his time at Barcelona, where Man Utd boss Louis van Gaal was manager between 1997 and 2000.

It looks like Leicester winger Jeffrey Schlupp's favourite meal is rice after getting a packed lunch when visiting his mum and sister. "I'm not leaving empty handed," he wrote on Twitter.

Arsenal defender Calum Chambers gave his best wishes to team-mate Laurent Koscielny, who was celebrating his 30th birthday on Thursday. 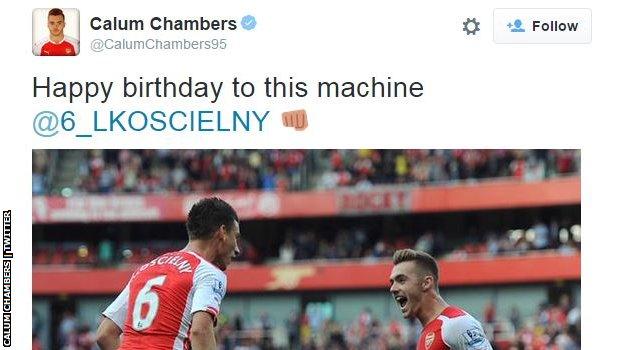 New Tottenham signing Son Heung-Min has been told by club officials he can't buy a red car - because of the team's rivalry with Arsenal. (Korea Joongang Daily)

The Gunners will donate £1 from every ticket sold for their Premier League game against Stoke City to help with the refugee crisis. (Arsenal.com)