Arsenal could land Real Madrid striker Karim Benzema, 27, if they make a £50m bid for the France striker. (Daily Star)

Barcelona forward Neymar would consider a move to Manchester United, although the Old Trafford club are set to have to wait until next summer to sign the 23-year-old. (Guardian)

However, Neymar's agent has dismissed speculation linking the Brazil international with a move to Manchester. (GloboEsporte - in Portuguese)

United are also still interested in signing 26-year-old forward Gareth Bale from Real Madrid, but they do not expect to complete that transfer this year either. (Sky Sports)

AC Milan chief executive Adriano Galliani says the Serie A side are in talks with Liverpool over a loan move for 25-year-old striker Mario Balotelli. (Daily Mail via Mediaset Premium)

Juventus are on the verge of signing 27-year-old Chelsea winger Juan Cuadrado on a season-long loan, according to the Italian club's chief executive Giuseppe Marotta. (Sport Mediaset)

West Brom manager Tony Pulis says 15 clubs are interested in signing Saido Berahino after the Baggies boss dropped the 22-year-old for the game against Chelsea on Sunday. (Evening Standard)

Tottenham are set to make a new £20m bid for the striker, having seen an offer of £15m rejected last week. (Telegraph)

Spurs are also interested in signing Southampton midfielder Victor Wanyama, but Saints are refusing to sell the 24-year-old so close to the end of the transfer window. (Mail)

Stoke manager Mark Hughes has warned Norwich target Jonathan Walters, 31, that the Potters may keep the forward until his contract runs out next summer. (Daily Mirror)

Arsenal boss Arsene Wenger says he is ready to take a "gamble" in the transfer market but only for the right players. (Evening Standard)

Leeds are hoping to complete the signing of Watford striker Fernando Forestieri, 25, this week after agreeing a fee of around £3m. (Daily Mirror)

Manchester City goalkeeper Joe Hart is refusing to get carried away by the team's impressive start to the season. (Manchester Evening News) 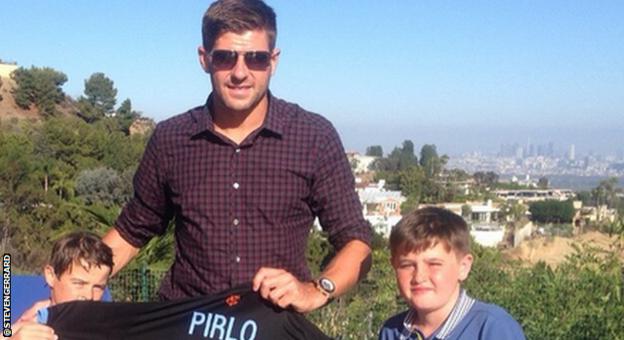 Following LA Galaxy's 5-1 win over New York City in the MLS on Sunday, ex-Liverpool captain Steven Gerrard grabbed New York midfielder Andrea Pirlo's shirt as a memento. "Fantastic player always a pleasure to share a pitch with this man," he posted on Instagram.

Actor David Hasselhoff seems to be a fan of Yaya Toure judging by a tweet from the Manchester City midfielder following the side's win over Everton on Sunday.

Chelsea manager Jose Mourinho said Pedro's debut for the club in the win at West Brom was good but "wasn't quite Maradona". (Goal.com)