Real Madrid president Florentino Perez will have talks with Ramos, who has verbally agreed on a salary with United were he to move to Old Trafford. (AS.com)

Chelsea manager Jose Mourinho has conceded that his club may have to pay extraordinary money for Everton's 21-year-old centre-back John Stones.(Daily Mail)

Paris St-Germain have stepped up efforts to sign winger Angel Di Maria, 27, before the Argentine flies to the United States to begin his pre-season preparations. (Telegraph)

Meanwhile, Liverpool are waiting for offers for strikers Rickie Lambert, 33, and Fabio Borini, 24, as Benteke prepares to complete his move to Anfield.(Independent)

Manchester United's Danish goalkeeper Anders Lindegaard, 31, will see out the remaining year of his contract, despite the imminent arrival of Argentina international Sergio Romero. (Daily Star)

Newcastle United have not written off their hopes of signing Marseille winger Florian Thauvin, 22, this summer. (Newcastle Chronicle)

The Hammers could also move for veteran midfielder Esteban Cambiasso, 35, who has announced he will not be accepting Leicester City's offer of a new contract. (Mirror)

Roma are in talks with Arsenal's Polish goalkeeper Wojciech Szczesny, 25, over a one-year loan move, with a view to a permanent deal. (Talksport)

The Gunners look like missing out on forward Julian Draxler, 21, after Juventus made a bid of around £17.5m to Schalke for the German. (Goal.com)

Tottenham have made a bid of £7m for Lyon's 21-year-old forward Clinton N'Jie who scored eight goals for the French side last season. (Daily Star)

Middle East side Al Ahli have offered £6m to Swansea for 29-year-old striker Bafetimbi Gomis and could offer the Frenchman a hefty contract. (Daily Mirror)

Sunderland's recruitment of defender Younes Kaboul, 29, and 27-year-old midfielder Jeremain Lens has given the Black Cats' dressing room a lift, according to midfielder Seb Larsson.(Sunderland Echo)

Manchester United's Marouane Fellaini apologised to manager Louis van Gaal for his sending off on the final day of last season which will see the midfielder, 27, miss the first three Premier League games of next season. (Express)

Manager Eddie Howe says he is in the market for further additions to his Bournemouth squad - on top of the seven new faces brought into the club so far this summer. (Bournemouth Echo)

Queens Park Rangers goalkeeper Alex McCarthy, 25, is thought to be on the brink of a move to Crystal Palace after being pictured in London with the Eagles' head of sports medicine, Zafar Iqbal.(Croydon Advertiser)

Liverpool striker Mario Balotelli felt the wrath of his own fans after supporting former team-mate Raheem Sterling, who scored on his debut for Manchester City. The Italian tweeted: "Liverpool fans are amazing but I hope @sterling31 will play at his best because he deserves it. He is a good guy young and talented. Support him like you always did. He gave everything to this club and respect it so I am sad to see this. YNWA, Liverpool is a family ALWAYS."

Argentine midfielder Esteban Cambiasso posted a thank you message on his official Facebook page after he decided not to stay at Leicester City. He said: "I would like to thank all the fans who last season made me feel proud to be part of a club with an unforgettable spirit and energy.

"And a very special thanks to all my team mates, staff and every people of the club, with whom I have lived one of the most important years of my career, crowned with the remaining Premier League status." 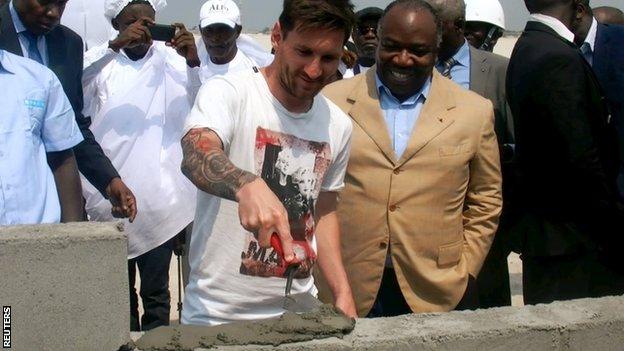 Barcelona forward Lionel Messi received at least £2.4m in cash to lay a stone at a 2017 Africa Cup of Nations stadium in Gabon. (France Football - in French)

Young striker Julio Rey, 20, saw a dream transfer to Spanish side Deportivo La Coruna fall through after the club discovered he abused them on Twitter three years ago. (Metro)