Manchester City are hoping to complete a £50m deal for Liverpool's England winger Raheem Sterling, 20, in time to take him on tour to Australia.(Daily Star)

Belgium striker Christian Benteke, 24, who has been linked with a move to Liverpool, will tell Aston Villa he wants to leave the club this summer when he returns for pre-season training.(Guardian)

Arsenal forward Alexis Sanchez, 26, will miss the start of the new season after helping Chile to win Copa America. (Telegraph)

Real Madrid's Iker Casillas, 34, is interested in a move to Porto after a formal bid for the Spain goalkeeper was submitted by last season's runners-up in the Portuguese League. (Guardian)

News of Casillas's possible departure has increased fears at Manchester United that Real will move to replace him with his 24-year-old compatriot David De Gea. (Sun - subscription required)

Sunderland and Middlesbrough are battling for West Ham winger Stewart Downing, 30, after the Black Cats had a £5m deal rejected.(Daily Mail)

Arsenal captain Mikel Arteta, 33, has finally signed a one-year contract - months after the Spanish midfielder verbally agreed a deal with the Gunners.(Daily Mirror)

Manchester United are ready to listen to offers for Brazilian right-back Rafael da Silva, 24, who may move to a club in Italy.(Sky Sports)

Bolton boss Neil Lennon is keen on the vacant manager's job at Leicester but the Foxes' owners want a bigger name. (Daily Mirror)

Liverpool forward Mario Balotelli, 24, was allowed to miss the start of pre-season training after being granted compassionate leave.(Telegraph)

Liverpool and Burnley are heading for a tribunal to determine a fee for England Under-21 striker Danny Ings, 22, with the two clubs unable to reach an agreement. (Times - subscription required)

Chelsea manager Jose Mourinho, 52, has turned down a pay rise at Stamford Bridge because he is so keen to remain with the Premier League champions. (Sun - subscription required)

Manchester United were among the Premier League clubs to be back in pre-season training on Monday and it appears new £31m signing Memphis Depay has already made a positive impression. Red Devils defender Luke Shaw tweeted: "Good session back with all the lads today and good to be training with Memphis for the first time!" 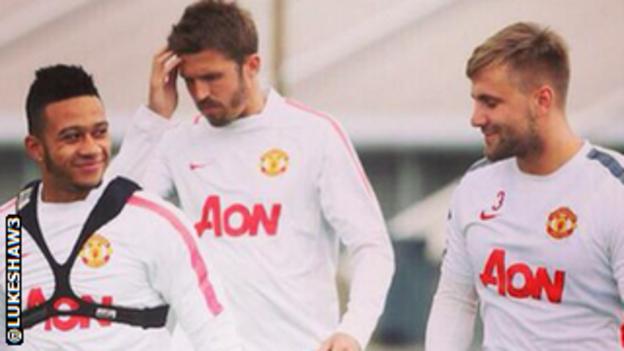 Spurs striker Roberto Soldado hopes he will benefit from new contracts for team-mates Nabil Bentaleb and Harry Winks. Soldado tweeted he hoped he would be invited for a meal by his colleagues. And it appears he may not be disappointed, with Bentaleb replying: "Thanks Robby you have a daily invitation my friend."

Rio Ferdinand is impressed with Barcelona's latest bit of transfer business. The ex-England defender tweeted: "Turan to @FCBarcelona - @realmadrid better come with someone to trump that because Barca just reinforced an already top midfield..."

Micronesia were thrashed 46-0 by Vanuatu in their latest game in an Olympic qualifying tournament - and now have a goal difference of -114. (Fox Sports)

It appears Titi Ameobi - the sister of Newcastle forward Sammy, 23 - has broken news of his move to Cardiff City through a social media posting. (Wales Online)

Sherwood Bear is making a comeback as the official mascot of Nottingham Forest. (Nottingham Post)