Vieira is competing with former Derby County boss Steve McClaren for the job, with Newcastle hoping to "complete the process" of making an appointment by the end of the week. (Daily Telegraph)

Former Manchester United loan signing Radamel Falcao, 29, is having talks with Chelsea about a move from Monaco and is willing to take a pay cut to make the switch happen.(Daily Mirror)

Liverpool will have talks with Burnley forward Danny Ings, 23, this week.(Independent)

And the Reds are being linked with a shock move for 30-year-old Cardiff City goalkeeper David Marshall. (Wales Online)

The imminent arrival of Rafael Benitez as manager of Real Madrid has once again put Liverpool forward Raheem Sterling, 20, in the transfer spotlight (Marca)

Winger Theo Walcott, 26, is confident his Arsenal future will be resolved but says "it will take time". (Independent)

Goalkeeper Hugo Lloris, 28, does not want to move from Tottenham, says his manager Mauricio Pochettino.(Daily Star)

Aston Villa are prepared to break the current ceiling on wages at the club and offer striker Christian Benteke, 24, a new contract worth £75,000-a-week. (Daily Mail)

Dundee offer Hibernian loanee Martin Boyle a one-year extension to his contract at Dens Park, although Hibs are interested in making the 22-year-old striker a permanent member of their squad.(Edinburgh Evening News)

Aston Villa goalkeeper Brad Guzan, 30, has been recalled to the USA squad for friendlies against the Netherlands and World champions Germany.(NBC)

Manchester United midfielder Marouane Fellaini claims he was misquoted by French media, who reported that he said Angel Di Maria would be a good signing for Paris St-Germain.

Inter beat Empoli 4-3, while The Times have stated the Arsenal striker might be heading to Galatasaray. 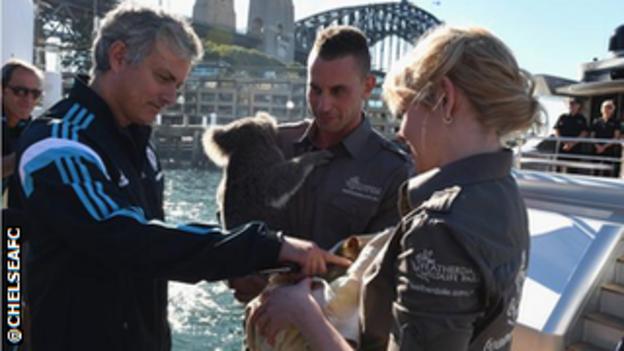 Premier League champions Chelsea have posted a string of photographs during the club's post-season tour of Australia, including one with manager Jose Mourinho stroking a koala bear (left).

Robin van Persie and Darren Fletcher spent their Sunday watching their sons play football... for Manchester City. The Manchester United striker and former Old Trafford midfielder were watching their offspring play in a youth tournament in the Netherlands organised by Van Persie.