Chelsea and Manchester United have been joined by Juventus in their pursuit of Inter Milan striker Mauro Icardi, 21, with the Italian giants ready to make a bid. (Daily Express)

West Ham United hope to tie up a deal for Brazilian winger Anderson Luiz de Carvalho, 33, better known as Nene, who is a free agent after cancelling his contract with Qatar club Al Gharafa. (Daily Mail)

Southport teenager Drew Lewis, 19, has been offered a trial with Manchester United after scoring 38 goals for the Conference side's reserves this season. (Daily Mail)

Palermo president Maurizio Zamparini says that no Italian club has the money to prize away 21-year-old striker Paulo Dybala and that could leave the way clear for Manchester City to step in. (Talksport)

Paris St-Germain have not given up hope of signing Chelsea's Eden Hazard, 24, despite the fact the Belgian forward signed a new five-year contract at Stamford Bridge last week. (Daily Star)

Everton boss Roberto Martinez admits forward Christian Atsu, 23, has struggled to adapt to the demands of the Premier League but will keep faith with the Chelsea loan signing. (Daily Express)

Sunderland boss Gus Poyet has been told his immediate future is safe but there is growing concern over his deteriorating relationship with disgruntled supporters.(Daily Telegraph)

Poyet insists three points against West Brom at the Stadium of Light on Saturday is the only way for Sunderland to make amends for their FA Cup defeat at League One side Bradford City. (Sunderland Echo)

Former Chelsea defender David Luiz, 27, who moved to Paris St-Germain for £40m last summer, believes he has already proved value for money and is now worth more than £50m. (London Evening Standard)

Southampton striker Jay Rodriguez, 25, out of action for almost a year with a cruciate ligament injury, is hoping to return to action in March. (Daily Mail)

England manager Roy Hodgson has confirmed that Tottenham's 23-goal striker Harry Kane, 21, will be named in his next squad. (Daily Mail)

Everton midfielder Leon Osman, 33, is expected to continue his recovery from a foot injury with a run out for the club's Under-21s on Tuesday after 11 weeks out. (Liverpool Echo)

Southampton chairman Ralph Krueger says his side, who are currently fourth in the Premier League and in line for a place in the Champions League, are fully prepared to play on world club football's most elite stage. (Southampton Echo)

Swansea City supporters trust are expecting an offer from US billionaire John Moores to take a 30% stake in the club. (South Wales Evening Post)

Chelsea manager Jose Mourinho, who pits his side against Paris St-Germain on Tuesday, has revealed he was offered the chance to take charge at the French club in 2011 and 2013 but chose to return to Stamford Bridge. (Daily Mirror)

Chelsea defender Cesar Azpilicueta tweeted a picture of himself and Cesc Fabregas (below) in their final training session before travelling to take on Paris St-Germain in the Champions League on Tuesday. 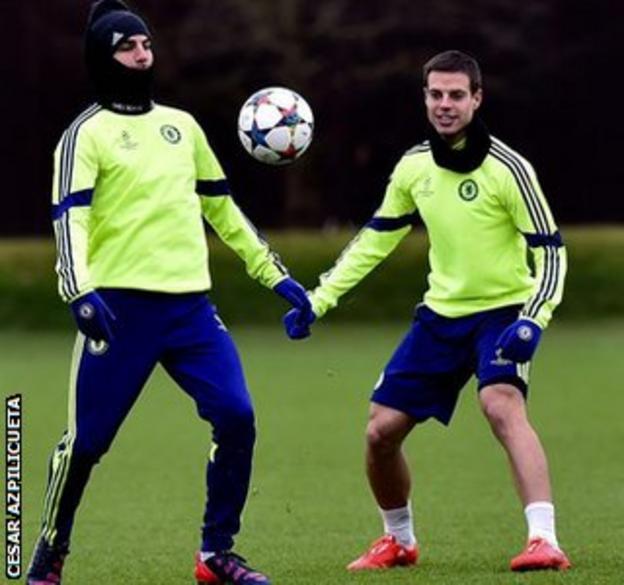 Former Southampton forward Matt le Tissier says Manchester United captain Wayne Rooney took a dive for the penalty which helped the Old Trafford club to a 3-1 FA Cup win at Preston. He tweeted: "It was entirely feasible to have stayed on his feet and avoid the poor challenge from the keeper. He chose to dive and conned the ref."

Newcastle winger Jonas Gutierrez, who survived his battle with cancer, sent his best wishes to Wigan defender Juan Carlos Garcia, who has just been diagnosed with leukaemia. "Hope he gets a quick recovery. The best for him and his family," he tweeted.

It is Pancake Tuesday, so that means it is Ash Wednesday tomorrow and the occasion is not lost on Burnley full-back Steven Reid who tweets: "Lent starting this week - no crisps, sweets, chocolate, biscuits, ice cream, cake .. basically everything nice."

Barcelona could face punishment from La Liga after a section of their supporters ridiculed Real Madrid star Cristiano Ronaldo by chanting "Ronaldo is a drunk" at the game against Levante at the Nou Camp. (Daily Mail)

Chelsea fans might see more artistry on the pitch than they bargained for on Tuesday as Paris St-Germain striker Zlatan Ibrahimovic, 33, reveals he has had the names of the 50 people closest to him temporarily tattooed on his upper body as part of an initiative for the United Nations World Food Programme.(Daily Mail)