Real Madrid boss Carlo Ancelotti has hinted that defender Sergio Ramos, 28, who is reportedly wanted by Manchester United, Arsenal, Chelsea and Manchester City, is on the verge of signing a new deal at the Bernabeu. (Daily Star)

Manchester United goalkeeper David De Gea's agent has hinted that the 24-year-old Spaniard could move to Real Madrid in the summer. (Sun - subscription only)

Aston Villa are ready to sell England midfielder Fabian Delph to prevent him leaving for free in the summer at the end of his contract, but want £4m for the 25-year-old, who has interested Tottenham and Liverpool. (Daily Mirror)

Chelsea have approached Shakhtar Donetsk over the availability of their Brazilian midfielder Douglas Costa, 24. (The Guardian)

West Brom are keen on signing winger Bakary Sako, 26, from Black Country rivals Wolves in what would be the first player to make the switch since Paul Edwards 21 years ago. (Birmingham Mail)

Liverpool have received a boost in their pursuit of Paris St-Germain striker Ezequiel Lavezzi, 29, with the French champions ready to let him leave this month. (Metro)

Arsenal are keen to sign Real Madrid midfielder Asier Illarramendi, 24, in the summer, but the Spanish giants want to recoup most of the £24m they paid Real Sociedad for his services in 2013. (Marca - in Spanish)

But Real Madrid boss Carlo Ancelotti has seemingly ended Arsenal's hopes of signing him after insisting Illarramendi remains part of his plans. (Metro)

Cristiano Ronaldo joined Manchester United and not Arsenal because of the cost of building the Emirates stadium meant they could not afford him, according to a new biography of the Portuguese superstar's agent, Jorge Mendes. (Daily Telegraph)

Juventus midfielder Paul Pogba, 21, has dropped a hint he could be heading for Real Madrid rather than Manchester United or Chelsea by revealing he is learning Spanish. (Daily Express)

West Ham midfielder Ravel Morrison, 21, is considering offers to move overseas when his contract expires at the end of the season. (Guardian)

Former Liverpool striker Emile Heskey, 37, returning to Anfield for the FA Cup fourth-round tie with Bolton, says he was surprised by Steven Gerrard's decision to leave in the summer and feels the former England captain "probably had another year or two in the Premier League." (Daily Telegraph)

Aston Villa boss Paul Lambert has fined winger Jack Grealish, 19, for posting a message on Twitter reading: "Can't wait to be happy playing football again," alongside a photo of himself smiling while on loan at Notts County last season. (Daily Mail)

Manchester City boss Manuel Pellegrini says he does not take the FA Cup lightly despite arriving back from warm weather training in Abu Dhabi just 24 hours before their FA Cup fourth-round tie with Middlesbrough on Saturday. (Daily Telegraph)

Joyonline, a Ghanaian website, described Asamoah Gyan's last-minute winner as "priceless" - but the first half as "dry and boring".

But Senegal's Walfadjri said South Africa were "quick and superb on all fronts". 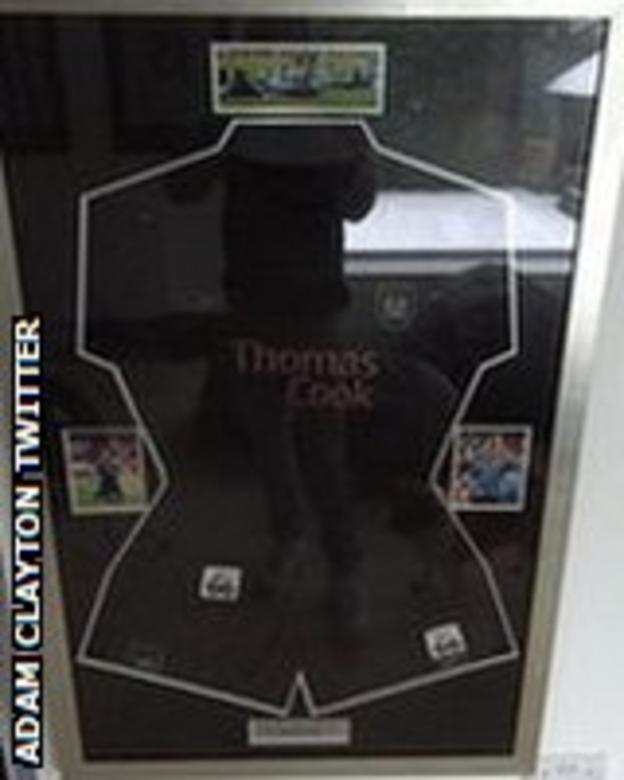 Middlesbrough midfielder Adam Clayton, 26, returns to his first club Manchester City in Saturday's FA Cup fourth round and tweets an image of his first professional training kit, which he has had framed.

Daniel Sturridge's goal celebration has seemingly left its mark on some of the Arsenal players after midfielder Jack Wilshere, 23, attempted to copy the Liverpool striker's arm-waving jig on Arsenal's official Instagram account while doing a Q&A.

Bradford City midfielder Billy Knott, 22, is so desperate to get his hands on John Terry's shirt in their FA Cup clash at Stamford Bridge on Saturday that the former Blues' trainee has contacted ex-team-mate Josh McEachran and asked him to speak to Terry to see if he will give him his shirt at the final whistle. (Daily Star)

Police have been called to Manchester City's training ground 31 times in five years for incidents that include youths spotted with a javelin. (Daily Mail)

Sussex County League Division Two side Seaford Town, the only team in the top 10 tiers of English football to score fewer goals than Aston Villa, have challenged the Premier League outfit to a match to decide the most boring team in the country. (Sun - subscription required)