Leicester City have had a £7m bid rejected for Croatia striker Andrej Kramaric, 23, who is also wanted by Chelsea and Tottenham. (Daily Express)

Arsenal had hoped 22-year-old midfielder Jack Wilshere would be back from an ankle injury in late January, but they will receive a setback with the news he will now be out until March. (Sun - subscription required) 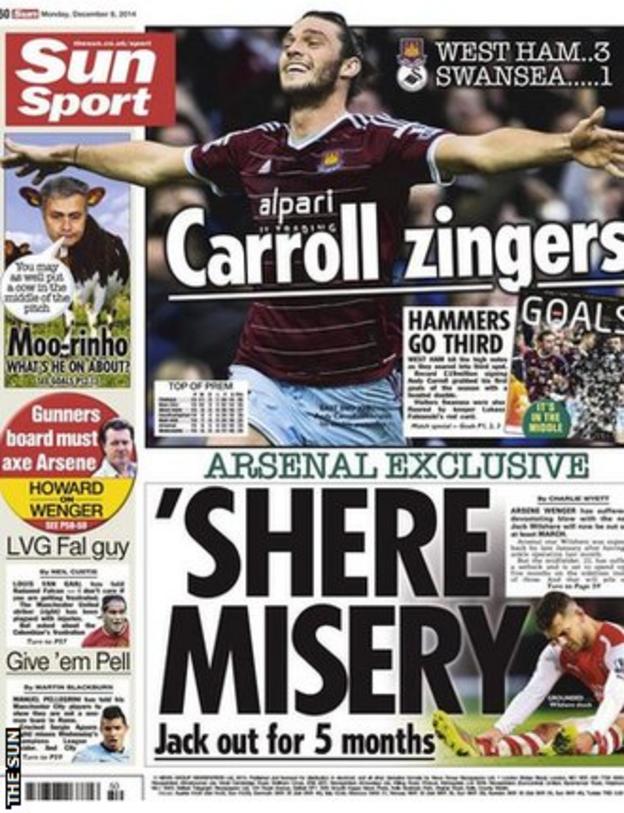 West Brom goalkeeper Ben Foster says the club's players are "battling" to keep manager Alan Irvine, who has come under pressure after one point from the last five games, in his job. (Daily Star)

Southampton boss Ronald Koeman will face Manchester United counterpart Louis Van Gaal when their teams meet on Monday and the fixture will see the resumption of a feud between the two Dutchmen. (Telegraph)

Switzerland is set to bring in a new law which would allow them to prosecute those guilty of corruption, including members of world football's governing body Fifa whose headquarters are based in the country. (Times - subscription required)

Former Newcastle United midfielder Nolberto Solano, 39, wants to prove himself as a manager in English or Scottish football, and the Peruvian has targeted vacancies at Motherwell and Hartlepool United. (Daily Mail)

Crystal Palace winger Yannick Bolasie, 25, says his "360 and a flick" piece of skill in the 0-0 draw with Tottenham was inspired by Ronaldinho. (Daily Mirror)

Andy Carroll insists there is no reason why West Ham cannot be competing in Europe next year, after his two goals in the 3-1 win over Swansea lifted them to third in the Premier League to continue their impressive start to the season. (Talksport)

Manchester City are hopeful Sergio Aguero will be out for no longer than a month after their 19-goal top scorer suffered suspected knee ligament damage in the 1-0 victory over Everton. The 26-year-old will discover the extent of the injury in the next couple of days after scans. (Guardian)

And then there were two. Match of the Day presenter Gary Lineker feels it is down to a straight fight between Lionel Messi, 27, and Cristiano Ronaldo, 29, for the Ballon d'Or. He tweeted: "A hat-trick for Messi. A hat-trick for Ronaldo. No goals for Neuer. The Ballon d'Or is a 2 horse race."

Hatem Ben Arfa has not had the happiest of loan spells at the KC Stadium, but the 27-year-old Newcastle midfielder has used Instagram to deny a rift with Hull manager Steve Bruce. (In French)

Arsenal supporters booed manager Arsene Wenger as he boarded a train at Stoke following his side's 3-2 defeat at the Britannia Stadium. (Guardian)

Stoke striker Peter Crouch, 33, celebrated scoring in the 3-2 win over Wenger's side by crowd-surfing at a Kasabian concert. (NME)