Chelsea and Manchester City are set to go head to head for the signature of Atletico Madrid midfielder Koke, with both clubs prepared to meet the 22-year-old's £48m release clause. (Sunday Express)

Barcelona defender Gerard Pique, 27, has scotched talk of a move to Manchester United by reaffirming his commitment to the Catalan club. (Mail on Sunday)

Forward Lukas Podolski, 29, looks set to leave Arsenal in January after bemoaning his lack of first-team opportunities at the Emirates. (Evening Standard)

Everton are lining up a move for Arsenal misfit Joel Campbell, 22, and are prepared to pay £7m for the Costa Rica striker. (Sun on Sunday - subscription required) 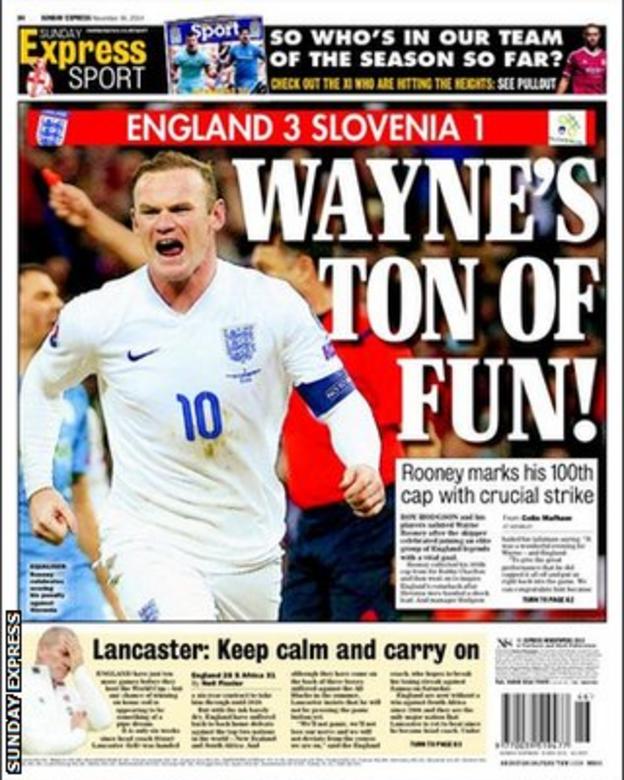 Roma striker Mattia Destro, 23, has welcomed rumours linking him with a move to Arsenal. (Evening Standard)

Blackburn goalkeeper Paul Robinson, 35, is eyeing a January move after admitting his career at Ewood Park is over. (Talksport)

Liverpool striker Mario Balotelli, 24, will not be returning to former club Inter Milan in January after Roberto Mancini ruled out a move. (Goal.com)

Liverpool are considering whether to sack manager Brendan Rodgers after an underwhelming start to the season. (Metro)

Rooney has also pledged that he will never retire from international football. (Sunday Telegraph)

An official of the England 2018 bid claims the £35,000 spent on a gala dinner was approved by Fifa, despite world football's governing body criticising the payment in it World Cup bidding report. (Sunday Telegraph)

Newcastle midfielder Jonas Gutierrez has shared photos of his new tattoo marking his battle against cancer on Twitter.

Wayne Rooney has predicted his son Klay could follow in his footsteps and says the youngster already has 'unbelievable technique'. (Sunday Mirror)