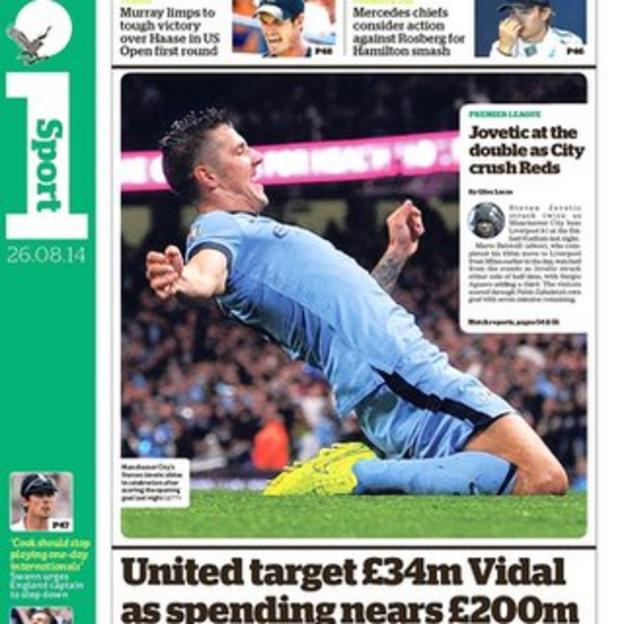 United could use the Italian club's interest in striker Javier Hernandez, 26, to help secure a deal for Vidal. (Daily Express)

Manchester United will follow up their move for Angel Di Maria by signing Netherlands utility player Daley Blind, 24, from Ajax for £18m in the next few days. (Sun - subscription required)

Arsenal look set to be beaten to the signing of Olympiacos centre-back Kostas Manolas by Roma after the Italian club had a £10.3m offer accepted for the 23-year-old Greece international. (Goal)

The Gunners have made enquires about Torino forward Alessio Cerci, 27, but face stiff competition from Southampton for his signature.(Daily Mail)

Manchester United and Arsenal have received a huge boost in their pursuit of Roma defender Mehdi Benatia, 27, after the Italian club scrapped a proposed meeting with potential suitors Bayern Munich.(Daily Star)

The Gunners could move for either Manchester United's Danny Welbeck, 23, or QPR's Loic Remy, 27, as they fear France striker Olivier Giroud could be out for three months with an ankle injury.(Daily Telegraph)

Southampton have made a move for Atletico Madrid defender Toby Alderweireld and hope to beat Monaco to a deal for the 25-year-old Belgium international.(Times - subscription required)

Chelsea are in talks to sign Mattia Destro, 23, according to the Roma forward's agent.(Daily Star)

Bournemouth are keen to sign West Ham striker Carlton Cole for £1m but the 30-year-old does not want to drop into the Championship.(Daily Mirror)

Wolves are closing in on the signing of Chelsea midfielder George Saville, 21.(Express and Star)

Hull have not given up hope of signing striker Jordan Rhodes, 24, even though Blackburn insist their key player is not for sale.(Hull Daily Mail)

Scotland international Rhodes is considering putting in a transfer request in order to force through a move to the KC Stadium.(Daily Mail)

Celtic target Stefan Scepovic, the 24-year-old defender with Spanish second-tier side Sporting Gijon, has asked to train alone ahead of a proposed £3m move to Parkhead.(Daily Record)

Midfielder Adam Forshaw is set to complete his move to Wigan this week after Brentford accepted a third offer from the Latics for the 22-year-old.(Get West London)

Wigan have turned down a £5m bid from Leicester City for midfielder James McArthur, 26, but the Championship side's chairman Dave Whelan has indicated he may sell if Leicester offer more.(Daily Telegraph)

England winger Andros Townsend, 23, could be left on the fringes at Tottenham, with a move away dependent on Southampton allowing midfielder Morgan Schneiderlin, 24, to move on.(Guardian)

United boss Louis van Gaal is hoping Di Maria will be as successful a signing for him as winger Arjen Robben, 30, who he took from Real Madrid to Bayern Munich in 2010.(Manchester Evening News)

South Korea international midfielder Ki Sung-yueng, 25, has opened talks over a new deal at Swansea and insists: "It would be great to stay here."(South Wales Evening Post)

Former West Brom defender Darren Moore is to return to the club as a youth coach.(Birmingham Mail)

Goalkeeper Julian Speroni, 35, says Crystal Palace must keep caretaker boss Keith Millen even if he is not handed the job on a permanent basis.(London Evening Standard)

Match of the Day host Gary Lineker, in Germany for the Sport Bild awards, tweeted of Manchester City's 3-1 win over Liverpool: "Seeing the result from afar, it seems Liverpool could do with someone like Balotelli."

Tottenham chairman Daniel Levy displayed a rarely seen sense of fun, captured by the club's Twitter feed, by taking part in the Ice Bucket Challenge, having been nominated by one of the managers he sacked - Andre Villas-Boas - and nominates Real Madrid president Florentino Perez next.

Midfielder Gareth Bale must feel at home now at Real Madrid after the La Liga giants unveiled their new Champions League kit that includes a dragon on the jersey.(Metro)

Goalkeeper Petr Cech is clearly using his time on Chelsea's bench to work on his Twitter comeback skills - after trolling a Manchester United fan who asked him about Thibaut Courtois.(Metro)