Brazil coach Luiz Felipe Scolari says Neymar, 22, feared he was paralysed when the Barcelona forward sustained the back injury that ended his World Cup. Guardian

Netherlands winger Arjen Robben, 30, says he is tired of people criticising him after he admitted diving during the last-16 win against Mexico. Daily Mail

Netherlands keeper Tim Krul came on specifically for his country's penalty shootout win over Costa Rica and his former Newcastle manager - Glenn Roeder - says the 26-year-old is not averse to taking a spot-kick as well as saving them. Daily Express

Krul came on for 25-year-old Jasper Cillessen, who says he was not told about Dutch coach Louis van Gaal's decision to replace him for the penalty shootout and was "angry" at the decision. Daily Telegraph

Manchester United and Belgium midfielder Marouane Fellaini, 26, is determined to stay at the club and prove his worth to Netherlands boss Louis van Gaal, who will take over at Old Trafford following his country's World Cup campaign. Manchester Evening News

West Brom are weighing up whether to try to sign right-back Alan Hutton, 29, from Midlands rivals Aston Villa. Birmingham Mail

Arsenal defender Thomas Vermaelen, 28, who has been heavily linked with a move to Manchester United, says he does not know where he will be playing next season. Evening Standard 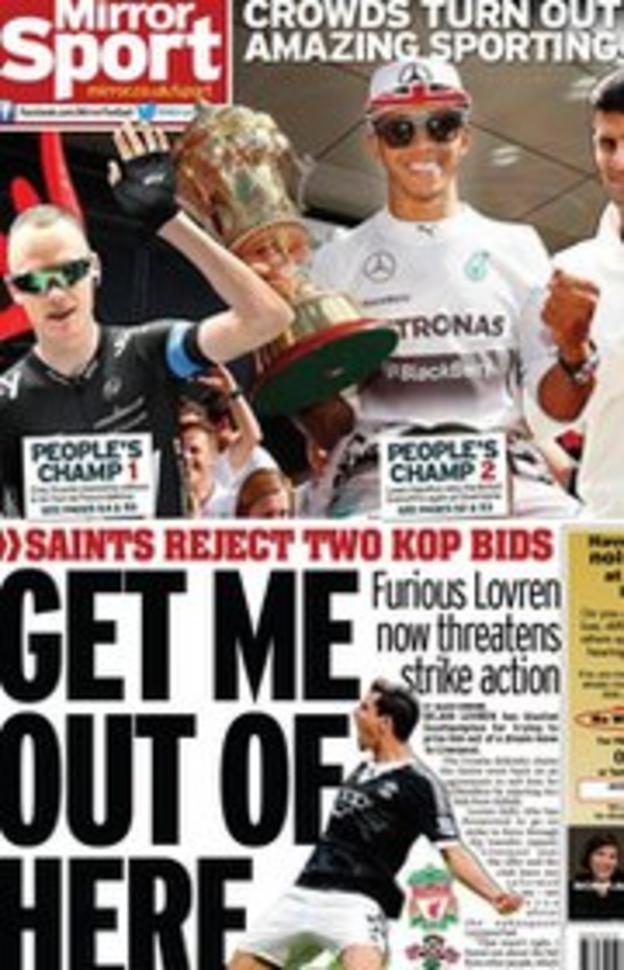 The Gunners have agreed a £34m fee for Sanchez, but Barcelona are waiting to see if Italian club Juventus can match the offer. Liverpool are also interested in the forward but he is not keen on joining the Reds. Daily Mail

Manchester United have been told they must increase their offer for Feyenoord defender Daryl Janmaat, 24. Metro

Belgium striker Romelu Lukaku, 21, says he has a decision to make about his future at Chelsea this summer. Guardian

Monaco are interested in Newcastle's 24-year-old French midfielder Moussa Sissoko, who is also being chased by Liverpool. L'Equipe (in French)

Liverpool are eager to sell Daniel Agger and have offered the 29-year-old defender to Spanish giants Barcelona. Mundodeportivo (in Spanish)

Veteran Colombian goalkeeper Faryd Mondragon, 43, has announced his retirement from football after his country's exit from the World Cup. Bild (in German)

AC Milan owner Silvio Berlusconi is concerned he will not get the right price for Arsenal target Mario Balotelli following the 23-year-old Italian striker's lacklustre performance at the World Cup. Bild

Striker Lukas Podolski, 29, has tweeted a picture of him and some of his Germany team-mates ahead of Tuesday's World Cup semi-final against Brazil. He wrote: "On the way to Belo Horizonte. Just one day left till the 1/2 final!"

Podolski's Germany and Arsenal team-mate, centre-back Per Mertesacker, 29, writes on Facebook: "On the way to Belo Horizonte! The mission of this trip is clear without any doubts."

Belgium striker Divock Origi, 19, believes he will take away some important lessons from Brazil, tweeting: "Proud to be able to represent my country at the World Cup. It was a great learning experience! Thanks."

Brazil defender Dante, 30, is looking forward to the World Cup semi-final against Germany, tweeting: "We trained hard today to play Germany in the Fifa World Cup. We will be ready on Tuesday!"

Colombia celebrated their return home from the World Cup in the same memorable style as they did most of their goals in Brazil. Metro