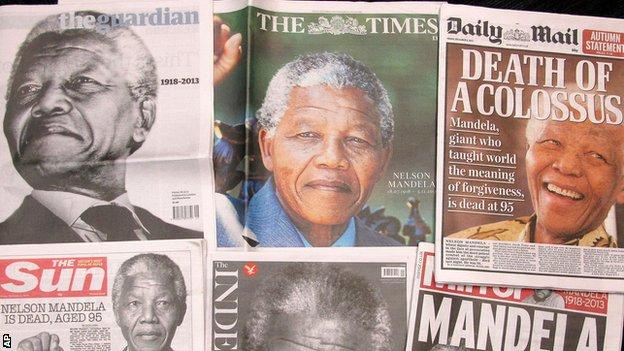 A minute's applause is to be held at Premier League matches in tribute to former South Africa president Nelson Mandela, who died on Thursday aged 95.

Football fans in Scotland will also be asked to applaud at games, with similar plans for Football League and FA Cup second-round matches.

Saracens players will wear black armbands for their Heineken Cup rugby match at Italian side Zebre in Parma.

South Africa's 1995 Rugby World Cup-winning captain Francois Pienaar, who went on to play for Saracens, famously received the Webb Ellis Trophy from Mandela, who wore a Springbok shirt and cap.

"I will always be profoundly grateful for the personal role Nelson Mandela has played in my life, as my president and my example," said Pienaar on Friday.

All clubs playing in this weekend's Heineken Cup and Amlin Challenge Cup third round matches have been asked to observe a minute's silence before kick-off.

A minute's silence was held before the semi-final action started at the UK Snooker Championship in York on Friday afternoon.

The Football League has also asked its clubs to hold a minute's applause ahead of this weekend's games.

"The matches will be preceded by a minute's applause to mark the life and achievements of Nelson Mandela," said a Premier League spokesman.

Liverpool, who host West Ham, will be among the clubs paying tribute on Saturday.

In 1994, the Reds were greeted by Mandela when they went on a tour of South Africa.

"Even as a kid, I didn't have heroes that I would chase for their autograph," former winger John Barnes told the Liverpool website.

"But Mandela was different - he is the only man I have been properly in awe of."

South Africans and world leaders have been paying tribute to Nelson Mandela, who led the transition from white minority rule in his homeland.