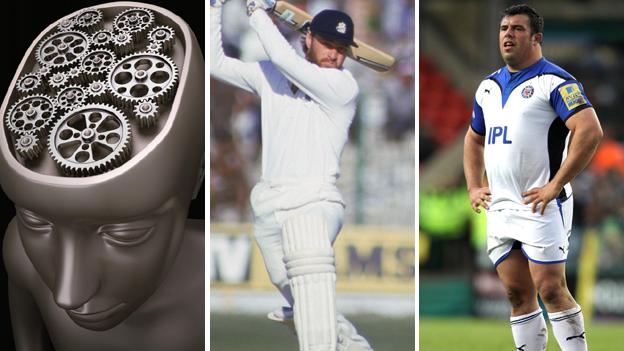 "I only felt pain - being numb was better."

If Graeme Fowler, an English cricketer who scored a century against West Indies when that was something to ring church bells for, was talking about a broken thumb you would not bat an eyelid.

Injuries are occupational hazards in professional sport. Everybody gets them and everybody has to get over them.

But what if this is an injury you cannot see? What if the pain is in your head and you cannot tell anybody about it?

Fowler was one of the most exciting domestic batsmen of the 1980s and never looked like a man in turmoil at the crease, which was more than could usually be said of the national team.

This image of a man without too many cares was seemingly confirmed by his reputation as a dressing-room joker and later as a cheery presence in the BBC broadcasting booth.

But by 2004 his occasional bouts of dark introspection had become serious. He had not left the house for six weeks and was unable to do even the simplest of tasks.

The coping strategies that got him through previous episodes - days spent in front of the television, with the curtains drawn and the phone off the hook - had stopped working, and his family was worried.

He would eventually get help in the form of counselling and "massive medication" - an experience he describes as "like living behind plate glass" - and the 56-year-old now fills his time with media work and coaching at Durham University.

Life after sport - the challenge

From the Professional Players' Federation 2013 study of 1,200 former sportsmen

There is a temptation to take this story and construct a picture of a profession in denial about the size of its problem with mental health.

It is the same thing that happens when people watch Crimewatch and assume crime must be on the up, or when you get a spate of shark attacks in the news. Perceptions about how common something is are influenced by our ability to recall previous examples. Academics call this the "availability heuristic".

Fowler's experiences call to mind the similar cases of England cricketers Marcus Trescothick and Michael Yardy. And from there it is an easy jump to the tragic tales of Robert Enke,Justin Fashanu and Gary Speed, three footballers whose problems ended in suicide.

A good example of this line of reasoning is the theory that cricketers are twice as likely to commit suicide as the average British male. This claim was made by David Frith, the founding editor of Wisden Cricket Monthly, in his 2001 book "Silence of the Heart", a follow-up to his earlier work on the same subject, "By His Own Hand".

Frith's argument, however, had two flaws: he was using an incorrect number for total annual suicides, and his sample size (339 England cricketers) was just not big enough. The truth is that cricketers are no more likely to commit suicide than the rest of us.

Estimates of how common mental health problems are in the UK vary, but a figure of one in four adults experiencing a "diagnosable problem" in any given year is a good benchmark.

The Professional Players' Federation (PPF), an umbrella group for the UK's biggest players' associations, came up with a similar figure from its recent study of 1,200 former professional cricketers, jockeys, footballers and rugby players.

The purpose of the research was to discover how easily former pros made the transition between their sports careers and whatever they do next. The answer was that many find it very hard, particularly in the first two years.

One in three admitted to not feeling in control of their lives, with almost one in four saying they had problems with addiction, depression or money. The report's authors suggested this might underestimate the problem, as some respondents were still unwilling to admit they were struggling.

And that is sport's real problem.

Professional athletes are very probably no more likely to suffer from depression than any of us; they might, though, be slower to ask for help.

With contracts at stake, rivals looking for an edge and fans screaming abuse every time a player goes down without a bone sticking out, keeping quiet and soldiering on is the sensible option.

This is why the majority of those who have admitted to suffering from addiction, anxiety or depression have done so at the end of their careers, or when things have spiralled out of control.

Like Fowler, Bath and England prop Duncan Bell was a popular figure at his club, but perhaps he was at the club too much. His team-mates used to tease him for his "home avoidance".

He must have been doing something right, though, because his performances for Bath earned him an England call-up in 2005 (he had gone on England's tour to Australia in 1998 without playing). He would win his first caps in that year's Six Nations.

However, things were not going so well at home, and a divorce would leave him with little to show for a decade in professional rugby. His moods would change abruptly and he was becoming "obsessed" with things he had seen on TV, or the lyrics of songs he had heard in the car.

But props are tough, right? They don't get affected by lyrics, unless it is to go and thump somebody after belting out a national anthem. And they certainly don't talk about pain unless we can see blood.

Yet Bell could not hide the hurting forever. Bath's club doctor spotted it and urged him to talk to an expert.

This would eventually lead to Bell standing in front of his team-mates in April 2012. He had called the meeting because he wanted them to hear his news first-hand, and not from an interview with The Daily Telegraph a week or so earlier.

With his colleagues arranged in a circle, and his counsellor's camera recording the meeting, Bell started talking. He had been going for 20 minutes before he realised he had not actually told them what the big revelation was: by this stage most of them were expecting him to say he was gay.

Gay, straight, happy, sad - it did not matter. He was among friends and the reaction to his admission that he was being treated for depression was one of support, just as you would expect from true team-mates.

But then you would also expect them to dive out of the way in the game of touch rugby afterwards, shouting "Let Belly through; he'll cry if he doesn't score!"

The 38-year-old - now off medication - can laugh about this now.

"The drugs leave you in a haze, so you live in the middle of your emotions," he said. "That is fine when you're at the bottom, but as soon as I was able to I wanted to get off them. I wanted to feel the love of my children again."

The father-of-four might have put away his gum shield but he is back in rugby as head coach at four-tier side Lydney, is building a new life with his partner Katie and has also started a financial advice business.

What Bell and Fowler both demonstrate is that the real challenge is getting athletes to ask for help in the first place. It is a barrier the PPF and its members are trying to overcome.

When Michael Bennett's career as a winger for the likes of Charlton Athletic, Wimbledon and Brentford was coming to an end, a careers advisor suggested he should become a counsellor. Bennett's reaction was to ask if he meant "councillor".

He is now one of 26 counsellors employed by the Professional Footballers' Association, although he prefers to think of himself as an "active listener". Last season, he listened to 57 members.

Hopefully, this more proactive approach to dealing with problems before they get near the medical interventions that Bell and Fowler needed - or the more extreme cases of Enke, Fashanu and Speed - should normalise what is really a pretty normal situation.

Sportspeople get hurt, like everybody else. But not every injury can be treated with ice and bandages.