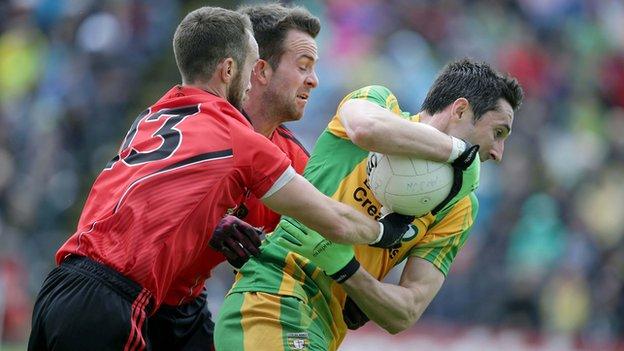 Holders Donegal saw off a determined Down by three points in Sunday's semi-final at Breffni Park to stay on course for a hat-trick of Ulster titles.

The All-Ireland champions, given a sterner test than many expected by James McCartan's men, will play Cavan or Monaghan in the 21 July final.

Down produced a huge effort in the second half but were always at least two points in arrears.

Despite the victory, Donegal will know this was not one of their best performances.

Down, beaten by Donegal in the Ulster final last year, will now go into the second round of the qualifiers in the All-Ireland Championship.

The Mourne men were given little chance of inflicting Donegal's first Ulster Championship in the three-year tenure of manager Jim McGuinness.

That analysis was reinforced when the favourites coasted into a four points lead - Murphy and McFadden picking up a point from play and a free each.

However, Down showed commendable resolve and scored three through Donal O'Hare frees.

It meant they were just six points to four in arrears at the interval, Murphy and McBrearty having landed scores for Donegal and Down skipper Mark Poland getting his side's only point from open play of the half.

Points were exchanged during the second half but Donegal always had a cushion of at least two points.

Burren prospect O'Hare was the game's top scorer with six points, five of them frees, but he ended on the losing side as Rory Kavanagh, Murphy (2) and McFadden (3) scored Donegal's second half points.