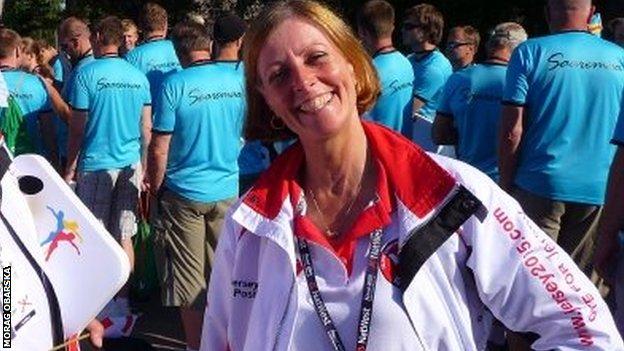 The secretary of Jersey's Island Games committee has been named as flag bearer for the opening ceremony of next month's event in Bermuda.

Madeleine Lee, a former tennis bronze medallist and team manager, will lead the Jersey squad into the arena.

"I'm absolutely over the moon, it's a great privilege to be given the task," she told BBC Radio Jersey.

"To me it's a great honour to represent the island and carry that flag in front of the team as we walk round."

If you go to the Games, it's so infectious, it's like one big happy family

Lee was one of three nominees for the role and her selection came exactly a month before the start of the Games, in which islands from around the world compete in a total of 16 sports.

"If you go to the Games, it's so infectious, it's like one big happy family and once you get into it you don't want to get out of it," added Lee.

"It's just great fun, something you can be proud of and we just all thoroughly enjoy it."

Traditionally, each team's youngest male and female representatives deliver water from their home island to be mixed together.

much smaller than for previous Games, because of the costs of travelling to Bermuda, an issue that has affected many of the competing teams.