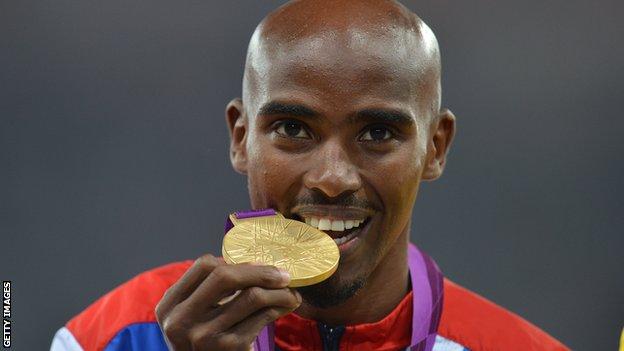 Stars of the London 2012 Olympic and Paralympic Games have been recognised in the New Year Honours list.

Double Olympic champion Mo Farah, plus heptathlete Jessica Ennis, rower Katherine Grainger and cyclist Victoria Pendleton have each been made a CBE. They all won gold in London.

Bradley Wiggins and Ben Ainslie are knighted. Sarah Storey is made a dame.

Britain's remarkable sporting year is reflected in a list dominated by athletes and coaches from the London Games.

Farah, 29, completed the 5,000m and 10,000m double in August, while Ennis claimed victory in the heptathlon. Grainger, 37, won gold at her fourth attempt, having taken silver in Sydney, Athens and Beijing.

Pendleton retired on a high after adding a gold and a silver to the gold medal she won in Beijing four years ago.

Weir's achievements saw him shortlisted for the BBC's Sports Personality of the Year award after a year in which he won four Paralympic gold medals to add to his two from Beijing. The 33-year-old also won his sixth London Marathon.

Dressage star Charlotte Dujardin and cyclists Jason Kenny and Laura Trott, who all won double gold at London 2012, have received OBEs, as has Andy Murray, who won the Olympic men's singles title before adding a maiden Grand Slam at the US Open.

"This has been an amazing year for British sport and I am proud to have been able to play my part," wrote Murray on his website. "Being recognised in such a way at the end of such a great season is the finishing touch on 2012."

Paralympic dressage star Sophie Christiansen, who won three golds in the summer, and swimmer Ellie Simmonds, who was shortlisted for BBC Sport's Personality of the year after winning two golds, a silver and bronze at London 2012, also get OBEs.

Simmonds, 18, said the award was the perfect way to round off a remarkable 2012 for her and her ParalympicsGB team-mates.

"It's been a great honour to be included in the list, which caps an amazing year for me personally and for British sport," she said.

In total, 29 athletes from ParalympicsGB have been recognised in the New Years Honours list following their achievements in the summer. Britain won a total of 120 medals, 34 of them gold, in London.

Tim Hollingsworth, chief executive of the British Paralympic Association, said: "Their performances on the field of play not only received rapturous applause from the crowds at London 2012 and viewers of the TV coverage - many of whom were experiencing Paralympic sport for the first time - but the 11 days of sport that we witnessed this summer also gripped the nation and changed many peoples' perception of disability sport.

"It is fitting that so many of our gold medallists are offered some of the highest tributes possible, which reflect not only their sporting talent but also the sheer hard work and dedication that they put into preparing for their home Games."

Gymnast Louis Smith, who won team bronze and individual silver at the Games, is made an MBE, a week after becoming the BBC's Strictly Come Dancing champion.

"To receive this honour is out of this world and something I never would have dreamt of as I grew up in the sport of gymnastics," said the 23-year-old Smith.

"This year has been like no other for so many reasons. I wasn't sure it could get any better but to be awarded an MBE is the icing on the cake and without a doubt the proudest moment of my life."