What becoming a Muslim entails. 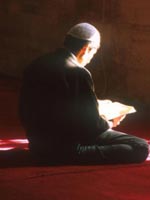 Muslim in prayer inside the Sehzade mosque, Istanbul, Turkey©

Becoming a Muslim requires a very simple act, but the meaning behind it is very deep.

You have to believe that there is only one God, Allah, who created the entire universe, and that Muhammad (peace be upon him) is his final messenger on earth.

If you recite this, with total sincerity, in front of two witnesses, you have become a Muslim. It really is as simple as that.

Muslims call this recitation the Shahadah, and refer to it as the first Pillar of Islam.

And if you become a Muslim by converting (some Muslims would say "reverting") to Islam your fellow Muslims will accept you as if you had been born a Muslim.

Becoming a Muslim takes you into a new world.

It's a world in which you are intensely aware of your relationship with Allah, and aware that everything in the world exists because Allah chose that it should.

This gives life a whole new meaning, it lifts many responsibilities, and replaces them with the single aim of living life in the way that Allah wants you to live it.

So when you become a Muslim you have to live Allah's way. Every moment of your life has to follow Allah's will. Every choice you make must be the choice that would please Allah.

This may sound pretty constricting to people brought up in cultures that put more emphasis on the individual and what they want. A Muslim would disagree.

Part of the family

Muslims think of themselves as members of one family©

Constantly in touch with Allah

Once a Muslim has accepted Allah as the one and only God, they have to establish a constant link with God in their everyday lives - prayer is perhaps the best way to do that, and prayer is the second Pillar of Islam.

If it's possible, a Muslim should pray five times a day, at set times, and facing Mecca. You can pray almost anywhere.

In mosques men and women pray separately; in some mosques this is done with the men at the front and the women behind, in other mosques there are separate rooms for men and women.

Muslims above the subsistence level must pay up 2.5% of their annual savings to help people in need

Prayer and belief are not enough to make someone a good Muslim. Islam is very concerned about looking after the welfare of poor people, and the Qur'an specifies that all Muslims above the subsistence level must pay up 2.5% of their annual savings to help people in need.

So once a year a Muslim works out 2.5% of everything they own, and hands it to an approved organisation to use for charitable purposes.

Muslims call this Zakat, and it's the third pillar of Islam.

It's not a religious tax, as some people (not Muslims) say; it's an act of worship, and it's something that pleases God: in fact in the Qur'an you'll find that prayer and zakat are frequently spoken of together.

Zakat is an act of worship that goes directly to making the world a better place for people who are up against it.

Paying Zakat also purifies the 97.5% of your wealth that remains, and you can use this as you wish with clear heart. You can use some of it for gifts to charity, but such spontaneous charity is called sadaqah, not Zakat.

Don't ever think of fiddling this calculation in order to pay less.

Cheating God never, ever works. Not just because all good deeds and bad deeds are assessed at the Day of Judgement, but also because if you cheat on your faith you cheat yourself of everything that being a good Muslim means.

Being poor and hungry

If you're a Muslim it's not enough just to give money for the poor; you're expected to understand what it feels like to be poor and hungry, and to go without food and drink.

So once a year, for a month called Ramadan, all Muslims fast from first light until sunset; abstaining from food, drink, sex, and smoking.

This fasting not only helps a Muslim understand the needy, it's a sort of ritual purification of themselves.

It's not just at Ramadan that Muslims abstain. When you become a Muslim you have to give up certain things like alcohol - khamr - and, of course, drugs for ever.

And Muslims don't go to places where alcohol is served - so if you want to discuss Islam with a Muslim friend, the pub is not the place to suggest.

You'll find that Muslims manage to have just as good a time without them as most people do with them - In fact they have a much better time.

Tobacco isn't banned in the Qur'an, but the Qur'anic principles suggest that smoking is not a good thing.