Award-winning writer Alan Spence considers the meaning of meditation and its practice from a Hindu perspective.

Inspired by his spiritual teacher Sri Chinmoy, award-winning writer Alan Spence considers the meaning of meditation and its practice from a Hindu perspective.

Meditation is silence, energising and fulfilling

The nice thing about being up early in the morning is the stillness, the silence. The hustle of the day hasn't really started, and it's a good time to just sit, quiet and meditate.

My spiritual teacher Sri Chinmoy - a man I've known for over 30 years - expresses it beautifully:

Meditation is silence, energising and fulfilling. Silence is the eloquent expression of the inexpressible.
The key word here is energising. That quiet place inside us is a source of tremendous strength. 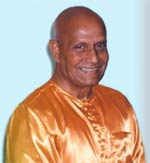 When we meditate what we actually do is enter into the deeper part of our being. Meditation is like going to the bottom of the sea, where everything is calm and tranquil. On the surface, there may be a multitude of waves, but the sea is not affected below. In its deepest depths it is all silence.

To enter into that place, now, first thing, is to tap that strength inside us, let it sustain us through the day.

When the waves come from the outside world, we are not affected. Fear, doubt, worry and all the earthly turmoils will just wash away.

Meditation is silence, energising and fulfilling.

Sri Chinmoy tells a story about a pious man who studies the scriptures devotedly, and likes to discuss philosophy with a scholar who comes to visit him. They earnestly discuss the path to spiritual liberation, but deep in his heart, the man knows this endless talk is not bringing him any closer to attaining his goal. Now, it happens that the man has a little caged bird in his room, and he likes to hear it sing. But one morning he notices the bird is not singing at all, it has fallen completely silent. He speaks to the bird, tries to coax it, but it makes not a sound. Eventually the man opens the cage door and the bird, in an instant, escapes, flies out of the cage, through the open window of the room, and soars into the infinite freedom of the sky.

We can talk endlessly, argue, discuss, debate. But the real truth of things, we discover in silence. Eventually we have to hush the mind and its chatter, discover that vastness in our hearts and soar into it.

That image of the bird in flight, going beyond the mundane, is at the heart of one of Sri Chinmoy's devotional songs:

And it recurs in one of his simple, beautiful, mantric poems:

My Lord, a tiny bird
Claims the vast sky.
Similarly the finite in me
Longs to claim
Your Infinite Absolute.

Some years ago I edited a little collection of writings on meditation by my teacher, Sri Chinmoy. I called it The Silent Teaching. I wrote in the introduction that the title might seem strange, even paradoxical. To the mind accustomed to regard teaching as instruction, or practical demonstration, the notion that such a process can be silent, wordless, might be difficult.

But in discussing meditation, we are moving in a realm where, traditionally, truth is communicated directly, in silence, by a look, a gesture, a touch.

One of the best-known examples is Buddha's Flower Sermon. The Buddha came to address a large gathering and his lecture consisted of holding up a flower! One of his followers, Maha Kashapa, responded by smiling, and Buddha said in that moment the disciple had received everything. The teaching is not conveyed in words, he said, but in silence.

Sri Chinmoy's background is Hindu, but he expressed the same truth: All real spiritual teachers teach in silence.

But beyond that again, he realises our own 'real teacher' is deep within.

Your mind has a flood of questions. There is but one teacher who can answer them. Who is the teacher? Your silence-loving heart.

This 'silence-loving heart' is receptivity itself. It is our capacity to be still, be open, and simply listen. The mind has all the questions. The heart has, and is, the answer.

Meditation speaks. It speaks in silence. It reveals that our life is Eternity itself.

The blossoming of our indomitable inner will

I've been talking a lot about silence. (And that's a typical paradox in itself - talking about silence!) But clearly there are different levels and qualities of silence.

There's an Indian story about four monks who decide, as a form of spiritual discipline, to maintain a day of silence. That way they can be more focussed and concentrated, not waste their energy on smalltalk or get into useless arguments.

Well, everything goes well throughout the day. They go about their tasks feeling very virtuous and showing each other great respect. Then towards evening, it starts to get dark, and one of the monks, who is busy preparing food, says "Somebody should light the lamp". The second monk turns to him and says, "You spoke!" The third monk says, "Will you two shut up!" And the fourth monk says, "Now I'm the only one who hasn't broken the vow of silence!"

Yet, as my teacher Sri Chinmoy says, there are deeper levels again. He talks about the outer silence and the inner silence, then about the inmost silence.

It is that dynamic quality which characterises true meditation:

Beyond speech and mind,
Into the river of ever-effulgent Light
My heart dives.
Today thousands of doors
Closed for millennia
Are opened wide.

Meditation is not an escape exercise

Recently I went to a performance by American artist Laurie Anderson. In the middle of the show she made a point about silence. She stood quite still, centre-stage, held total silence for a couple of minutes. The silence was fairly comfortable - this was a sophisticated audience, we knew our minimalism, our John Cage - this was one of those silences, right? Then she made the point that when that happened on radio, or even worse, on TV, it was cause for panic. Dead air! The void had to be filled!

Socially too - round a dinner table say - if a silence falls there's a nervousness, a clearing of throats, before someone kicks in with "Say... I, uh... saw this show on TV..." In such situations, there's a fear of silence, an embarrassment, a sense of feeling exposed.

And it's true, I think, at a deeper level, that silence is something we fear. Dead air. Fill the space. Switch on the TV. Plug in the headphones. Shout down the mobile phone. Anything rather than face the emptiness, for that would mean facing ourselves.

Meditation is that very act of facing ourselves, accepting the silence.

Meditation is not an escape exercise... The seeker who meditates is a divine warrior who faces suffering, ignorance and darkness and tries to establish the kingdom of wisdom-light.
And with perseverance, we reach the depths of our being, our true self.

When we meditate, what we actually do is enter into a vacant, calm, still, silent mind. We go deep within and approach our true existence, which is our soul.

The eternal Now is the only reality

At the start, I quoted from my teacher Sri Chinmoy, talking about meditation as a diving deep within. Here is another passage where he expands on that idea:

How do we meditate silently? Just by not talking, just by not using words, we are not doing silent meditation. Silent meditation is totally different. When we start meditating in silence, we feel the bottom of a sea within us and without. The life of activity, movement and restlessness is on the surface, but deep below, underneath our human life, there is poise and silence. We imagine this sea of silence within us, or we feel that we are nothing but a sea of poise itself.

And the ideal is to carry this poise into everyday life. The spiritual life is one of balance - silence at the heart of action, but also dynamism at the heart of silent meditation.

Sri Chinmoy once described the difference between prayer and meditation as follows: "When I pray, I talk and God listens. When I meditate, God talks and I listen".

Meditation is that listening, attentively and in silence, to the voice of the Absolute within us.

There is a special way to listen to the Voice of God, and that is to meditate in silence. Then there is no tomorrow, there is no such thing even as today. It is all now. The eternal Now is the only reality.