Hear the famous King's College Choir perform Christmas carols and find out the stories behind some favourite hymns.

The choir of King's College, Cambridge, performs a selection of Christmas carols.

Silent Night is one of the world's most popular Christmas carols. Every year it is sung in many different languages throughout the world. Its popularity is owed to its peaceful melody and its simple narration of the Christmas tale.

The traditional story of this song comes from the town of Oberndorf, Austria in the winter of 1818. The priest of this town was a young man and also a musician called Joseph Mohr.

On Christmas Eve that year, the church organ was broken and it could not be fixed until the snow melted in the spring. Joseph was not disheartened and was determined that there would be music that Christmas. He remembered a simple poem he had written two years earlier and thought if only he could find an alternative instrument and suitable melody they could sing it in church. He asked his church organist, a man named Franz Gruber, to look at the poem and see what he could do.

Franz was startled by how good the poem was and, used to writing music at short notice, came up with a soothing lullaby to accompany Joseph's words. That evening the song was sung in the local church with only a guitar as accompaniment.

The tradional story about a broken organ at St. Nicholas Church in Oberndorf is fiction from a story published in the U.S. in the 1930s.

Father Joseph Mohr wrote his six-stanza poem Stille Nacht! Heilige Nacht! in 1816 when he was assigned to a pilgrim church in Mariapfarr, Austria. Two years later, after a transfer to St. Nicholas Church in Oberndorf, Austria, the Catholic priest decided he wanted his poem set to music. On Dec. 24, 1818, he asked his friend Franz Gruber to create a melody and guitar accompaniment. The two men sang the carol at Christmas Mass in St. Nicholas Church with Fr. Mohr playing his guitar and the choir repeating the last two lines of each verse.

The man who translated Stille Nacht into Silent Night was John Freeman Young. While assigned to New York's Trinity Church, he translated European hymns into English as a hobby. Later in life he became the second Episcopal Bishop of Florida. Bishop Young is buried in Jacksonville, Florida, forgotten by the city he loved and ignored by the church he served, yet his words are sung by millions of people in English-speaking nations.

The Twelve Days of Christmas

The Twelve Days of Christmas is different from other Christmas carols, because it doesn't seem to have a religious theme and it doesn't deal with the Nativity.

The most likely origin of the carol is in a memory game played on Twelfth Night many years ago.

The players would sing a verse in turn and each player would add a new gift when it came to their own verse - the catch was that they had to remember the all the earlier gifts as they sang their way through the list of presents. Anyone who forgot a gift would have to pay a forfeit to entertain everyone else.

That's the story given by The New Oxford Book of Carols, which records that the version we sing nowadays was printed in 1864, although other versions appeared earlier.

The book goes on to point out that some people have tried to find religious images in this carol - suggesting, for example, that the partridge is a symbol of the devil. There's also a folk belief that if a girl walks backwards towards a pear tree and then round it three times she will see an image of the man she's going to marry.

But there's another story about this carol that gives it much greater religious significance. It's most unlikely to be true, but it illustrates the way in which a popular song can be reworked as a hymn or carol.

This 'urban legend' says that the song was written at a time when Roman Catholic worship was illegal in England and Catholics had to find covert ways of communicating their faith.

The Twelve Days of Christmas, the story goes, was written to contain the basic beliefs of Catholicism, masked in secular words.

Common form of the legend

Some of the concepts said to be symbolised by each gift vary between versions.

There's no evidence to suggest that the carol was written as a covert catechism - and since there's nothing particularly Roman Catholic in the concepts it contains there would have been no point in doing so, since the beliefs it's said to refer to could have been openly taught.

Perhaps the idea that the song was religious was inspired by number carols like The Seven Joys of Mary or The New Dial, a song that uses the hours of the clock to relate Christian concepts. Another folk song, Green Grow the Rushes-O, is closely related to The New Dial and it is full of hidden religious references which the writer Erik Routley has listed in his book The English Carol.

But, legend or not, if anyone wants a song to teach a few basic Christian beliefs and test their memory, The Twelve Days of Christmas would seem to fit the bill nicely.

Repeat adding one of these lines each time 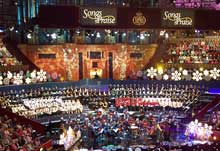 At the beginning of 2005, Songs of Praise viewers voted for their favourite carols.

In no particular order of popularity, the following ten carols were announced as the nation's favourites.

Once in Royal David's City

Mrs Cecil Frances Alexander was a country schoolmistress who wrote the words to help her pupils understand the mystery of the birth of Jesus and it was never intended to be kept only for Christmas. It was put together with Henry Gauntlett's simple tune Irby and has become a Christmas standard.

The original version of this carol was written in Latin and is commonly attributed to John Francis Wade, written around 1743. Entitled Adeste Fideles it was translated into the more familiar English version a century later by Frederick Oakeley and William Thomas Brooke.

This popular carol was written by Canon Michael Perry while he was a student at Oak Hill Theological College. He was one of the country's leading contemporary hymn writers. He died in 1996.

See Amid the Winter's Snow

This carol was written by Edward Caswall in 1858, who was also the translator of many popular hymns. The music Humility was written by John Goss in 1871.

This carol began life as the French poem Minuit, chrétiens written by Placide Cappeau in 1847 and was translated into English by John Sullivan Dwight. The music was composed by Adolphe-Charles Adam, who also wrote the ballet Giselle.

It Came Upon a Midnight Clear

This carol also began life as a poem, written in 1849 by Edmund Hamilton Sears, a Unitarian parish minister and author. The music was composd by American musician Richard Storrs Willis in 1850.

The words to this carol were written by an American clergyman called Philips Brooks in 1868 following a visit to Bethlehem. His organist, Lewis Redner, wrote a tune for it which is still used in the United States. In the UK, Forest Green, which was adapted by composer Ralph Vaughan Williams, is used instead.

In the Bleak Mid-winter

Christina Rossetti originally wrote the words to this carol as a Christmas poem. The tune most often associated with In the Bleak Midwinter is Cranham, composed by Gustav Holst, but it has also been put to music by organist Harold Edwin Darke.

Silent Night is one of the world's most popular Christmas carols. Read about its history

Charles Wesley, brother of John Wesley founder of the Methodist church, wrote this carol in 1739. We sing Hark the Herald Angels Sing to a famous tune by Felix Mendelssohn, written in 1840.