Exploring the future of television in the home, by cheaply prototyping as many possibilities as we can, using design fictions and half-resolution prototypes.

The rise of on-demand video represents a formidable challenge to the experience of television watching. The explosion in the quantity of video available makes it hard for people to choose and discover what to watch, given that their time and attention remain limited. Channels and schedules that people use as cues for coordination, planning, and decision-making are becoming less relevant, particularly to young people. Interfaces designed for navigating a few broadcast channels are not sufficient for managing this volume of video.

The main method currently used for addressing the problem of overwhelming choice tracks the behaviour of individuals and then presents them with personalised video and other media. This approach does not suit many types of watching, particularly watching with others - and we know that "co-watching" constitutes between a quarter and a third of TV watched in the UK. Tracking uses surveillance of people's online behaviour, which invades their privacy. It also assumes that what people want to watch is determinate and relatively stable, ignoring the way people change and are changed over time, including by the media they experience and the people they interact with.

We are exploring alternative futures for television, ones that both address the underlying user needs that people have for watching TV - which may include spending time with others, learning something new, or relaxing, for example - but that also take into account how people experience new technologies. The ultimate goal is to be able to describe the high-level characteristics of a really good experience of television in the home, and so provide direction for future technology and interface development. In the diagram below, we're trying to get to the "preferable" part of the future. 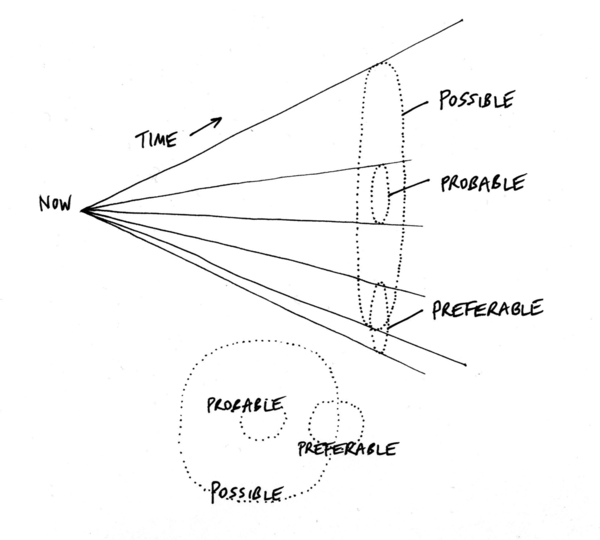 (Image by Stuart Candy, from his PhD thesis "The Futures of Everyday Life")

Exploring technologies in a way that gives us good information is expensive and time-consuming. Typcally we create prototypes to test with people in order to get feedback, because showing something is much better than explaining it: people usually need to experience something to give good feedback. However, prototyping is costly, and this cost means choosing a technical direction and basic set of features early on. If we are trying to think about where we want to be in 10-15 years, this cost is likely to mean that we will specialise too soon, without discovering most of the alternative possibilities.

In the Tellybox project we are exploring more of these possibilities with people by making many, very cheap, partial prototypes to show to people. To decide what the prototypes should be, we are using techniques to help us think widely, and interviews to understand people's current experiences of television. The prototypes are of low fidelity - "design fictions" (pretend packaging, reviews and adverts), which help us think through ideas and gain valuable feedback while keeping costs very low; and half-resolution prototypes, which have just enough functionality to spark people's imaginations about what it would be like to experience them for real.

BBC Taster - Tellybox: Something Something

Design fictions and half-resolution prototypes are a very inexpensive way for us gather high-quality feedback from people from about what they want and don't want from their television experiences, now and in the future. We can test a very wide range of ideas and features, without settling on one specific solution too soon.

For example, our first set of prototypes included a pretend forum thread with people describing their experiences of personalised soap operas; some packaging for micro-drone machine-learning media bees; plus video adverts for a robot teddy TV companion and a TV on which two people could watch different programmes at the same time.

All these were ideas based on our qualitative research: finding programmes relevant to me (Personalised Soap Opera), the problems of negotating with others what to watch (Bees), TV as a companion (Teddy), and the importance of being physically with others (Cross-eyed TV). When we showed them to people, Personalised Soap Opera initiated conversations about the value of collective experiences; Bees and Teddy led to conversations about privacy and the problems people experienced with machines making decisions for them, and Cross-eyed TV to discussions about the importance of being physically and mentally present with others.

The outcome of the project will be a set of high-level recommendations for future television experiences, which will may feed into future public-facing prototypes or products.