We are exploring how high-bandwidth low-latency mobile networks such as 5G can enable high-quality immersive experiences on mobile devices. Working with partners in the West of England Combined Authority’s 5G Smart Tourism project, we are developing and trialling a VR/AR experience at the Roman Baths in Bath to test whether emerging network technology can support these kinds of experiences, and whether end users find them useful.

Modern mobile phones offer great possibilities for providing rich AR and VR content, although this can often require a large quantity of data, particularly where 360-degree videos or highly-detailed animations are involved. This often limits what is possible, particularly for users who are on a mobile network. In this project we are investigating whether 5G technology can enable such visually-rich experiences, and what users think about them.

We have been working with partners in the 5G Smart Tourism project to focus on experiences that are designed to enhance a user’s visit to a particular place. We are developing and trialling an application that uses the so-called ‘magic window’ paradigm to show the user an alternative view of the place in which they are standing. This has obvious applications as a ‘window back in time’ for showing the history of an area, but could also be used to visualise other aspects, maybe though graphical overlays on a video captured in the present day to show information about the scene. 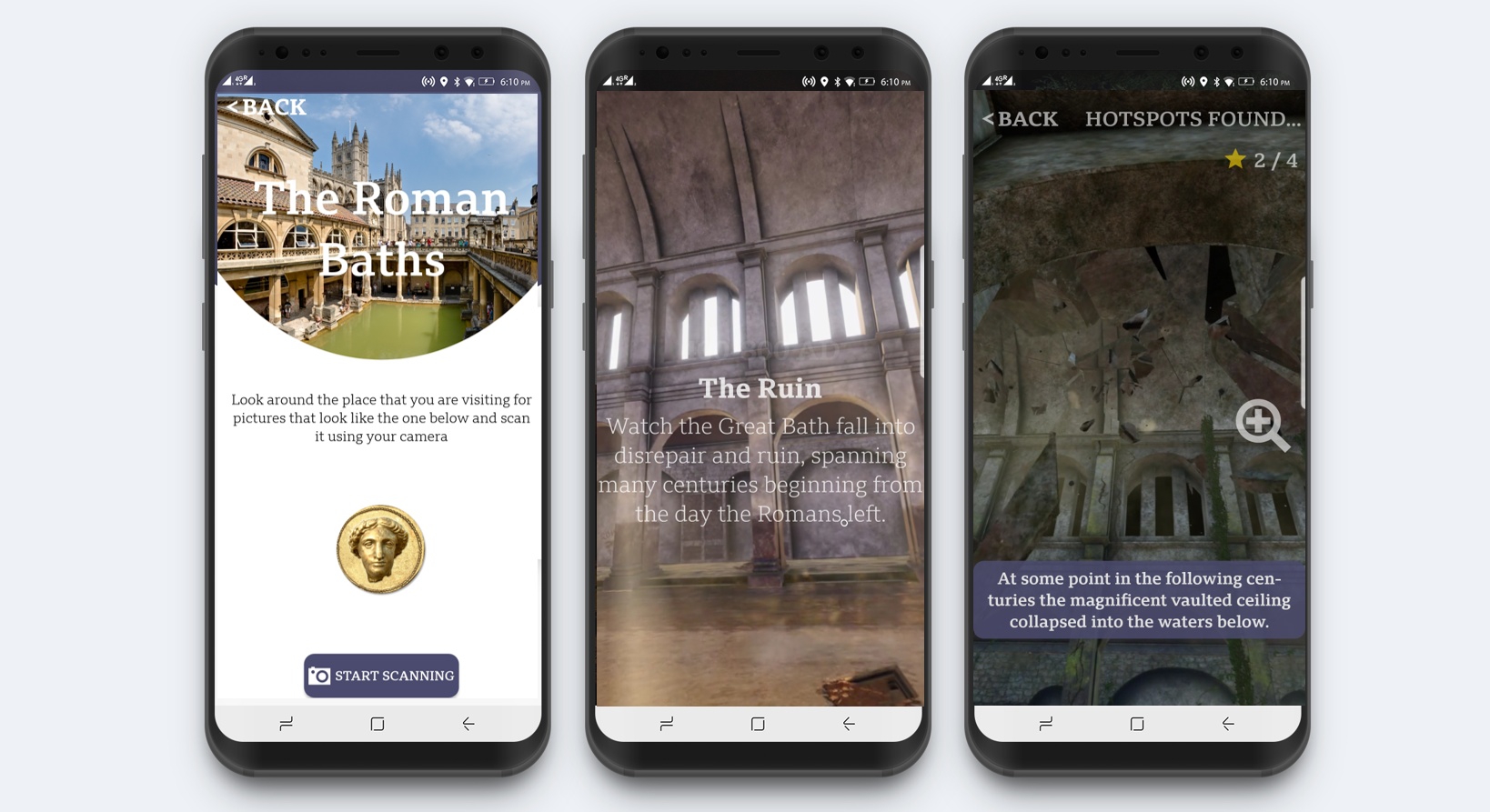 This approach has much in common with augmented reality, although showing a fully-rendered (or 360 video) virtual reality view rather than adding overlays to the live video from the user’s phone has several advantages:

In the 5G Smart Tourism project we developed and trialled an application at the Roman Baths in Bath, to visualise the Baths at times before and after the Roman period, complementing the information currently provided to visitors about the Roman period. The app tells the story of three periods: the mythical discovery of the hot springs by King Bladud, the Baths falling into disrepair when the Romans left, and the renovation in Victorian times. Each period was recreated by Aardman Animations as an animated 3D scene that plays for several minutes, with ‘hotspots’ that the user can discover to display interesting information about various parts. Each scene was designed to be viewed from a particular location in the Baths, and was triggered when the user points the phone camera at a picture mounted at the appropriate location. 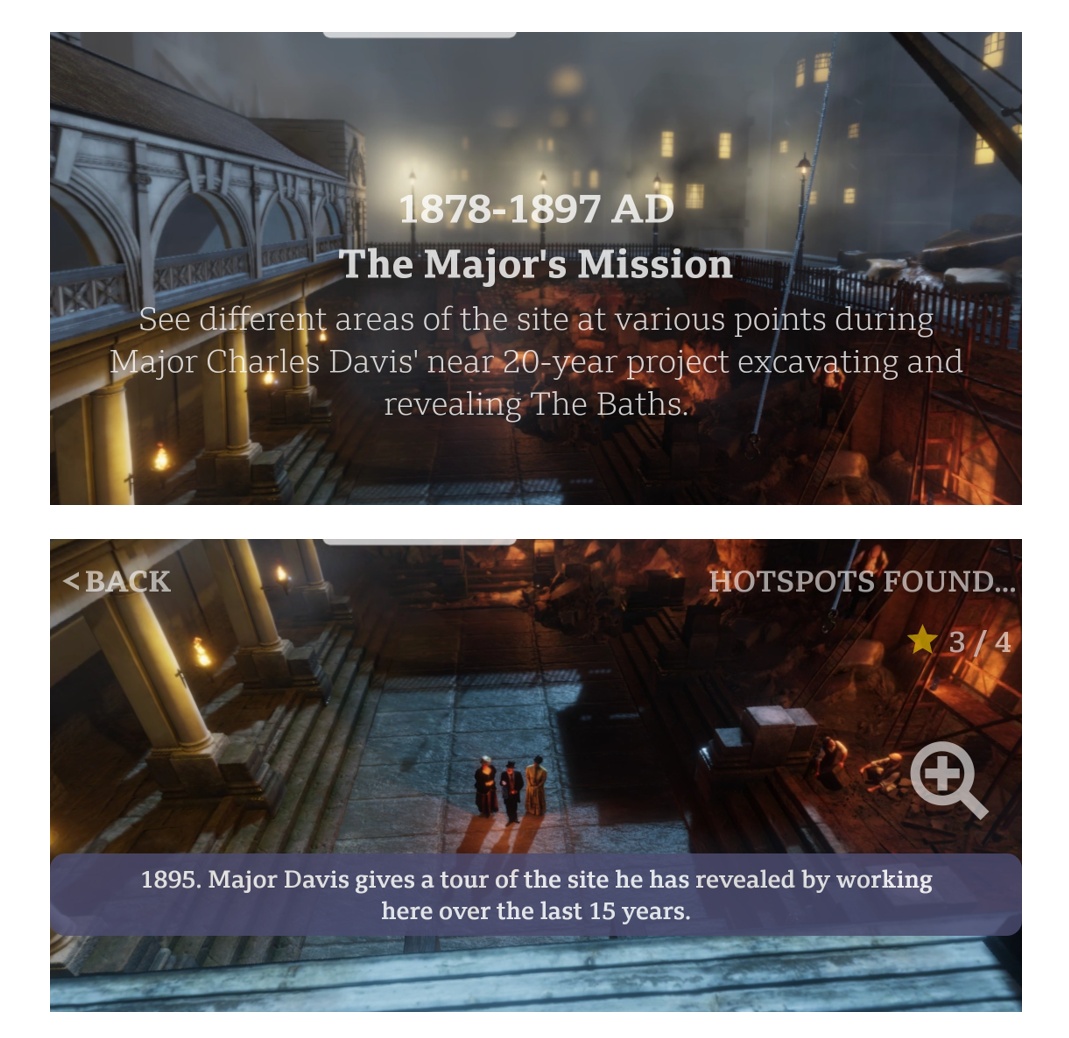 Scenes from the Victorian period as portrayed in the app

We initially investigated delivering the scenes as pre-rendered 360-degree video (4k x 2k resolution). We encoded the scenes using H264 at several bit rates in the range 5-40Mbit/s to investigate the trade-off between picture quality and loading/buffering time, and chose a rate of 10MBit/s. Conventional mobile networks (and many wi-fi installations) would struggle with the higher rates, particularly when there are around 20 simultaneous users in the same area, which is a realistic number for a site such as the Baths.

Our first set of trials were run at the Baths in December 2018 during closed evening sessions. The video will was hosted on ‘edge’ servers in the 5G core network, set up by the Smart Internet lab at Bristol University. The core network was linked to the Baths using a 60GHz mesh network provided by project partner CCS. The final link to the handsets used wi-fi, as 5G-enabled consumer handsets were not yet available. We logged technical data such as the loading/buffering times, as well as data about how the users explore the scenes, and gathering their opinions on the experience.

We ran a second set of trials in March 2019, when we investigated an alternative approach for delivering VR to mobile handsets, using remote rendering technology to render the scene in an edge server in the 5G network. We investigated the use of scene rendering and video encoding on the GPU in combination with the SRT low-latency streaming protocol. The low latency capabilities of 5G allowed us stream device orientation data to the server and send back the rendered video with no apparent delay (we were aiming for less than about 200ms for the end-to-end process from the user moving their phone to seeing the image move on the display).

However, it requires GPU-equipped compute nodes to be available in the network.

We hope that the results of our work will help inform the BBC about how best to exploit the capabilities of 5G networks for delivering new kinds of user experience, as well as improving our general understanding of how to use VR and AR technology to educate and entertain BBC audiences.

Further details of the trials, including an analysis of the user feedback can be found in BBC R&D White Paper 348.