One of the aims of the BBC Research & Development Audio Team is to enable the BBC to deliver great listening experiences to the audience, regardless of the audio devices that they’re using.

We’re good at creating immersive listening experiences using spatial audio on loudspeaker systems with a high channel count (for example, 5.1 surround sound), or on headphones with binaural audio. But only a really low proportion of the BBC audience have surround sound systems, and it’s not really appropriate to deliver shared experiences at home over headphones.

As one possible solution for this problem, we’ve been investigating the concept of device orchestration - that’s the idea of using any available devices that can play audio as part of a system for immersive and interactive audio playback. We’ve developed a framework for the key components of an orchestrated system.

We’ve recently launched a prototyping production tool called Audio Orchestrator. It enables quick and easy development of orchestrated audio experiences based on the framework described above. The tool is available through BBC MakerBox, which is both a platform for creators to access tools to enable exploration of new technologies and a community for discussion and sharing of ideas.

In this blog post, I’ll briefly summarise our work leading up to the development of the prototyping tool, and introduce Audio Orchestrator and some of its features.

In late 2018, we released a trial production—an audio drama called The Vostok-K Incident, as part of the S3A project research collaboration. It worked as a standard stereo audio drama but also used the orchestration framework to allow listeners to connect extra devices and report where they were positioned. This allowed us to deliver immersive sound effects and additional storyline content that adapted to the number of devices available.

Producing The Vostok-K Incident was much more time consuming than a standard audio drama and required a bespoke toolchain. We evaluated listeners’ responses to the trial, finding that there were some significant benefits to this type of audio reproduction and also some factors to consider for future productions. One such suggestion was exploring different genres of content, not just audio drama. To do this, we needed to be able to create content much more quickly—and also enable other people to create experiences.

We planned a set of workshops with production teams to explore how they might want to use device orchestration in their work. We started building a simple prototyping tool so that we could quickly and easily build prototypes during those workshops. The first iteration of the prototyping tool required the user to write some metadata describing the orchestrated experience in an Excel spreadsheet and import that, alongside some audio files, into the tool. Users could then preview the experience they’d built in a basic template application. 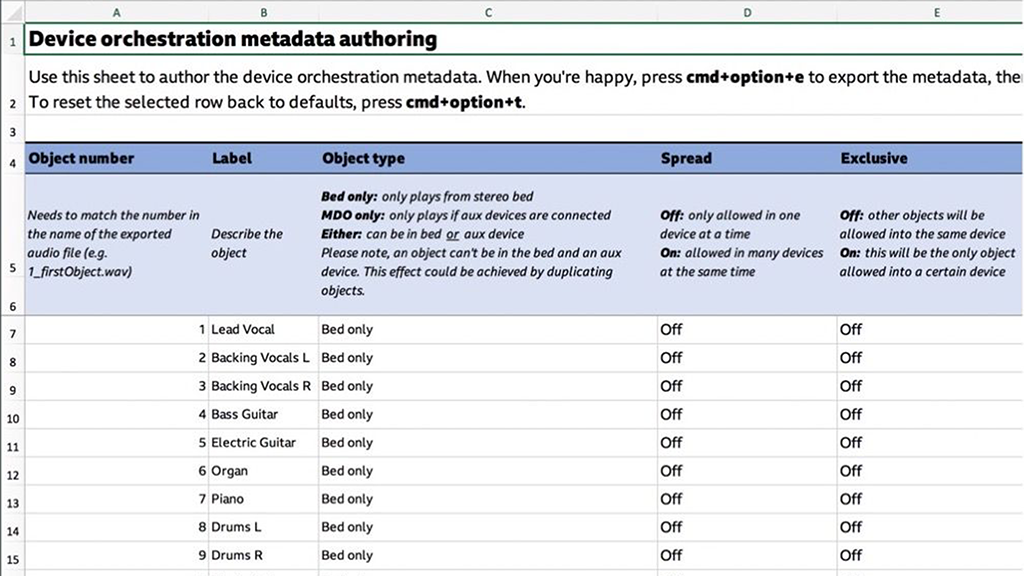 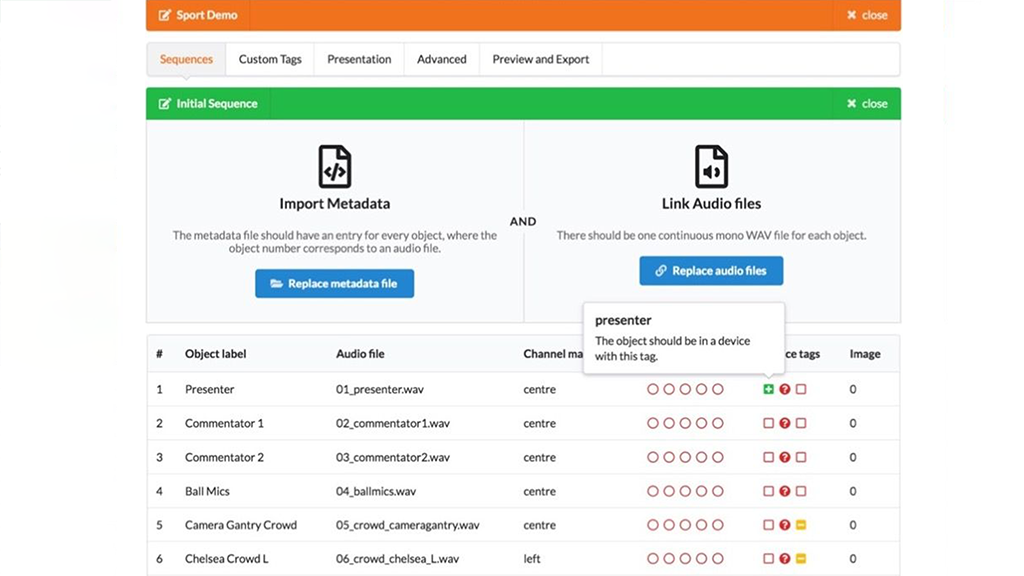 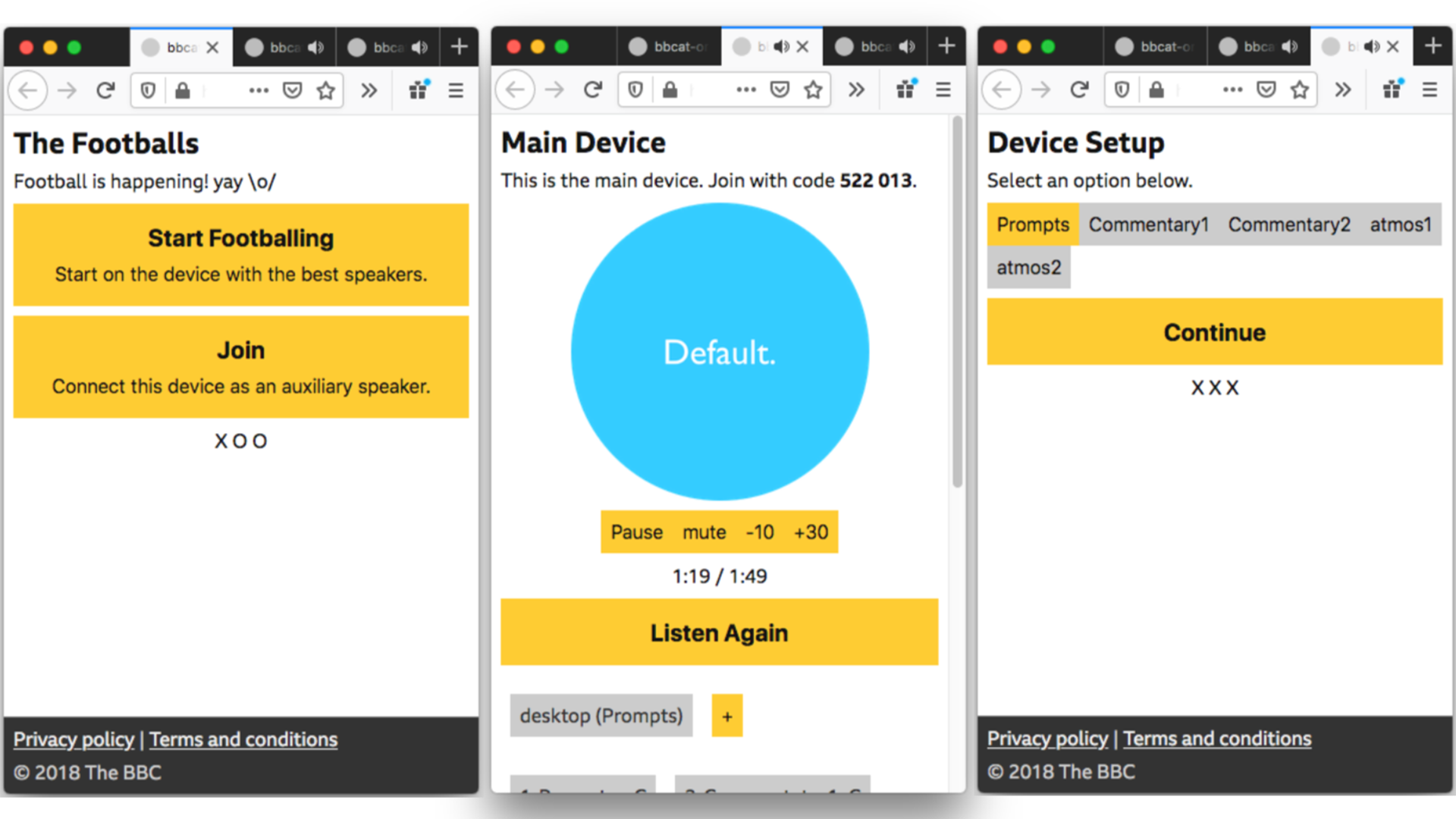 Above: An early version of the template application. On the left: starting a new session or joining an existing one. In the centre: the playing page. On the right: user controls on a connected device.

The first few workshops were enough to convince us of the value of developing the prototyping tool further so that it could be used to produce more, better orchestrated experiences.

Based on what we learned from using the tool in workshops, we went back to the drawing board to make significant improvements to the framework and the prototyping tool. 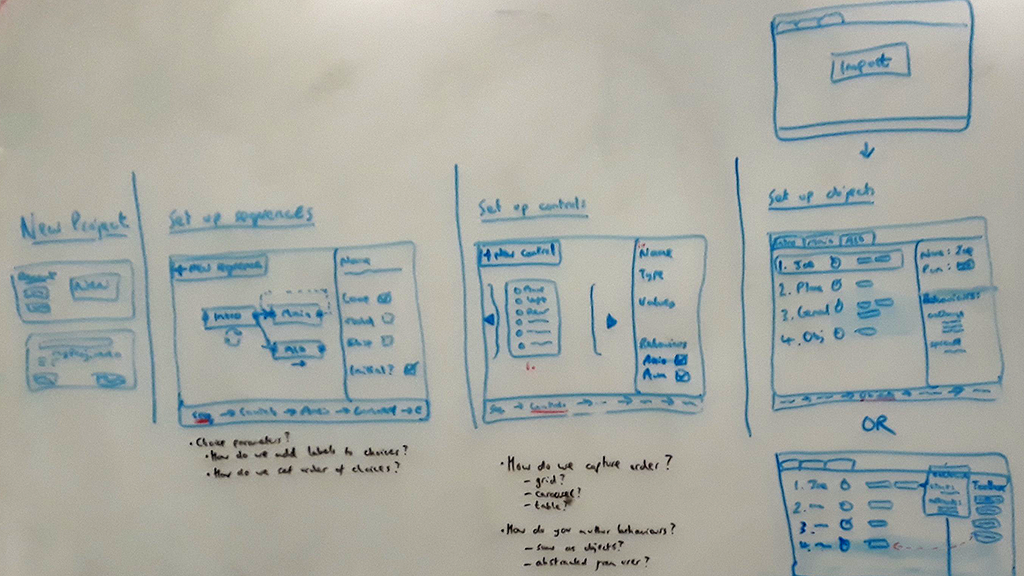 A whiteboard session to redesign the Audio Orchestrator workflow. 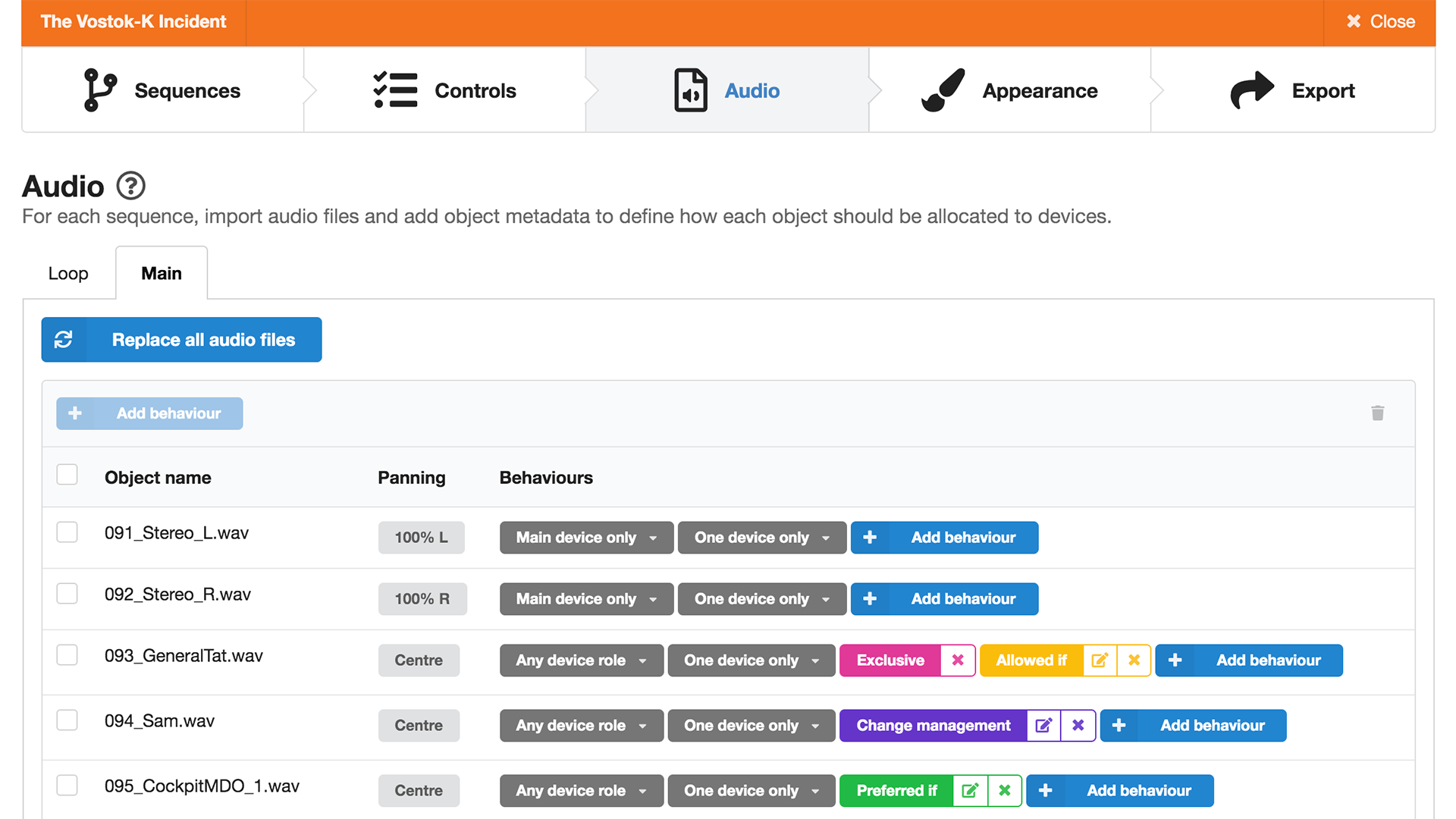 Above: Adding behaviours to audio objects in Audio Orchestrator.
Below: The prototype application. Left: start a new session or join an existing one. Centre: the playing page. Right: joining instructions, also showing how many devices are connected. 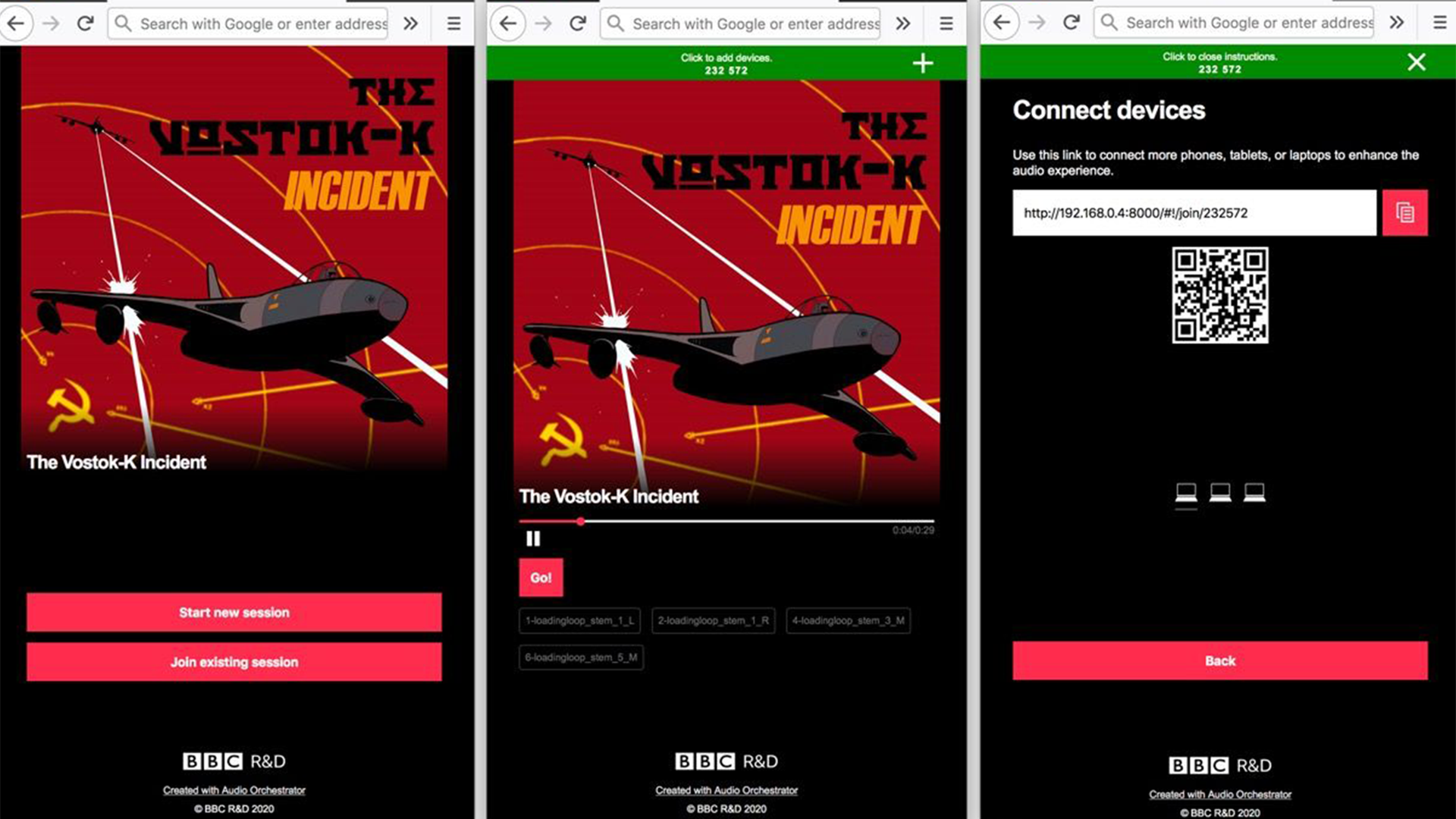 Growing a community of practice

I’ve given a very brief overview of how Audio Orchestrator works, but there’s way more detail in the documentation, which is available online.

Our main reason for making Audio Orchestrator available to the community is to investigate the creative opportunities of the device orchestration technology. The tool is available free for non-commercial use—you can request access from the MakerBox webpage. The MakerBox Community forum provides a meeting place for people working on orchestrated audio to share ideas, ask for help, and provide feedback on the process. We’ll also be using this to share example projects and our thoughts, as well as organising workshops and events.

We’re really excited to see what new experiences everyone creates!