BBC Research & Development have created a broad set of Look-Up Tables (LUTs) to use when creating a High Dynamic Range (HDR) programme. They have been successfully used in large productions, both pre-recorded (conversion of S-log3 content for the Queen’s Christmas Broadcast) and live (FA Cup, Super Bowl LIV). The LUTs complement the new, simplified HDR workflow that the BBC have been using, and licensing to others to use.

Display-light conversions, which preserve the colour and appearance of content after conversion:

Scene-light conversions, which should be used for colour-matching cameras in live production:

Test LUTs to verify the correct operation of LUT hardware.

However, due to the variety of SDR camera implementations, and the wide range of LUT capabilities, there are several LUT variants in the BBC R&D pack. This blog post summarises the variants and aims to help you decide which is the best for your needs. For a fuller reference, please see the LUT release notes, implementation guidelines and production guidelines.

LUTs are available which cover a number of code value ranges. This figure from the European Broadcasting Union (EBU) document on video ranges shows the "narrow-range" video levels in use by broadcasters. It also depicts in grey the "file-full" and "SDI-full" ranges in use elsewhere. It should be noted that there is a difference in terminology between the EBU and the International Telecommunication Union (ITU) where what is termed "file-full" by the EBU is called "full-range" by the ITU. We have used the ITU terminology in this blog post. 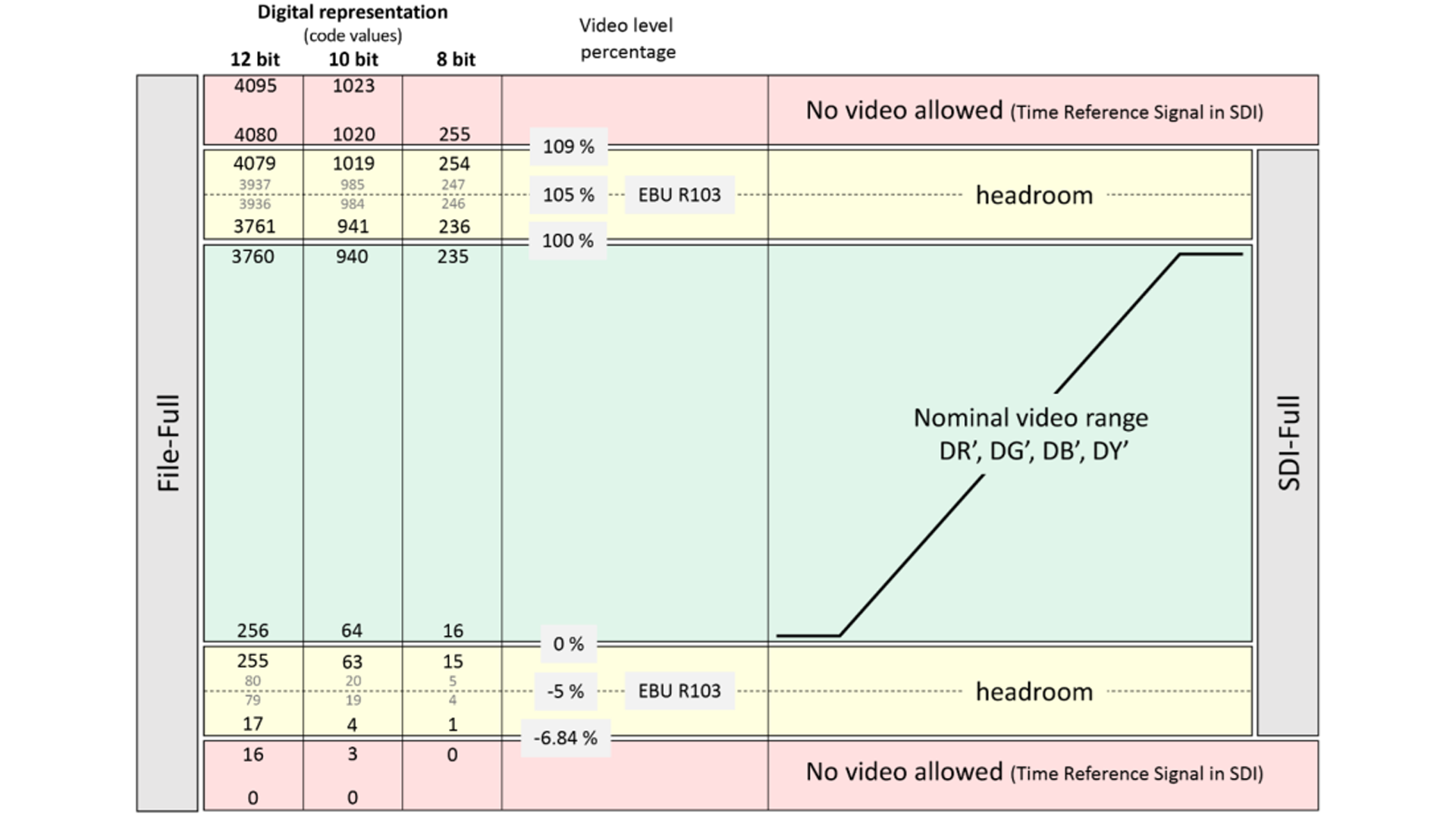 The formats of ITU-R BT.2100 HLG and ITU-R BT.709 video in use by TV broadcasters are known as "narrow-range" formats. These use the nominal video range illustrated, with headroom to allow for over- and under-shoots caused by ringing in video filters, compression artefacts and short-term exposure fluctuations as a result of varying lighting conditions. Values outside of this nominal range are allowed (they are not as some sources suggest "illegal") but are meant for transient signals.

Cinematic workflows, e.g. DCI X'Y'Z', have traditional made heavy use of computer graphics. So they tend to follow the PC graphics convention of mapping the nominal signal range across the entire 10- or 12-bit code value range, with black at code value 0 and peak white at 10-bit 1023 or 12-bit 4095. Unlike television formats, they do not provide any "headroom" for over-shoots or under-shoots. These are known as "full-range" formats.

We provide three types of LUTs which work in the following signal and processing ranges, to support both television and cinematic workflows: 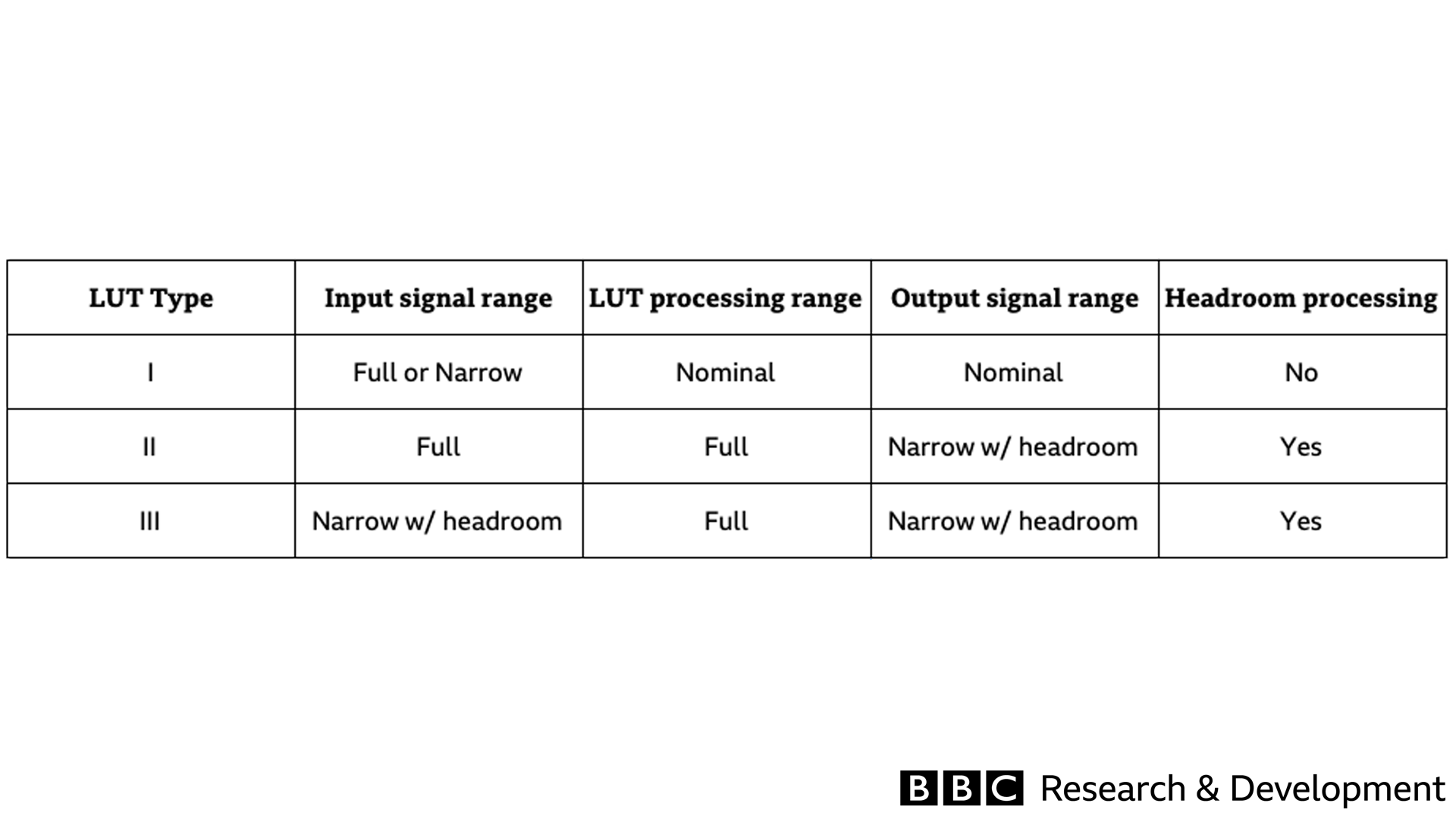 Not all types are provided for each of the transforms we create.

Type I LUTs can be used with either full- or narrow-range signals, with the appropriate external scaling. They are intended for software applications and older hardware LUTs which only operate over the nominal signal range. So care is needed to ensure the correct input and output scaling are selected for the different signal range types.

Type II LUTs are provided to convert from full-range ITU-R BT.2100 PQ (as used in some cinematic workflows) or Sony S-Log3 to the narrow-range HLG television format.

Type III LUTs are most suitable for television operations. They are intended for narrow-range signals, but they process the entire (full-range) signal range, including the headroom provided for over- and under-shoots.

Ultimately, the correct choice of LUT will be determined by the capabilities of the hardware or software in use. The LUT pack contains test LUTs and information to enable you to measure what type of LUT file your device requires.

Standard dynamic range video and high dynamic range video use two different video standards (ITU-R BT.709 and ITU-R BT.2100, respectively) and, because of their different colour primaries, each has its own, different colour matrices for mapping Y'C'BC'R (as used in most video formats) to R'G'B' and vice versa. The LUT hardware should use the correct matrix for ITU-R BT.2100, where these signals appear on its input or output. But some older units, or units designed for use with bandwidths up to 3Gbps (enough for 1080p59.94) only implement the ITU-R BT.709 colour matrices. If your LUT unit has no setting for input and output colour system, you will probably need to use the compensated variants of the LUT which pre-correct for this wrong matrix use.

When converting from SDR to HDR, content can either be "directly-mapped" into SDR or "up-mapped". Direct-mapping preserves the "look" of the SDR content after conversion. Up-mapping applies some highlight expansion to better match the "look" of native HDR sources. Up-mapping LUTs are usually recommended for cameras and graded HDR content. Do not use highlight expansion with graphics as any large areas of bright, flat colours will appear too bright in the HDR image, and affect the perception of the underlying video; use direct-mapping instead.

When down-mapping from HDR to SDR, image highlights need to be compressed. We offer two variants:

Harsh: closely resembles the look of current live sports production, placing the image highlights in the SDR "super-white" region, above peak white. Signals in the "super-white" region may be clipped by some down-stream processing, so use with care.

Normal: an attempt to create SDR pictures with more details and colour saturation in the image highlights details but at the expense of a slight reduction in overall image brightness.

Both use the same colour gamut reduction library, which aims to maintain the hue of pixels as far as possible.

The choice of which to use is aesthetic; you may choose to differentiate between the highlight portrayal in HDR and SDR services or try to deliver more of the benefits from the HDR production to SDR audiences.

When ITU-R BT.709 (the high definition SDR camera opto-electronic transfer function) was standardized in the 1990s, they included the traditional linear portion, which reduces the noise in the low-lights but has the effect of also crushing detail in shadows. Some manufacturers, however, use a different curve which more closely approximates a square root, and use other techniques to reduce noise. The "strict" LUTs use the equation in ITU-R BT.709, the non-strict LUTs use a gamma approximation. If you're using non-HDR cameras in a live production workflow or you're using both the HDR and SDR outputs of a camera, you need to assess which LUTs (strict or non-strict) best match the SDR video in use. Because HLG uses a square root in its lower portion, a better match between HDR and SDR cameras is usually possible if the SDR camera does the same - some cameras now offer both variants. This needs to be assessed using a camera test chart and a waveform monitor. If you have SDR cameras from multiple vendors, you may need to choose a single conversion due to hardware constraints, and you may have to accept a non-perfect match (as you would in an SDR only production).

Using the LUTs provided, the BBC's current preferred method of HDR production (a single production workflow with SDR down-conversion for camera racking and HD programme output) can be achieved. LUTs are also available for other specialist conversions, such as S-log3 to HLG and from HLG to DCI-X'Y'Z' for cinematic display.

What Hi-Fi - BBC 4K HDR iPlayer: after Wimbledon and the World Cup, where next?

Gizmodo - 4K Vision: Inside The BBC's Journey To Making TV In Ultra-HD