The BBC Box project is a prototype device that pulls together data about you into one place, under your control, and then allows applications to be built on top of this collection.

Our colleagues have been building prototypes to explore what possible services the BBC (and others) could provide to people linked to their personal data. Inspired by this work, and as part of our series of small projects investigating the theme of better internet, we worked together for two weeks to think about these kinds of 'data services' and how they might be combined to make interesting and useful things.

This post describes how we developed a process to generate ideas for the BBC Box, and illustrates what we got out of it.

Data services are quite an abstract concept, so to structure our conversations we extended a process we’ve been using for a few years. It is based on the physical card-based ‘inventotron' (which Richard Sewell, JHR and Libby created for EMFCamp in 2016). In turn, this is based on some well-understood ways of enhancing creativity, including the Cut-up Technique, as used by the Dadaists and David Bowie. By mashing together different concrete ideas, you can surprise your brain into thinking of new ideas, and then abstract these back into potentially useful services. The key is to generate many ideas and then keep the good ones.

First of all, we compiled a list of user needs, derived from our existing user research from the Better Radio Experiences project. That project was about young people and their experiences of music in particular, but our in-depth diary studies and interviews with them revealed some of their underlying wider needs, for example:

We started with user needs in order to prime ourselves in all our subsequent thinking to put people at the centre of our ideas. It's all too easy to get over-excited in technology and not think about the people who will use it.

We then broke down the idea of a ‘BBC Box’ into some constituent elements, what a collection of your user data might be like, or even something else built with your data. For example:

We did this independently. It's a very useful way of thinking about what a new product or service could mean to people, as well as drawing out some of the implications of what you are building.

Finally, we thought of a list of possible data sources, disregarding for the moment questions of how easy or difficult it would be to get them. For this, we used the data sources on our phones as a starting point and then broadened it out to more general data services. For example:

Libby then wrote a simple Slackbot. Slack is a text chat tool we frequently use at work and is particularly useful when some of us are working from home or at a different site. Slackbots are very simple to make and can listen for messages, send messages to channels, and post images. If you are all in one physical place, physical cards can be used instead, as with the Inventotron.

This bot obeys a few commands but is essentially a tool to randomise selections from lists (for example from Trello or a spreadsheet). To start, you ask it for a user need: 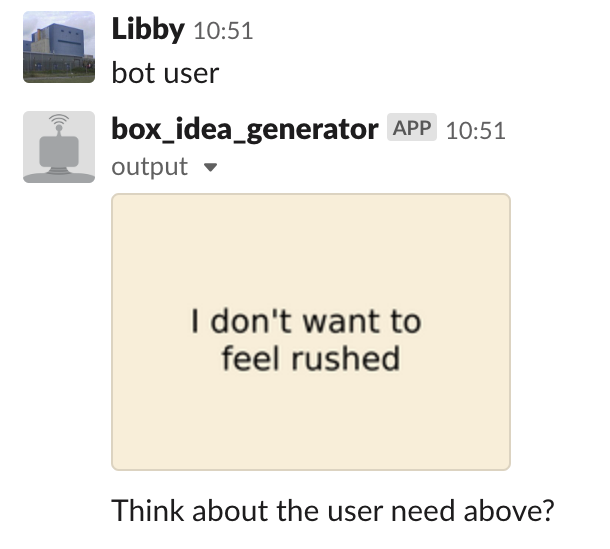 And then you ask it for some randomised cards. The bot combines two cards: one is a possible data source, and the other is one of the ‘Box’ analogies: 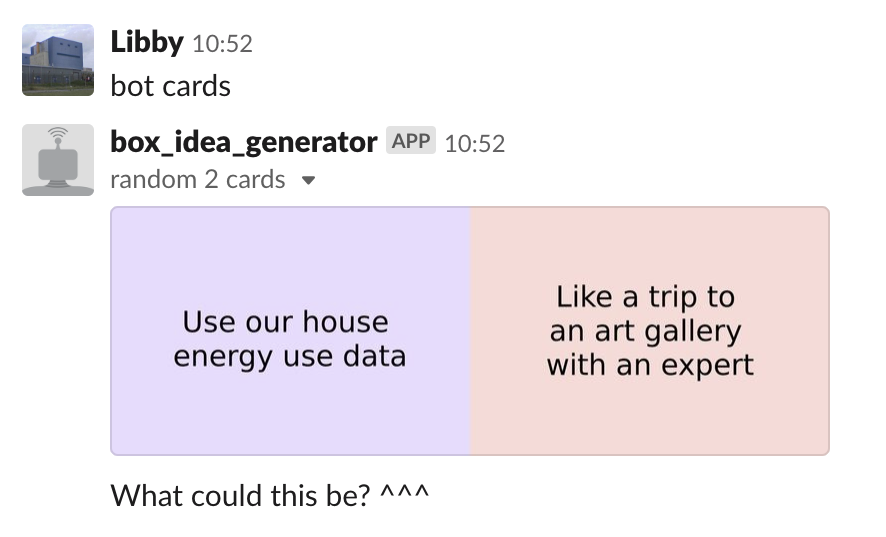 Our abstract question "What data services could we make?" has become "For someone who doesn't want to be rushed, how could our house energy data be used like a trip to an art gallery?". Which is a much more tractable question because it gives us some context and limitations, especially if we purposely do not exclude silly or impossible or partial ideas.

An essential part of this part of the process is to let people think on their own, to stop one person dominating the conversation. When people have thought for a minute or two and written their ideas down, one on each post-it note, we then do a game of snap - going round the group, shouting out the ideas: who has the same or related ideas? What else does this inspire in conversation? If anything comes up, we make a note of it.

There are no wrong answers at this stage. The 'snap' part is beneficial because it means we don't have to separately group the ideas later, and the grouping comes from within the team rather than being imposed.

In our example, we might get partial ideas addressing parts of the problem or all of it, such as:

You can see these are vague half-ideas. That's absolutely fine. A later part of this process involves selection and refinement, but not here.

The bot also has several wildcards - making it weirder, being nicer, upping the ambition and a reminder to focus on the BBC Box. Anyone can play one of these if they feel the conversation is getting too obvious, dystopian, generic or simply too trivial. 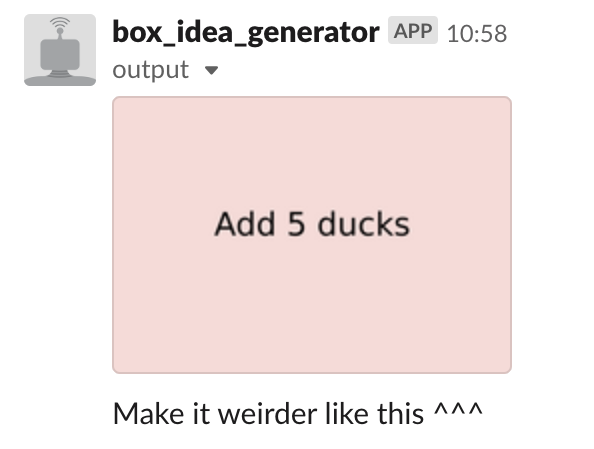 The 'weirder' card is to expand our thinking and stop us working on things that already exist. 'Add five ducks' is a surprisingly useful one and Libby's favourite. Maybe the ducks could flock in ways that illustrate your data (or possibly other birds would be better at this). Perhaps there are different nature-inspired ways of making your data more meaningful.

As a group, some remote, some on audio/Slack, we rapidly generated ideas based on the card scenarios. David captured all the thoughts and half-ideas in a sketchnotes format, and after three sessions, we had sixteen illustrated ideas.

We also captured what we had learned from each session, to improve the next one - you can see a few of both of those below: 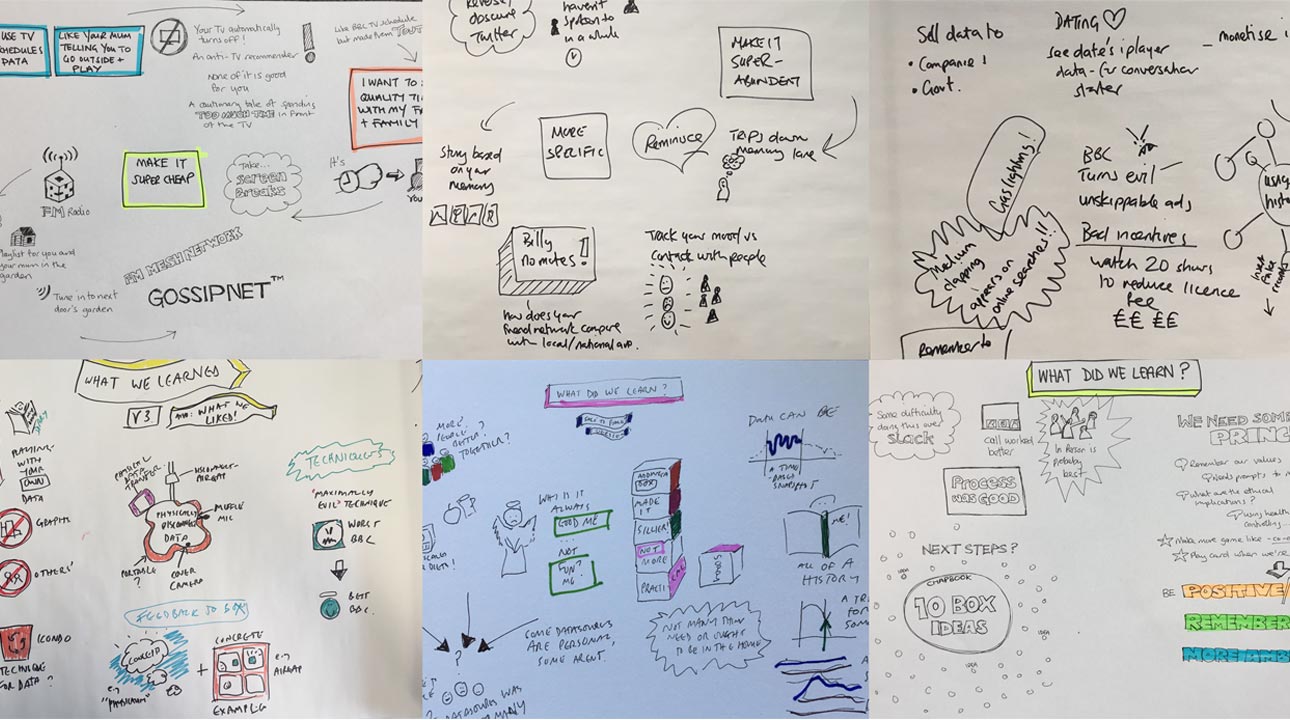 Clear themes were emerging, and we wanted to capture these, so Alicia and Kristine in our team had a go at sketch-noting those. The main themes we found were: 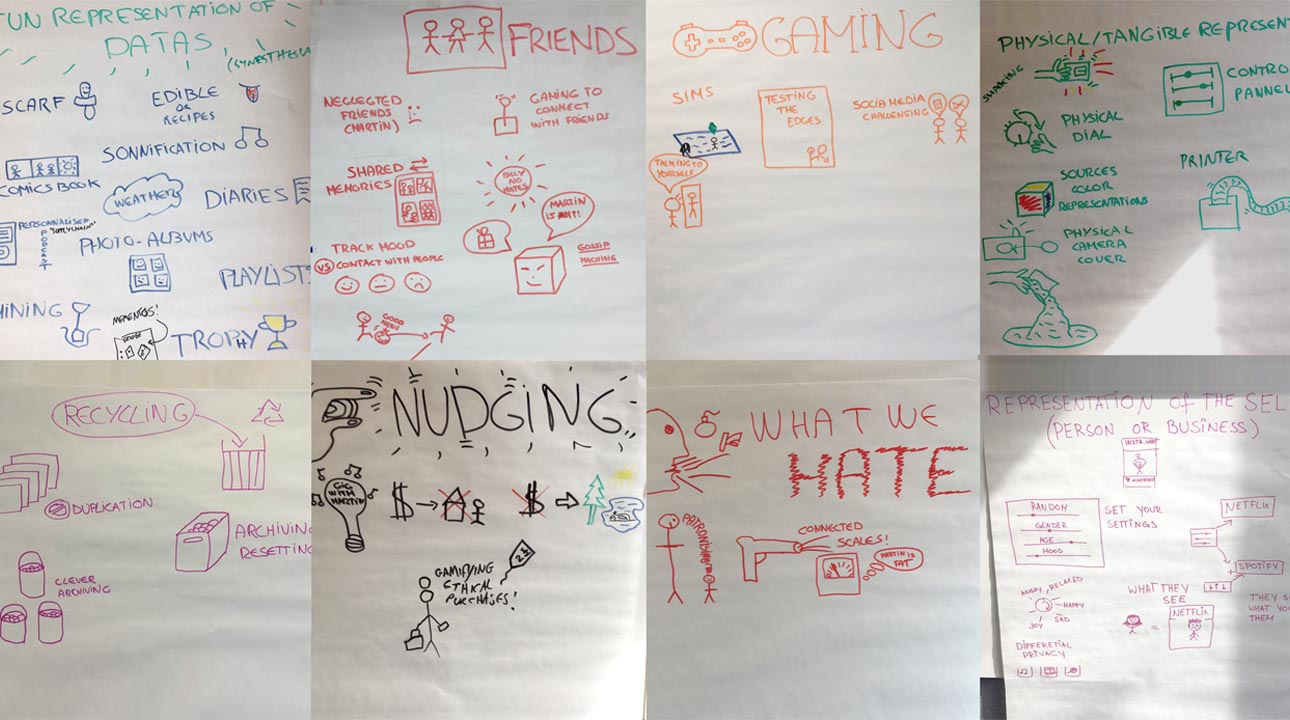 As we did with Tellybox and Better Radio Experiences, instead of voting on them, we each chose an idea we felt most interested in and worked on these individually. The objective here was to create an illustration or advert, where the concept has been distilled so that it can be presented clearly on one page. We find that this 'no-compromise' method is a good way of maintaining everyone’s enthusiasm, which helps them evolve and develop their idea.

You can see Tim's 'Personal Fulfilment Podcast' idea below, which was developed from a similar set of cards to the example ones above. It's a personalised podcast describing where the products you have bought come from and the carbon cost of getting them, with academic experts in their fields. You can spot its provenance - experts guiding you through your data like an art gallery - but it's an entirely new idea, and quite finished and doable. 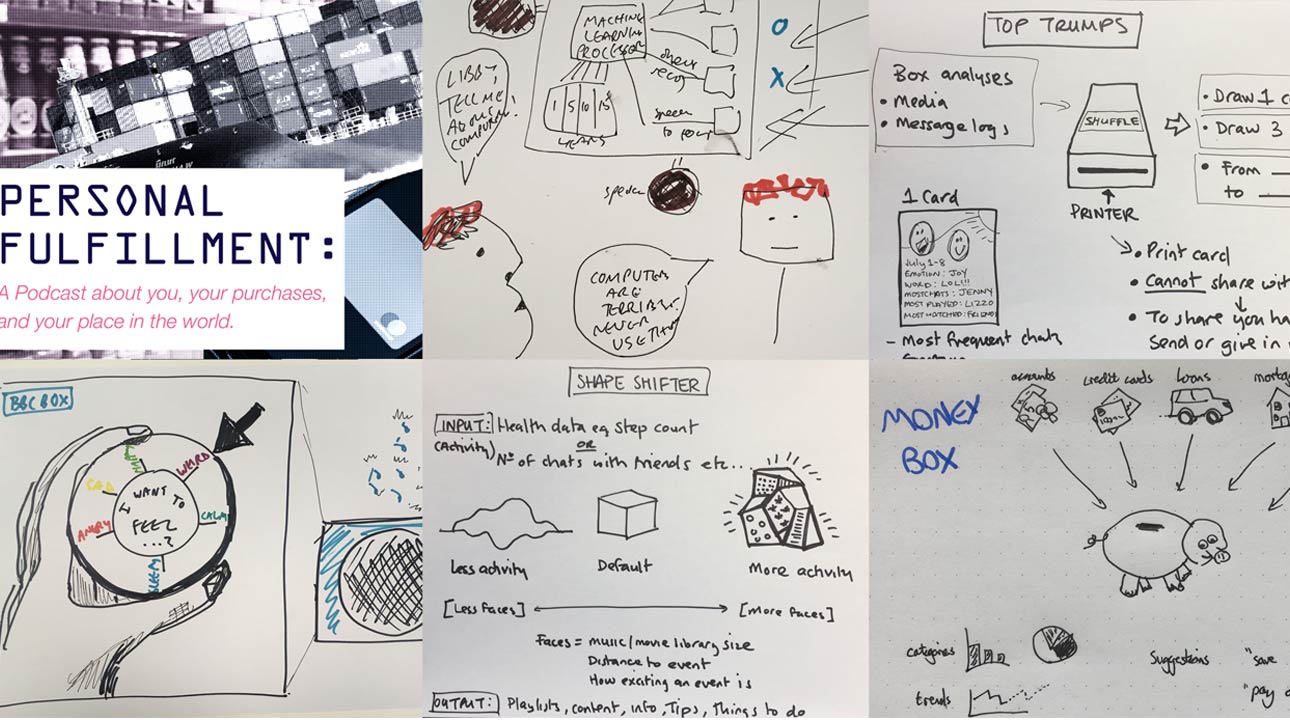 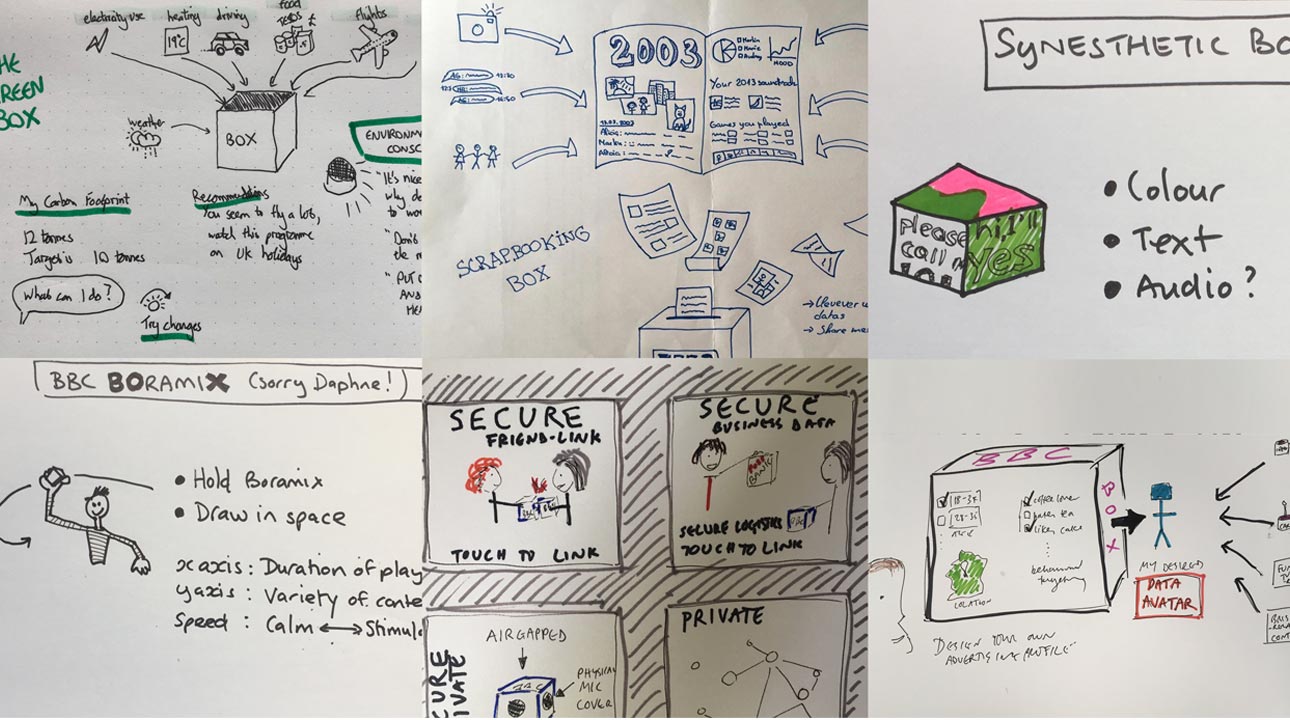 Finally, David created illustrations for ten of these and made them into a book, so that we had something to show people and a document describing the work. This short project was highly productive for us in three different ways.

Firstly, we invented some new ways of working together to produce novel ideas, and to do this even if one or more of us was remote. Particularly interesting were:

These were inspired by card-based workshops and idea-generating techniques we’ve worked on (with Richard Sewell in particular) in the past, but here we pushed them further to fit our working models and made them into a simple process we can reuse and share.

Secondly, it got us thinking deeply about data services: what they might be for and what they might be. As we collaborate further with our colleagues working on Box, we need to get a better understanding of what services might entail and any advantages or problems that might result.

We had a particularly interesting conversation about the purpose of ‘self-improvement’ applications, the nature of ‘nudging’ and the importance of self-reflection. When we are making services that aim to encourage people to behave in a particular way (e.g. eat healthily, exercise), we believe those services should do so by transparently encouraging reflective thinking rather than instinctive behaviour. In Kahneman's terms, this is 'system 2' rather than 'system 1' thinking. For more on this, see Exposure diversity as a design principle for recommender systems, by Natali Helberger, Kari Karppinen and Lucia D’Acunto.

Thirdly, so far, the process has generated two additional separate projects. Memories surfaced in several ideas, so we decided to run our own study on how young people curate and revisit memories both online and off, to understand more about the place of memory in a digital world. And inspired by the "Robotic Self-oracle" concept about talking to a past version of yourself, Libby developed the real_team_internet, eight GPT-2-based Slackbots based on our chat logs. We'll write more on these in separate posts.